» 9/11 Post. September 11th, 2013 Every year teachers let me know that this post has become part of their classroom 9/11 curriculum, so I will continue to post it every year. 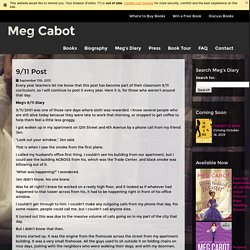 Here it is, for those who weren’t around that day: Meg’s 9/11 Diary 9/11/2001 was one of those rare days where sloth was rewarded. I know several people who are still alive today because they were late to work that morning, or stopped to get coffee to help them feel a little less groggy. I got woken up in my apartment on 12th Street and 4th Avenue by a phone call from my friend Jen. “Look out your window,” Jen said. That is when I saw the smoke from the first plane. I called my husband’s office first thing. Georgia Scholarships - Niche. Register to get personalized scholarship matchesNiche will find the best scholarships just for you Offered byNicheDescriptionStudents can use the money to help cover tuition, housing, meal plans, books, computers, or any education-related expenses.How to apply Offered byScholarship PointsDescriptionScholarshipPoints.com will give away more than $100,000 in scholarships this year including this $10,000 scholarship! 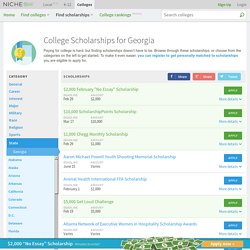 How to apply Offered byCheggDescriptionExcited for college? Chegg wants to know what part of college your most looking forward to and why. RenewableNoOffered byAaron Michael Powell Youth Shooting MemorialP.O. RenewableNoOffered byNational FFA OrganizationP.O. Offered byAlliance for Climate EducationDescriptionJoin the Get Loud Challenge, a game to raise awareness on the issue of climate change while earning amazing prizes along the way. RenewableNoOffered byNetwork of Executive Women in Hospitality, Atlanta141 New Street #234Decatur, GA 30030EligibilityUnknown may apply. 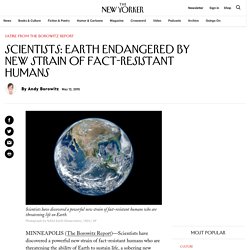 The research, conducted by the University of Minnesota, identifies a virulent strain of humans who are virtually immune to any form of verifiable knowledge, leaving scientists at a loss as to how to combat them. “These humans appear to have all the faculties necessary to receive and process information,” Davis Logsdon, one of the scientists who contributed to the study, said. “And yet, somehow, they have developed defenses that, for all intents and purposes, have rendered those faculties totally inactive.” 50 Of The Most Beautiful Sentences In Literature. Buzzfeed asked their community to tell them about their favorite lines from literature. 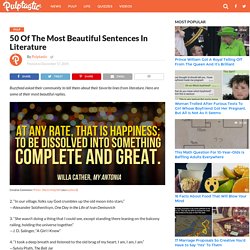 Here are some of their most beautiful replies. Creative Commons / Flickr: 58621196@N05 (via buzzfeed) One CEO says résumés are a thing of the past — here's what he looks at instead. Bob Pritchett, cofounder and CEO of Faithlife. 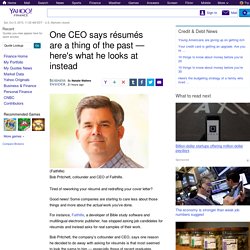 Tired of reworking your résumé and redrafting your cover letter? Good news! Some companies are starting to care less about those things and more about the actual work you've done. For instance, Faithlife, a developer of Bible study software and multilingual electronic publisher, has stopped asking job candidates for résumés and instead asks for real samples of their work. What Is a Hero? - The New York Times. Video We often talk about soldiers, firefighters and fictional characters with supernatural powers as heroes. 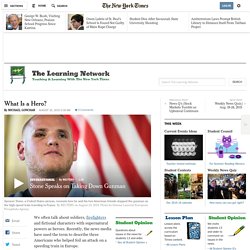 Recently, the news media have used the term to describe three Americans who helped foil an attack on a speeding train in Europe. $2,000 No Essay Scholarship - Niche. The Obsessively Detailed Map of American Literature's Most Epic Road Trips. The above map is the result of a painstaking and admittedly quixotic effort to catalog the country as it has been described in the American road-tripping literature. 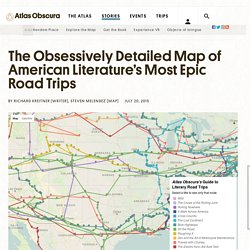 Study Skills for middle school students :iStudyforSuccess, LLC. 7 anti-plagiarism services for stopping cheaters. The Internet may provide students with readier access to pre-written papers than their parents' generation had, but online tools also make it easier for instructors to catch them in the act. 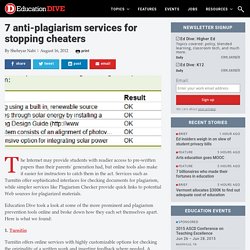 Services such as Turnitin offer sophisticated interfaces for checking documents for plagiarism, while simpler services like Plagiarism Checker provide quick links to potential Web sources for plagiarized materials. Education Dive took a look at some of the more prominent and plagiarism prevention tools online and broke down how they each set themselves apart. Here is what we found: 1. Turnitin Turnitin offers online services with highly customizable options for checking the originality of a written work and inserting feedback where needed. 2. 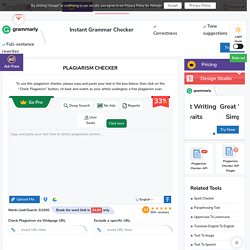 Billions of web pages This tool has the ability to check plagiarism by matching your content against billions of webpages on the Internet. Once you upload your content, it will automatically run it against every existing content on the web within seconds, making it the most sophisticated yet fastest plagiarism scanner you'll ever come across in your lifetime. 2. Plagiarism Checker - Free Online Software For Plagiarism Detection. Plagiarism.org - Best Practices for Ensuring Originality in Written Work.