Myths and Legends. Welcome: Myths and Legends Description: Using The Alchemist by Paulo Coelho as a primary text, students will come to define what myths and legends are. 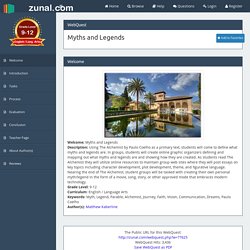 In groups, students will create online graphic organizers defining and mapping out what myths and legends are and showing how they are created. As students read The Alchemist they will utilize online resources to maintain group web sites where they will post essays on key topics including character development, plot development, theme, and figurative language. Nearing the end of The Alchemist, student groups will be tasked with creating their own personal myth/legend in the form of a movie, song, story, or other approved mode that embraces modern technology. 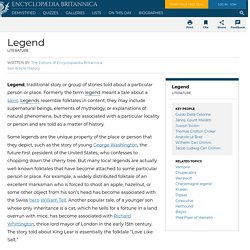 Formerly the term legend meant a tale about a saint. Legends resemble folktales in content; they may include supernatural beings, elements of mythology, or explanations of natural phenomena, but they are associated with a particular locality or person and are told as a matter of history. Some legends are the unique property of the place or person that they depict, such as the story of young George Washington, the future first president of the United States, who confesses to chopping down the cherry tree. But many local legends are actually well-known folktales that have become attached to some particular person or place. For example, a widely distributed folktale of an excellent marksman who is forced to shoot an apple, hazelnut, or some other object from his son’s head has become associated with the Swiss hero William Tell. Local legends sometimes travel. Timeless Myths: Arthurian Legends.

No kings had endured such everlasting fame. 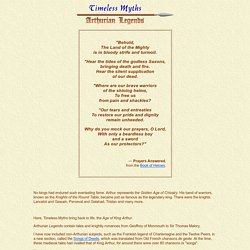 Arthur represents the Golden Age of Chivalry. The Historical Arthur. King Arthur is the figure at the heart of the Arthurian legends. 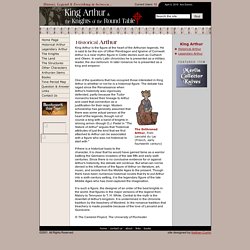 He is said to be the son of Uther Pendragon and Igraine of Cornwall. Arthur is a near mythic figure in Celtic stories such as Culhwch and Olwen. In early Latin chronicles he is presented as a military leader, the dux bellorum. In later romance he is presented as a king and emperor. One of the questions that has occupied those interested in King Arthur is whether or not he is a historical figure. Robbins Library Digital Projects. Agravaine is the son of Lot and Morgause and the brother of Gawain.

In the Vulgate Lancelot, Agravaine is said to be arrogant and jealous and ready to speak evil words. Although he shows no pity or love, he is a bold knight. King Arthur Legend: Fact and Fiction: A King Arthur WebQuest. Enter only if ye be scholars of valor...ye be warned! 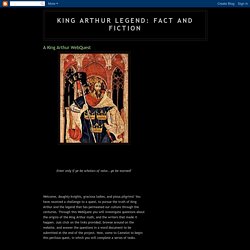 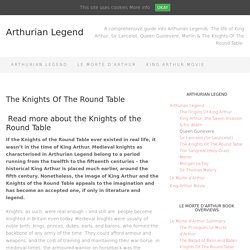 Medieval knights as characterised in Arthurian Legend belong to a period running from the twelfth to the fifteenth centuries – the historical King Arthur is placed much earlier, around the fifth century. Nonetheless, the image of King Arthur and the Knights of the Round Table appeals to the imagination and has become an accepted one, if only in literature and legend. Knights, as such, were real enough – and still are: people become knighted in Britain even today.

Medieval Life and Times. Medieval Chronicles brings you a detailed account of medieval history, the Life and Times of Medieval people and their roles in Medieval society. 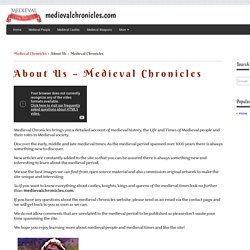 Discover the early, middle and late medieval times. As the medieval period spanned over 1000 years there is always something new to discover. New articles are constantly added to the site so that you can be assured there is always something new and interesting to learn about the medieval period. We use the best images we can find from open source material and also commission original artwork to make the site unique and interesting. So if you want to know everything about castles, knights, kings and queens of the medieval times look no further than medievalchronicles.com If you have any questions about the medieval chronicles website, please send us an email via the contact page and we will get back to you as soon as we can. Family Crest & Coat of Arms Template Maker / Generator. Why not see what your family crest could look like based on your own family characteristics? 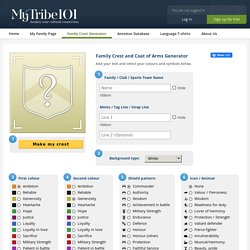 Enter your family name & motto. (Don't have a motto? Be creative!) Select a background for your crest. Choose your crest's first colour/attribute based on the family characteristics offered. Coat of arms history Traditional family crests stemmed from heraldic arms, also known as coat of arms or armorial bearings. Historically heraldic arms were a design belonging to a particular person or group of people. In times past your own family ancestors would have approached a heraldic artist or officer of arms to design your family crest.

Have you done something cool with your crest? Send us your photos of how you used your newly purchased family crest and enter a prize draw for a $30 Amazon voucher. info@mytribe101.com. Knight name generator. Arthurian legend documentary.