The source for Linux information. 2015 was a very important year for Linux, both in the enterprise as well as in the consumer space. 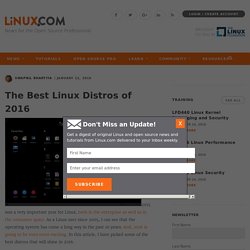 As a Linux user since 2005, I can see that the operating system has come a long way in the past 10 years. And, 2016 is going to be even more exciting. In this article, I have picked some of the best distros that will shine in 2016. Best Comeback Distro: openSUSE SUSE, the company behind openSUSE, is the oldest Linux company; it was formed just a year after Linus Torvalds announced Linux. In 2015, openSUSE teams decided to come closer to SUSE Linux Enterprise (SLE) so that users could have a distribution that shares its DNA with the enterprise server -- similar to CentOS and Ubuntu.

The two distros will share the code base to benefit each other -- SUSE will take what’s good in openSUSE and vice versa.

The deep, dark side of web! How people are getting drugs, guns delivered at doorstep. BENGALURU: Buying a gun has never been easier. 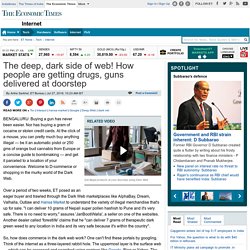 Nor has buying a gram of cocaine or stolen credit cards. At the click of a mouse, you can pretty much buy anything illegal — be it an automatic pistol or 250 gms of orange bud cannabis from Europe or a concise guide to bombmaking — and get it parceled to a location of your convenience. Welcome to D-commerce or shopping in the murky world of the Dark Web. Over a period of two weeks, ET posed as an eager buyer and trawled through the Dark Web marketplaces like AlphaBay, Dream, Valhalla, Outlaw and Hansa Market to understand the variety of illegal merchandise that's up for sale. "I can deliver 10 grams of Nepali super pollen hashish to Pune and it's very safe. So, how does commerce in the dark web work? One layer below is the Deep Web: anything that standard search engines can't find which include websites that are legal but not entirely searchable like some government websites.

OS-Uninstaller. OS-Uninstaller is a small graphical tool to perform a clean and quick uninstall of any operating system (Windows, MacOS, Ubuntu, other Linux distribution..) of your computer. 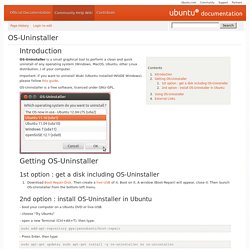 Important: if you want to uninstall Wubi (Ubuntu installed INSIDE Windows), please follow this guide. OS-Uninstaller is a free software, licenced under GNU-GPL. 1st option : get a disk including OS-Uninstaller Download Boot-Repair-Disk. Then create a live-USB of it. 2nd option : install OS-Uninstaller in Ubuntu. How to Crack a Wi-Fi Network's WPA Password with Reaver. How to Hack Your Own Network and Beef Up Its Security with Kali Linux. Linux Security Distros Compared: Tails vs. Kali vs. Qubes. Tails - the OS used by Edward Snowden - review - BestVPN.com. Tails bills itself as ‘the amnesiac incognito live system’, but it is really a stand-alone version (distro) of Linux (Debian GNU/Linux) that has been optimised for maximum security. 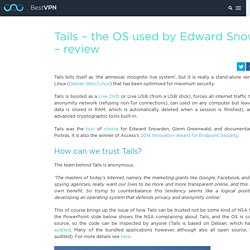 Tails is booted as a Live DVD or Live USB (from a USB stick), forces all internet traffic through the Tor anonymity network (refusing non-Tor connections), can used on any computer but leaves no trace (all data is stored in RAM, which is automatically deleted when a session is finished), and comes with advanced cryptographic tools built-in. Tails was the tool of choice for Edward Snowden, Glenn Greenwald, and documentary maker Laura Poitras. It is also the winner of Access’s 2014 Innovation Award for Endpoint Security. Fedora, Mint, openSUSE, Ubuntu: Which Linux desktop is for you? There are more interesting Linux desktop distributions to choose from than ever before. 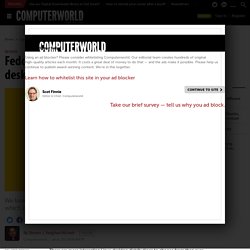 However, if you're looking for major distros with a great deal of support, you'll want to look at the big four: Fedora, Mint, openSUSE, and Ubuntu. Each has its own outlook and methods. Thanks to Linux's customizability, you could take any of them and completely revamp it, if you wish. But unless your idea of a good time is operating system hacking, chances are you'll want a distribution that already meets your needs. Microsoft's decision to unveil a subscription licensing model for Windows 10 for enterprises could be a Read Now Three of the four -- Fedora, Mint, and Ubuntu -- use GNOME as their default desktop interface, although they use it in very different ways. Both GNOME and KDE have moved away from their early days when their interfaces resembled that of Windows XP. There are many ways to try to deliver this integration of the local and Internet resources. How I tested. Ubuntu? Fedora? Mint? Debian? We'll find you the right Linux to swallow.

Distro guide Linux, it is said, is all about choice. 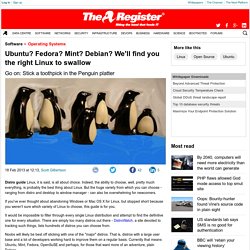 Indeed, the ability to choose, well, pretty much everything, is probably the best thing about Linux. But the huge variety from which you can choose - ranging from distro and desktop to window manager - can also be overwhelming for newcomers. If you've ever thought about abandoning Windows or Mac OS X for Linux, but stopped short because you weren't sure which variety of Linux to choose, this guide is for you. It would be impossible to filter through every single Linux distribution and attempt to find the definitive one for every situation.

Linux distributions built for security and anonymity - BestVPN.com. If privacy and security are important to you, then you really should ditch Windows and OSX, as not only are they both closed systems (so who knows what malicious code is hidden away out of sight?) 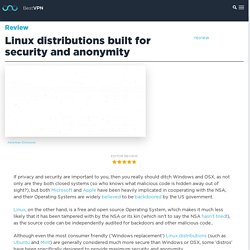 , but both Microsoft and Apple have been heavily implicated in cooperating with the NSA, and their Operating Systems are widely believed to be backdoored by the US government. Linux, on the other hand, is a free and open source Operating System, which makes it much less likely that it has been tampered with by the NSA or its kin (which isn’t to say the NSA hasn’t tried!)

, as the source code can be independently audited for backdoors and other malicious code.. Although even the most consumer friendly (‘Windows replacement’) Linux distributions (such as Ubuntu and Mint) are generally considered much more secure than Windows or OSX, some ‘distros’ have been specifically designed to provide maximum security and anonymity. Secure Linux distros TAILS: The Amnesiac Incognito Live System Pros Cons IprediaOS.