Hijacker: The WiFi Hacking Suite for Android. When you run Hijacker for the first time, you will be asked whether you want to install the nexmon firmware or go to home screen. 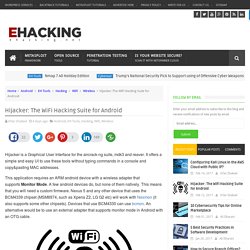 If you have installed your firmware, you can just go to the home screen. Otherwise, click'Install Nexmon' and follow the directions. Keep in mind that on some devices, installing files in /system might trigger an Android security feature and your system partition will be restored when you reboot. After installing the firmware you will land on the home screen and airodump will start. Aircrack-ng. Will Hack For SUSHI. Implementation of an offline dictionary attack against WPA/WPA2 networks using PSK-based authentication (e.g. 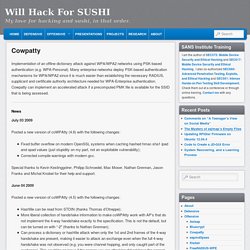 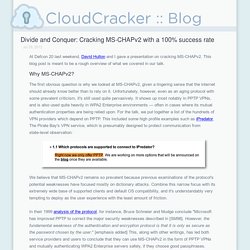 This blog post is meant to be a rough overview of what we covered in our talk. Why MS-CHAPv2? The first obvious question is why we looked at MS-CHAPv2, given a lingering sense that the internet should already know better than to rely on it. Unfortunately, however, even as an aging protocol with some prevalent criticism, it's still used quite pervasively. We believe that MS-CHAPv2 remains so prevalent because previous examinations of the protocol's potential weaknesses have focused mostly on dictionary attacks.

In their 1999 analysis of the protocol, for instance, Bruce Schneier and Mudge conclude "Microsoft has improved PPTP to correct the major security weaknesses described in [SM98]. The Protocol. WiFi Pineapple Mark V Standard – HakShop. The WiFi Pineapple is a unique device developed by Hak5 for the purpose of WiFi auditing and penetration testing. 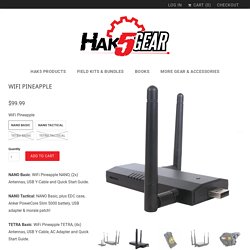 Since 2008 the WiFi Pineapple has grown to encompass the best rogue access point features, unique purpose-built hardware, intuitive web interfaces, versatile deployment options, powerful software and hardware development aids, a modular application ecosystem and a growing community of passionate penetration testers. Robust The WiFi Pineapple is the only hardware with dual integrated radios custom built for advanced wireless attacks. The Mark V generation is based on the formidable Atheros AR9331 system on a chip (SoC), which includes a 400 MHz MIPS processor, 16 MB ROM and 64 MB RAM. Onboard is the infamous Realtek RTL8187 radio with monitor and injection capabilities, a Micro SD memory expansion port, a bank of configurable auto-attack mode switches, a USB 2.0 host port and 10/100 Ethernet port.

Simple Intelligent Integrated Effective. BackTrack Linux - Penetration Testing Distribution. Wirelessdefense.org. Wireless Penetration. Community SANS. Despite the security concerns many of us share regarding wireless technology, it is here to stay. 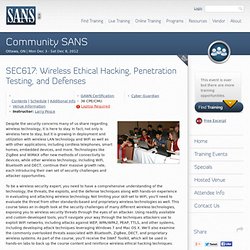 In fact, not only is wireless here to stay, but it is growing in deployment and utilization with wireless LAN technology and WiFi as well as with other applications, including cordless telephones, smart homes, embedded devices, and more. Technologies like ZigBee and WiMAX offer new methods of connectivity to devices, while other wireless technology, including WiFi, Bluetooth and DECT, continue their massive growth rate, each introducing their own set of security challenges and attacker opportunities. To be a wireless security expert, you need to have a comprehensive understanding of the technology, the threats, the exploits, and the defense techniques along with hands-on experience in evaluating and attacking wireless technology. WPA2 PSK (WPS weakness) Decrypt WPA2-PSK using Wireshark.

In this post we will see how to decrypt WPA2-PSK traffic using wireshark. 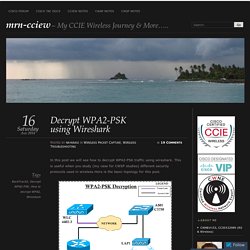 This is useful when you study (my case for CWSP studies) different security protocols used in wireless.Here is the basic topology for this post. Before start capturing you should know which channel your AP is operating. Cracking WPA WPA2 with Kali Linux (verbal step by step guide) How to Crack WPA2 WPS WiFi password. Wifi Protected Setup or WPS is a 802.11 certified standard for delivering security over your Wireless network. 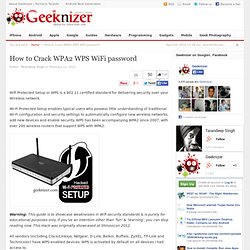 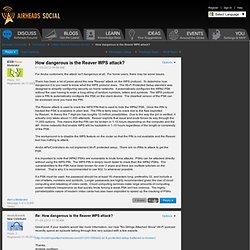 For home users, there may be some issues. There has been a lot of press about the new 'Reaver' attack on the WPS protocol. To determine how dangerous it is you need to know what the WPS protocol does. The Wi-Fi Protected Setup standard was designed to simplify configuring security on home networks. BYOD, Cloud Intensify Known Wi-Fi Authentication Risk - TechNotes. Two industry trends might be magnifying a known Wi-Fi risk associated with Microsoft's widely used MS-CHAPv2 authentication protocol. 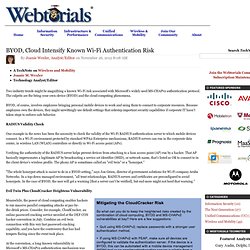 The culprits are the bring-your-own-device (BYOD) and the cloud computing phenomena. BYOD, of course, involves employees bringing personal mobile devices to work and using them to connect to corporate resources. Because employees own the devices, they might unwittingly use default settings that sidestep important security capabilities if corporate IT hasn't taken steps to enforce safe behavior. RADIUS Validity Check One example in the news has been the necessity to check the validity of the Wi-Fi RADIUS authentication server to which mobile devices connect.

Verifying the authenticity of the RADIUS server helps prevent devices from attaching to a faux access point (AP) run by a hacker. "The whole honeypot attack is easier to do in a BYOD setting," says Jon Green, director of government solutions for Wi-Fi company Aruba Networks. Cracking WEP with Kali Linux tutorial (Verbal step by step)