Why You Should Read China’s Favorite Sci-Fi Epic. There was a moment recently when the internet, parsing a report from scientists at the Search for Extraterrestrial Intelligence Institute, thought we might have received our first interstellar transmission. 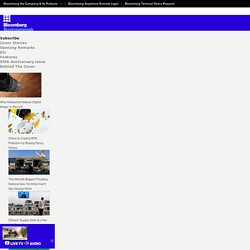 The hyperventilating headlines gave way a few hours later to cold-water explainers about why it probably wasn’t the work of aliens—or a wrong number. But let’s say it was a real message from 94 light-years away: Should we call back? Anyone who’s read China’s most popular science fiction series, The Three-Body Trilogy, in which author Cixin Liu follows into the far future the consequences of a Chinese scientist who replied to such a signal, would keep silent forever. The first translated volume, The Three-Body Problem, reached the U.S. in 2014 and wound up on the reading lists of President Obama and Facebook founder Mark Zuckerberg—two people who’ve spent a bit of time contemplating what’s to come. Translators are working to bring American readers up to speed. Uk.businessinsider. A pie at Tony's Pizza Napoletana.Allister D. / Yelp There's no shortage of amazing restaurants in San Francisco. 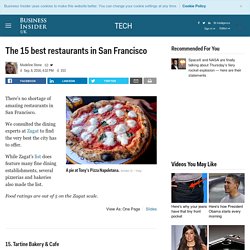 We consulted the dining experts at Zagat to find the very best the city has to offer. While Zagat's list does feature many fine dining establishments, several pizzerias and bakeries also made the list. Food ratings are out of 5 on the Zagat scale. 15. 600 Guerrero Street Food: 4.7 This Mission bakery is "in a class by itself," with morning buns, quiche, and banana cream tarts that are to die for. Lines are long and prices are high, but loyal fans say the baked goods are worth the effort. 14.

Dean C. / Yelp 1529 Fillmore Street Food: 4.7 Husband-and-wife team Stuart Brioza and Nicole Krasinski have created a "cutting-edge" restaurant with a "vibe as exciting as the food," Zagat diners rave. If you can get a reservation, the quail (or "state bird," as it's labeled on the menu) is a must-try. NFL's most and least expensive stadiums - Sep. 7, 2016. The cost of attendance varies greatly. 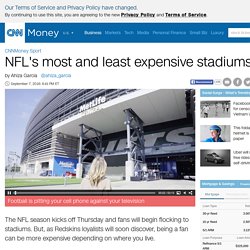 A survey of the most and least expensive stadiums looked at the cost of two people attending a game -- two tickets, two hot dogs, two beers, two soft drinks and parking. The info on concessions and parking comes from Team Marketing Report. The ticket prices were calculated by GoBankingRates.com, which averaged the three cheapest season ticket prices for each team. The price difference is often in the details. The data shows that fans can get two Buffalo Bills tickets for $72.66. At a Seattle Seahawks game, visitors can get two hot dogs ($6) for half of what they cost at a Detroit Lions game ($12.50).

Beer prices are about the same at Oakland Raiders ($10.75) and San Francisco 49ers ($10) games, but the cost of a ticket is very different. Related: Atlanta Falcons' new stadium will offer $2 hot dogs and $5 beer Here are the least and most expensive games to attend: Least expensive. How to Crack a Wi-Fi Network's WPA Password with Reaver. For a Classic, All-American Summer Vacation, Try This Great Lake Getaway. Those of us born and raised in the U.S. coastal states, myself included, suffer to varying degrees from a geographic myopia, one that blurs tremendous swaths of our nation into an indistinct mass called “flyover country.” 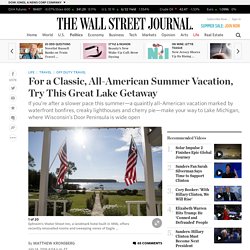 We pay for this shortsightedness when planning summer getaways, often setting our sights on the same overcrowded, overpriced saltwater spots—and bypassing our enviable inland seas, the Great Lakes. When the last fragment of my own oceanic bias fell away, I was quite literally at Death’s Door—as the beautiful, treacherous strait that connects Green Bay with Lake Michigan is known. I was on a ferry in Door County, Wis., crossing from bucolic Washington Island to the Door Peninsula, a roughly 70-mile-long finger of land that stretches out from the mainland, set prettily between the bay and the lake.

Days are for adventure. There are lighthouses to explore and shipwrecks to find (it’s not called Death’s Door for nothing).