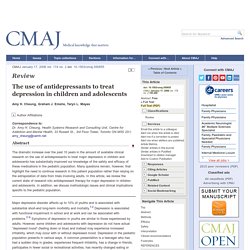 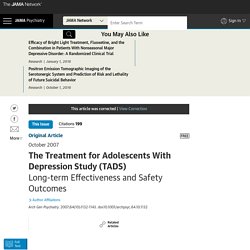 Objective To report effectiveness outcomes across 36 weeks of randomized treatment. Design and Setting Randomized, controlled trial conducted in 13 academic and community sites in the United States. Cognitive behavior and combination therapies were not masked, whereas administration of placebo and fluoxetine was double-blind through 12 weeks, after which treatments were unblinded. Patients assigned to placebo were treated openly after week 12, and the placebo group is not included in these analyses by design. Participants Three hundred twenty-seven patients aged 12 to 17 years with a primary DSM-IV diagnosis of major depressive disorder. NIMH » Antidepressant Medications for Children and Adolescents: Information for Parents and Caregivers. Depression is a serious disorder that can cause significant problems in mood, thinking, and behavior at home, in school, and with peers. 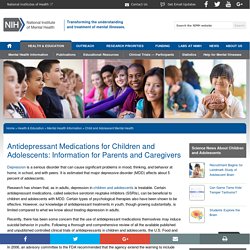 It is estimated that major depressive disorder (MDD) affects about 5 percent of adolescents. Research has shown that, as in adults, depression in children and adolescents is treatable. Certain antidepressant medications, called selective serotonin reuptake inhibitors (SSRIs), can be beneficial to children and adolescents with MDD. Certain types of psychological therapies also have been shown to be effective.