Can You Meditate Through Art? When was the last time you enjoyed what you were doing so much that you lost track of time? 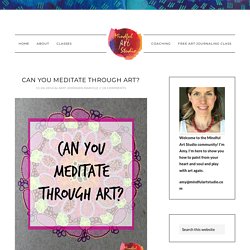 Can you think of a time when you were having coffee with a friend, reading, praying, beach combing, or making art, you got so immersed that you suddenly realized two hours had gone by without you realizing? This experience is something researchers refer to as “flow,” and it turns out it’s really important for your mental and emotional health. It also turns out that it’s particularly common during art making. (You can read more about why we experience flow in art here.) When Do You Experience “Flow?” When I get into a state of flow through art, I feel like I am a “medium.” I really feel like I am not in control of the art that is coming from me. Sometimes it does look horrible, but often it doesn’t . You can meditate through art. Letting Go of Control My favorite author, Isabel Allende, talks about not planning out her novels. She follows her characters’ wishes instead of dictating their lives. DWD PrintVersion.

Parent Resources. Two Psychiatrists Share Advice About How To Talk To Someone Who Seems At Risk For Suicide : Goats and Soda. An abandoned house appears over a snow-covered hill in the old town of Kangeq, Greenland. 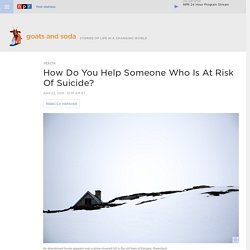 John W. Poole/NPR hide caption toggle caption John W. Poole/NPR An abandoned house appears over a snow-covered hill in the old town of Kangeq, Greenland. John W. How do you help someone who is at risk of suicide? That's a question that haunts the people of Greenland, the country with the highest known rate of suicide in the world and the subject of a special NPR report this week. But it's a question that anyone, anywhere, might ask. MORE ON GREENLAND: This story is part of our special report on Greenland, whose suicide rate is among the highest in the world. A new report from the Centers for Disease Control and Prevention shows that suicide has been steadily increasing in the U.S. since 1999.

But for every person who dies by suicide, there are many, many more who struggle with suicidal thoughts. NPR talked with Harkavy-Friedman and Dr. Dr. Toggle caption University of Manitoba. NAMI: National Alliance on Mental Illness. Bipolar disorder is a mental illness that causes dramatic shifts in a person’s mood, energy and ability to think clearly. 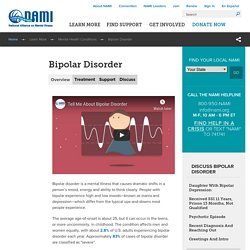 People with bipolar experience high and low moods—known as mania and depression—which differ from the typical ups-and-downs most people experience. The average age-of-onset is about 25, but it can occur in the teens, or more uncommonly, in childhood. The condition affects men and women equally, with about 2.8% of U.S. adults experiencing bipolar disorder each year. Approximately 83% of cases of bipolar disorder are classified as "severe". If left untreated, bipolar disorder usually worsens. Bipolar Disorder. Bipolar Disorder, and other mental disorders, should only be diagnosed by a medical doctor, clinical psychologist, or other trained health provider who has spent time with the teenager and has conducted a proper mental health assessment. 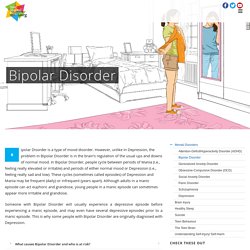 Hypomanic Episodes These are similar to manic episodes and last for four consecutive days or longer, but don’t significantly interfere with the person’s ability to live his or her life. Cutting. Listen How Does Cutting Start? 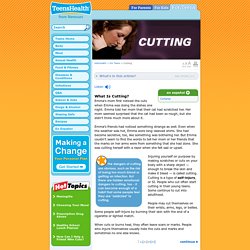 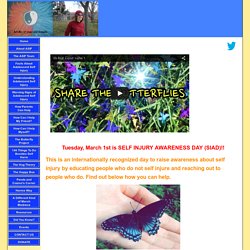 This is an internationally recognized day to raise awareness about self injury by educating people who do not self injure and reaching out to people who do. Find out below how you can help. Join the Adolescent Self Injury Foundation in supporting Self Injury Awareness Day on March 1, 2016. Here is what you can do to start the dialogue about self injury: Post a butterfly on your facebook wall with a link to www.adolescentselfinjuryfoundation.com Discuss self injury on Twitter #ASIFstopcutting Write LOVE on your arms, wear some orange clothing Draw a butterfly, or place temporary tattoo of a butterfly on your hand, arm, or wrist Contact your local radio station to ask listeners to participate.