Rapid Prototyping: Tips for Running an Effective R&D Process. So you realize that it's important to prototype your ideas before launching into production -- but how do you do it? 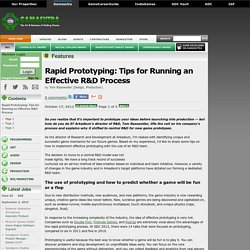 Arkadium's director of R&D, Tom Rassweiler, lifts the veil on his company's process and explains why it shifted to central R&D for new game prototypes. As the director of Research and Development at Arkadium, I'm tasked with identifying unique and successful game mechanics for our future games. Based on my experience, I'd like to share some tips on how to implement effective prototyping with the use of an R&D team. The decision to move to a central R&D model was not made lightly. We have a long track record of successes nurtured via an ad-hoc method of idea-creation based on individual and team initiative. Due to new distribution methods, new audiences, and new platforms, the game industry is now rewarding unique, creative game ideas like never before. In response to the increasing complexity of the industry, the idea of effective prototyping is very hot. Herman Tulleken's Blog - Rapid Game Prototyping: Tips for Programmers. The following blog post, unless otherwise noted, was written by a member of Gamasutra’s community. 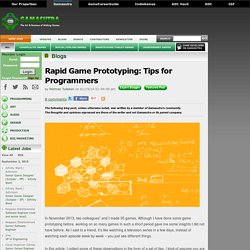 The thoughts and opinions expressed are those of the writer and not Gamasutra or its parent company. In November 2013, two colleagues* and I made 30 games. Although I have done some game prototyping before, working on so many games in such a short period gave me some insights I did not have before. As I said to a friend, it’s like watching a television series in a few days, instead of watching each episode week by week – you just see different things. In this article, I collect some of these observations in the form of a set of tips. (*Their names are Jonathan Bailey and Eduard Beukes. A. Making something very quickly is a lot of fun.

Building a rapid-prototype gives you immediate satisfaction. But you need to get out of development mode, and out of tinkering mode. Quick and Dirty Prototyping: A Success Story. Last November at the IGDA Leadership Forum, I gave a short talk on quick and dirty prototyping as a production method for small PC games. 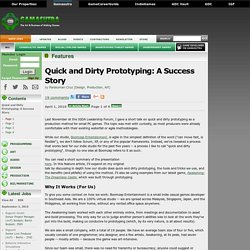 The topic was met with curiosity, as most producers were already comfortable with their existing waterfall or agile methodologies. While our studio, Boomzap Entertainment, is agile in the simplest definition of the word ("can move fast, is flexible"), we don't follow Scrum, XP, or any of the popular frameworks. Instead, we've tweaked a process that works best for our indie studio for the past five years -- a process I like to call "quick and dirty prototyping", though no one else at Boomzap refers to it as such. You can read a short summary of the presentation here. In this feature article, I'll expand on my original talk by discussing in depth how our studio does quick and dirty prototyping, the tools and tricks we use, and the benefits (and pitfalls) of using the method.

We are also a small company, with a total of 19 people. 1. 2. 3. Prototyping: You’re (Probably) Doing It Wrong. You’re not alone, I was also doing prototyping wrong until a few years ago. 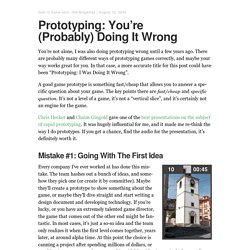 There are probably many different ways of prototyping games correctly, and maybe your way works great for you. In that case, a more accurate title for this post could have been “Prototyping: I Was Doing It Wrong”. A good game prototype is something fast/cheap that allows you to answer a specific question about your game. The key points there are fast/cheap and specific question. Advanced Prototyping. Wireframes are dead, long live rapid prototyping.

Wireframes, your time is up. 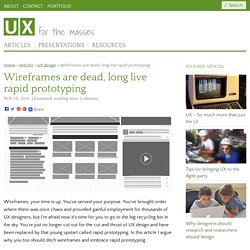 You’ve served your purpose. You’ve brought order where there was once chaos and provided gainful employment for thousands of UX designers, but I’m afraid now it’s time for you to go to the big recycling bin in the sky. You’re just no longer cut out for the cut and thrust of UX design and have been replaced by that young upstart called rapid prototyping. In this article I argue why you too should ditch wireframes and embrace rapid prototyping.

What are wireframes? In the same way that architectural drawings might outline what goes where for buildings, wireframes outline what goes where for a set of UI screens. An example wireframe with footnotes Wireframes are usually put together by a UX designer (or designers) prior to any visual design work and are typically constructed using diagramming tools such as Visio and Omnigraffle, or design and drawing tools such as InDesign and Fireworks. Why ditch wireframes? So what’s so wrong with wireframes?