Break the Silence, End the Stigma - Wear Your Label. This fall, we decided to do things a little differently: instead of producing a new collection alone, we joined forces with a number of mental health organizations in Canada & the US to roll out a Collab Collection. 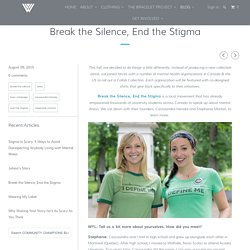 Each organization will be featured with co-designed shirts that give back specifically to their initiatives. Break the Silence, End the Stigma is a local movement that has already empowered thousands of university students across Canada to speak up about mental illness. Fashion journalist launches site to highlight mental health problems in young people.

A GRADUATE who has launched an online youth magazine to raise awareness of mental health issues in the fashion industry has been overwhelmed by the positive response. 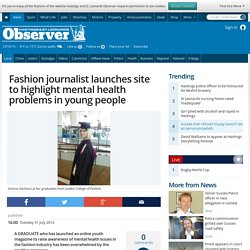 What is the Problem with Fashion Today? It’s time we got answers on why the mental health system is failing a generation. As anyone who has tried to access mental health services will know, our country is facing a crisis. 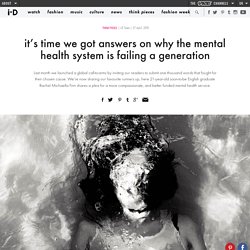 According to The Guardian, there was a period of a few weeks in late 2013 where there were no inpatient beds, either in the private or public sector, in mental health units in the entirety of England. Let's think about that for a moment. For every person who attempted suicide and survived in late 2013, for everyone suffering from psychosis, mood disorders, eating disorders or any of the other wide range of common illnesses, there was nowhere for them to receive inpatient hospital care for a period of not days but weeks, just over a year ago.

My interest in mental health problems is not solely based on statistics, but it's also a personal one. I was first diagnosed with depression over four years ago and in that time, I've had two major episodes and attempted to take my own life as many times. Because the sad truth is that mental illness kills. Credits Text Rachel Michaella Finn. The effect of fashion images on mental health. The fashion industry has always been in the firing line when it comes to pin pointing the root of an eating disorder. 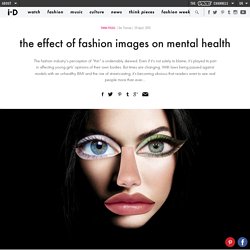 While it is negligent and short sighted to solely blame one single factor on an incredibly complicated disease, it is imperative that the industry does acknowledge that an image is very powerful and its content has an effect on both the viewing public and the models starring in it. Young people are bombarded daily with images that fuel negative body image and self-loathing. It happens in advertising, film and music; which all have a responsibility as well, as does the fashion industry, to become more conscious of the negative impact they are having on young people. Fashion is about fantasy and aspiration, and so it should be. A great fashion image is a very powerful and beautiful thing.

It is undeniable that models are under pressure to, literally, fit the mould of the fashion industry's standard of beauty. Credits Text Ger Tierney Image Kristina Britton. Anxiety, Stress, Herbs, Teas, Food for Anxiety, Social Disorders, Phobias at Peacefulmind.com. The following maladies are all situations that can be helped with Aromatherapy, Herbal Medicine, Acupuncture, Exercise, Nutrition and Lifestyle Changes, Crystals and/or Homeopathy. 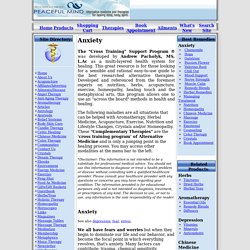 These "Complementary Therapies" are the 'cross training program' of Alternative Medicine and is only a jumping point in the healing process. You may access other modalities at the menu bar to the left. *Disclaimer: This information is not intended to be a substitute for professional medical advice. You should not use this information to diagnose or treat a health problem or disease without consulting with a qualified healthcare provider.

Please consult your healthcare provider with any questions or concerns you may have regarding your condition. Anxiety See also depression, fear, stress. We all have fears and worries but when they begin to dominate our life and our behavior, and become the focal point in which everything revolves, that's anxiety. Anxiety disorders are ubiquitous across human cultures. How edinburgh fringe is tackling mental health through comedy. At the best of times Edinburgh Fringe Festival can be alienating, difficult and mentally exhausting. 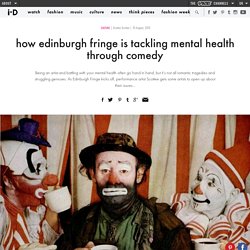 Artists share beds with their peers and spend their days being rejected whilst flyering on the Royal Mile. They glance two star reviews from journalists who "didn't get it" before stepping out on stage attempting to make the average Fringe audience clap - surviving the Fringe is a marathon for the mind and soul. Every year a common theme emerges - last year saw a fair few Thatcher inspired shows, the year before saw feminism wonderfully re-engage with its radicalism. This year a wealth of brilliant artists have taken the plunge and opted to share their mental health issues -- but is the fringe the right environment to share such fragility? It's no secret that many artists suffer with their mental health, including myself, so why shouldn't we shout about it? For many years the Fringe has largely been a comedy festival and some artists are using this to their advantage.

@scotteeisfat. Opinion: What place does mental health have in fashion? Thirty minutes listening to the tinkly chiming of an antique music box, as a solo light bulb in the centre of the room surged and dimmed, brought Thom Browne's audience to the brink. 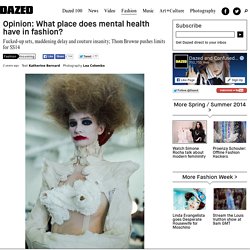 The room was padded and tiled and clearly set for clinical theatrics, so was this mind-fuck delay intentional? Mental health in fashion: it’s time to talk. Last week, the CFDA announced that New York would join London, Paris and Milan in getting its own men’s fashion week. 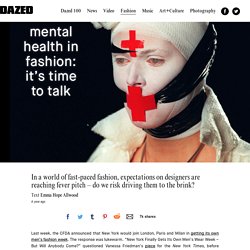 The response was lukewarm. “New York Finally Gets Its Own Men’s Wear Week – But Will Anybody Come?” Questioned Vanessa Friedman’s piece for the New York Times, before pointing out that this addition to the calendar would mean almost non-stop fashion shows from January to March, a month of which kick off the AW15 womenswear season today. Fashion and mental health: the one trend nobody mentions. Isabella Blow, Alexander McQueen, Ruslana Korshunova and now L’Wren Scott: all people working in the fashion industry who, as far as we know, committed suicide. 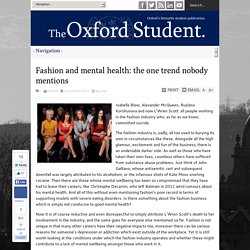 The fashion industry is, sadly, all too used to burying its own in circumstances like these. Alongside all the high glamour, excitement and fun of the business, there is an undeniable darker side. As well as those who have taken their own lives, countless others have suffered from substance abuse problems. Just think of John Galliano, whose antisemitic rant and subsequent downfall was largely attributed to his alcoholism, or the infamous shots of Kate Moss snorting cocaine.