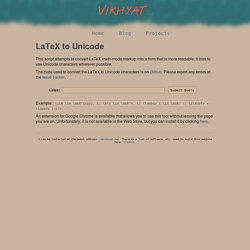 It tries to use Unicode characters wherever possible. The code used to convert the LaTeX to Unicode characters is on Github. Please report any errors at the Issue tracker. Example: \itA \in \bbR^{nxn}, \; \bfv \in \bbR^n, \; \lambda_i \in \bbR: \; \itA\bfv = \lambda_i\bfv An extension for Google Chrome is available that allows you to use this tool without leaving the page you are on. I can be contacted at the email address: c@vikhyat.net .

LyX’s detailed Math manual. By the LyX Team Version 2.0.x This document explains LyX’s math features and is furthermore a collection of LaTeX-commands used for mathematical characters and constructs. 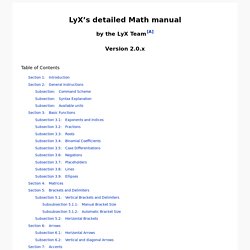 The explanations are designed for the usage of commands. It is therefore required that you have read the section Mathematical Formulas of the User’s Guide. Most of the characters and many constructs explained in this manual are also accessible via the menu Insert ▷ Math, or the math toolbar. If not specially mentioned the commands are only available within formulas. This document doesn’t list all AmS -math commands for lucidity reasons. To create an inline formula↓ that is embedded into a text line, use one of the shortcuts math-mode or the toolbar button To create a display style formula↓ that will appear bigger and in an own paragraph, use one of these shortcuts: math-display. To display parts of an inline formula in the size of a display style formula, enter the command \displaystyle↓ to a formula. TopITBooks - Top IT Books Free Download. Play board games online! Dear all, As you know, for two years and a half, we have been giving without counting to allow you to discover the best board games online.

Our goal when we started this website was to create the best board gaming website online. With 32 games online (and a lot more to come) and 500 to 600 players online every evening, BGA is not very far of getting to be the most popular website of its category, and we feel like we completed our mission. Since two years and a half, we have had to battle with our families, our friends, our jobs and our social life overall to find the time needed for this adventure.

We managed to do it thanks to our passion and our willingness to never stay put and to always go forward through innovation: the collaborative translation system, BGA Studio or the new lobby are the fruits from this state of mind. Fortunately, two old friends of ours have confirmed their interest to take back this website. LibGDX - It's Good For You! Programming Languages Weblog. Introduction to Goose Game. The first mention of the Game of the Goose comes from Francesco dei Medici, Grand Duke of Florence in Italy from 1574 to 1587. 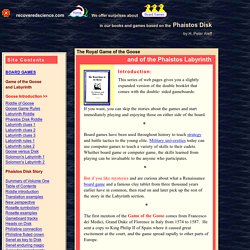 He sent a copy to King Philip II of Spain where it caused great excitement at the court, and the game spread rapidly to other parts of Europe. Professor Murray reports in his book: "A History of Board Games other than Chess" (Oxford University Press, 1952) that it reached England by 1597, when John Wolfe entered "the newe and most pleasant game of the Goose" in the Stationers' Register on June 16 (Arber, iii, 21).

In 1758 the Duchess of Norfolk planted a Game of Goose in hornbeam at Worksop, as mentioned by Horace Walpole (Letters, 1840, iii, 395). Such hedge designs were at the time popular among the European gentry, although instead of the Goose game's spiral most were laid out as living Labyrinths, like the famous maze at Hampton Court. Continue Advertisement: Encyclopedia of Philosophy. Martin's axiom. In the mathematical field of set theory, Martin's axiom, introduced by Donald A. 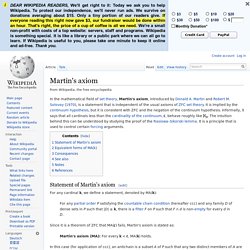 Martin and Robert M. Solovay (1970), is a statement that is independent of the usual axioms of ZFC set theory. It is implied by the continuum hypothesis, but it is consistent with ZFC and the negation of the continuum hypothesis. Informally, it says that all cardinals less than the cardinality of the continuum, , behave roughly like Statement of Martin's axiom[edit] For any cardinal k, we define a statement, denoted by MA(k): Since it is a theorem of ZFC that MA( ) fails, Martin's axiom is stated as: Martin's axiom (MA): For every k < , MA(k) holds. ) is simply true. ) is false: [0, 1] is a compact Hausdorff space, which is separable and so ccc.