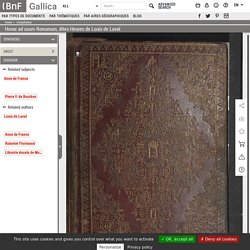 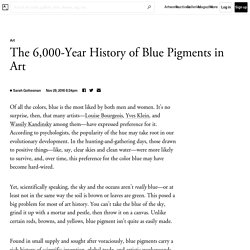 Roy G. Biv) have a clear outlier: indigo. Commonly considered a shade of blue, indigo is not a separate color in its own right, so why does it get its own band in the color spectrum? Indigo was a desired import throughout the 17th and 18th centuries, driving trade wars between European nations and the Americas, fueling the African slave trade, and even partially funding the American Revolutionary War. A natural dye rather than a pigment for painting, indigo was used to color fabrics, clothing, yarns, and luxurious tapestries. Art/Styles and movements - Monoskop. Style transfer. 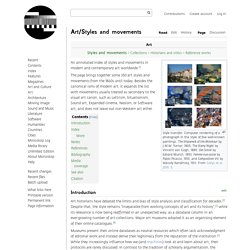 Computer rendering of a photograph in the style of five well-known paintings: The Shipwreck of the Minotaur by J.M.W. Turner, 1805; The Starry Night by Vincent van Gogh, 1889; Der Schrei by Edvard Munch, 1893; Femme nue assise by Pablo Picasso, 1910; and Composition VII by Wassily Kandinsky, 1913. From Gatys et al 2015: 5. An annotated index of styles and movements in modern and contemporary art worldwide.[1] The page brings together some 350 art styles and movements from the 1860s until today. Introduction[edit] Art historians have debated the limits and bias of style analysis and classification for decades.[2] Despite that, the style remains "inseparable from working concepts of art and its history",[3] while its relevance is now being reaffirmed in an unexpected way, as a database column in an ever-growing number of art collections.

David by Michelangelo: The History of the Renaissance Sculpture. Michelangelo's defiant David statue has captivated the world for centuries. Considered one of art history's major masterpieces, the marble sculpture showcases both the artist's skill and the fine art focus that defines the Renaissance. Since its debut in the early 16th century, artists and art connoisseurs alike have admired the piece. Esteemed artist, writer, and historian Giorgio Vasari noted that “no other artwork is equal to it in any respect, with such just proportion, beauty and excellence did Michelangelo finish it.” To understand why the sculpture has garnered such praise, one must first understand the context in which it was created.

Pablo Picasso's Gallery. Picasso Black and White. Scratch the Surface, Two Picassos Revealed - Interactive Feature. Examinations with different types of equipment – both X-rays and the newest customized infrared cameras – have produced a clearer image of the man underneath "Woman Ironing. 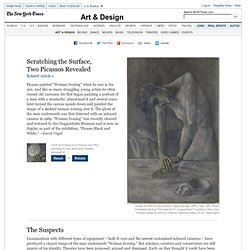 " But scholars, curators and conservators are still unsure of his identity. Theories have been proposed, argued and dismissed. Early on they thought it could have been Picasso’s friend, a Barcelona tailor. There are other theories that it is one of two fellow artists. There has even been a suggestion it was the beginning of a self-portrait. Album /Art Resource, NY Ricard Canals, Self-Portrait, Undated. This artist, slightly older than Picasso, was both a rival and a friend over the years. Estate of Pablo Picasso / Artists Rights Society (ARS), NY Mateu de Soto, by Picasso, 1901. Mateu Fernandez de Soto was sculptor. Estate of Pablo Picasso/Artists Rights Society (ARS), NY. 75 Years After Guernica. No community believes more in the power of art than the Spanish town of Guernica. 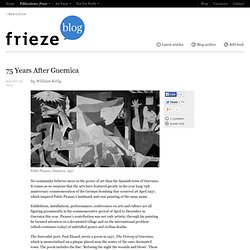 It comes as no surprise that the arts have featured greatly in the year long 75th anniversary commemoration of the German bombing that occurred 26 April 1937, which inspired Pablo Picasso’s landmark anti-war painting of the same name. Exhibitions, installations, performances, conferences on arts and culture are all figuring prominently in the commemorative period of April to December in Guernica this year. Picasso’s contribution was not only artistic; through his painting he focused attention on a devastated village and on the international problem (which continues today) of unbridled power and civilian deaths. A Walk Through the Gallery. Closing Soon The show will be open to the public 24 hours a day until 5:30 p.m. on Sunday, Feb. 8. 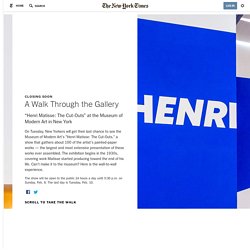