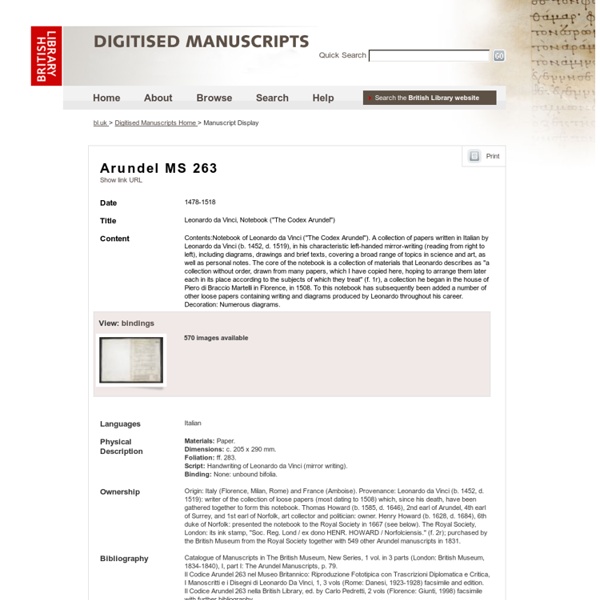 Leonardo da Vinci's Visionary Notebooks Now Online: Browse 570 Digitized Pages Quick, what do you know about Leonardo da Vinci? He painted the Mona Lisa! He wrote his notes backwards! He designed supercool bridges and flying machines! He was a genius about, um… a lot of other… things… and, um, stuff... Okay, I’m sure you know a bit more than that, but unless you’re a Renaissance scholar, you’re certain to find yourself amazed and surprised at how much you didn’t know about the quintessential Renaissance man when you encounter a compilation of his notebooks—Codex Arundel—which has been digitized by the British Library and made available to the public. Before Sister Wendy Beckett, Italian Renaissance Nuns Shaped Art History As they slowly emerge, artworks by nuns have been summarized by a derisive umbrella term: Nonnenarbeiten (German for “nuns’ works”). “We would never assign a Sacra conversatione [a type of devotional painting depicting the Virgin and Child] by Fra Angelico and a portrait by Fra Filippo Lippi to the same genre simply because both happen to have been painted by friars,” art historian Jeffrey F. Hamburger writes in his book Nuns as Artists (1997).

Japanese Illustrated Books from the Edo and Meiji Periods The Freer|Sackler Library's collection of illustrated Japanese rare books includes over 1,000 volumes previously owned by Charles Lang Freer. Often filled with color illustrations, many are by famous artists such as Andō Hiroshige and Katsushika Hokusai. These beautiful woodblock printed works of art were published during the Edo and Meiji periods (1600-1912). Another group of Japanese rare books more recently added to the Library's collections consists of 67 volumes of illustrated Meiji-period books collected by Robert O.

Understanding Donatello’s “David” as a Work of Gay Ary Were early Renaissance audiences similarly seduced by David? It’s not clear exactly how viewers responded to this work. In 1504, Francesco di Lorenzo Filarete, a poet and herald in the Florentine government, advised that Michelangelo’s new David might replace Donatello’s in the the Palazzo Vecchio, and the latter be moved elsewhere.

"Adoration of the Magi" by Botticelli – Joy of Museums The “Adoration of the Magi” by Sandro Botticelli is based on the traditional subject of the Nativity of Jesus in which the three Magi, who found Jesus by following a star and then laid gifts before him and worship him. This story is in the Bible by Matthew 2:11: “On entering the house, they saw the child with Mary, and they knelt and paid homage to him. Then, opening their treasure chests, they offered him gifts of gold, frankincense, and myrrh”.

The Geometry of an Art – Wenzel Jamnitzer Wenzel Jamnitzer (sometimes Jamitzer, or Wenzel Gemniczer) (1507/1508 – December 19, 1585) was a Northern Mannerist goldsmith, artist, and printmaker in etching, who worked in Nuremberg. He was the best known German goldsmith of his era, and court goldsmith to a succession of Holy Roman Emperors. A native of Vienna, Jamnitzer was a member of a Moravian German family which, for more than 160 years, had produced works under the names Jamnitzer, Jemniczer, Gemniczer, and Jamitzer. Wenzel, with his brother Albrecht, was trained by his father Hans the Elder. Jamnitzer worked as a court goldsmith for all the German emperors of his era, including Charles V, Ferdinand I, Maximilian II, and Rudolf II.

British Library posts 1 million copyright-free images online Elements of telegraphic style, 1928 Nelson E. Ross’s “small booklet” sets out the principles of sending telegrams “in the most economical manner possible,” so you can take full advantage of a communications medium that “annihilates distance and commands immediate attention.” Blumoo turns your mobile device into a universal remote and it's 47% off Why buy one of those expensive and confusing universal remotes, clogged with enough buttons to launch a space shuttle, when you could accomplish the same electronic control right on your favorite mobile device? The Blumoo Universal Remote, now just $52.99 in the Boing Boing Store, harnesses the audio power of all your household equipment right […]

Visual Cultures of Foundling Care in Renaissance Italy Diana Bullen Presciutti’s Visual Cultures of Foundling Care in Renaissance Italy is a sharply focused look at the figurative imagery deployed by hospitals caring for orphaned and abandoned children. Hospitals in Renaissance Italy have long been a subject of research: John Henderson’s The Renaissance Hospital: Healing the Body and Healing the Soul (2006) is a recent example of broad treatment, and Il mercante, l’ospedale, i fanciulli: La donazione di Francesco Datini, Santa Maria Nuova e la Fondazione degli Innocenti (eds. Stefano Filipponi, et al., 2010) is an example of specialized institutional studies. Historians have sought to chart the emergence of hospitals in the late medieval city and to understand their evolving social roles. Changing concepts of wealth and poverty, charity, childhood, and the proper role of municipal governments in the provision of care to the sick poor underlie these studies.

Yale Center for British Art Releases Thousands of Public Domain Images This exciting news, in conjunction with Public Domain Day, comes to us from Melissa Fournier, Manager of Imaging Services and Intellectual Property at the Yale Center for British Art. We are pleased to share news from the Yale Center for British Art about the recent release of more than 22,000 additional high-resolution digital images of works in the public domain to our online collection. This new release contains a treasure trove of images of over 1,700 prints after works byLowering the barriers between [our] digitized resources and their users is critical for the advancement of knowledge.J. afro-atlantic-histories-sao-paulo-museum-of-art-tomie-ohtake-institute SÃO PAULO, Brazil — It’s worth going a distance for greatness. And great is what the exhibition “Histórias Afro-Atlânticas” (“Afro-Atlantic Histories”) is. With 450 works by more than 200 artists spread over two museums, it’s a hemispheric treasure chest, a redrafting of known narratives, and piece for piece one of the most enthralling shows I’ve seen in years, with one visual detonation after another. Its timing, for better or worse, is apt. In national elections scheduled for late this month, a right-wing populist candidate, Jair Bolsonaro, has a strong chance of becoming Brazil’s next president.

Third Issue - The Journal of Ancient Egyptian Architecture Click on the abstracts below to read the online version or to download the PDF of the Journal of Ancient Egyptian Architecture articles. Please be aware that online versions may contain specific content unavailable on PDFs. Franck Monnier By focusing on archaeological data collected by Ernest Mackay in the early 20th century, this article proposes a revised reconstruction for the satellite pyramid of Meidum. This correction is followed by a discussion of who was responsible for constructing the main Meidum pyramid, and provides an opportunity to place all of the subsidiary pyramids within the giant tomb building program of Snefru, for the first time. The result is a comprehensive reassessment of the sequence of construction phases for the funerary sites of this king.

Behind the Fig Leaf—a Story of Sin, Censorship, and the Catholic Church The trend also transformed Masaccio’s 15th-century frescoes in Florence’s Brancacci Chapel. In the 1600s, an unknown artist painted fig leaves over its nude figures—namely, a depiction of Adam and Eve being ousted from Eden. And between 1758 and 1759, Pope Clement XIII swathed even more sculptures in the Vatican’s collection with fig leaves.

A royal revolution: is Prince Charles's model village having the last laugh? In a room of raw concrete block walls and exposed steel beams, a man with a long hipster beard takes an order on his iPad and froths up a flat white. Young mums and retired couples sit at long communal tables among Wi-Fi workers. It could be a trendy east London cafe in a repurposed industrial space, but this is the centre of Poundbury, the Prince of Wales’s traditionalist model village in Dorset. And there’s not a doily or tweed jacket in sight.