How Well Do You Know The Great Gatsby? THE GREAT GATSBY Book Club Kit by PRH Library. Devon Glover: About the Artist. NorthByShakespeare TheoriesExplained 1. Postcards connecting the world - Postcrossing. The ‘Great Gatsby’ Glut. Struck by just how little the reader comes to know about Carraway, Smith remembers thinking, “It would be really interesting if someone were to write his story.” 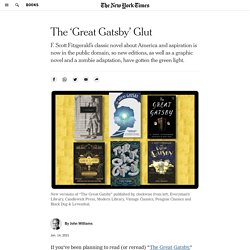 He immediately set out to do that, writing the novel five years ago, not telling his editor or agent. “I didn’t want to hear it was impossible,” Smith said. “I just knew I was emotionally invested in it and I wanted to do it. I didn’t even think about the copyright issue, to be honest. I just assumed it was expired.” It wasn’t. Often cited as a — if not the — great American novel, the new editions of “Gatsby” allow for fresh analysis, nearly a century later, of what our ideas of “American” now entail. Lee, a National Book Award finalist who moved to the United States from South Korea when she was 7, described herself as someone who’s “always approached books as a way to learn more about America.” Walls guide. LATW Digital Titles For Educators 2020 11 30.

Students. Listen Now for Free As You Like It By: William Shakespeare Rosalind is banished from court and follows her exiled father into the untamed Forest of Arden. 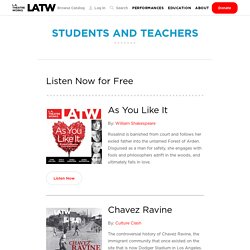 Disguised as a man for safety, she engages with fools and philosophers adrift in the woods, and ultimately falls in love. Listen Now Chavez Ravine By: Culture Clash The controversial history of Chavez Ravine, the immigrant community that once existed on the site that is now Dodger Stadium in Los Angeles. Cyrano de Bergerac By: Edmond Rostand The dandy with a prominent nose is confident in battle, but relentlessly self-doubting in love, and is unable to express his devotion to the beautiful Roxane. Catalog. Open Source Introduction to Emily Dickinson. Nov 02, 2020 2020-11-02 Digital Learning • Learning Support To address the remote learning needs of different audiences, the Emily Dickinson Museum offers virtual syllabi for students, scholars, and writers on its website. 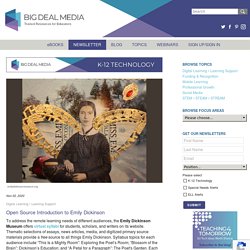 Five College Compass - Digital Collections. Idioms - List of Idioms - Idioms for Kids. Visuwords. Enter words into the search box, "visualize a word," to look them up. 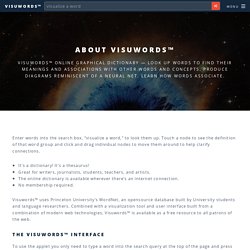 Touch a node to see the definition of that word group and click and drag individual nodes to move them around to help clarify connections. It's a dictionary! It's a thesaurus! Great for writers, journalists, students, teachers, and artists. The online dictionary is available wherever there’s an internet connection. Visuwords™ uses Princeton University’s WordNet, an opensource database built by University students and language researchers. The Visuwords™ Interface To use the applet you only need to type a word into the search query at the top of the page and press 'Enter'.

Synsets Each synset node is shown as a globe. "is a kind of" — hyponym/hypernym pair With regards to "wheat" and "grain", we see a cyan link from "wheat" pointing towards "grain" we can understand this to mean that wheat "is a kind of" grain. This Year in Books by Amazon Charts. Mere Reading: The Poetics of Wonder in Modern American Novels: Lee Clark Mitchell: Bloomsbury Academic. “In a career-long recoil from an early, maternally-induced, and short-lived brush with Evelyn Woods' speed reading techniques, Lee Clark Mitchell has slackened the velocity, which is only to say tightened the grip, of his textual habits ever since-and the yield, as in two engrossing and indispensable chapters on Cormac McCarthy, is sampled here in readings that neither hydroplane across the surface of the literary page, nor approach it in programmatic slow-mo, but that let a deliberately wide variety of stylistic traction and density pace the ear of reading and test the very possibilities of attention. 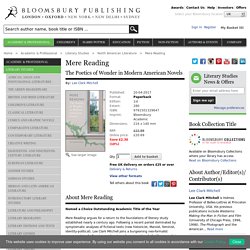 Unostentatiously termed 'mere' (as in 'simply') reading, the results are instead, in their deployment of seasoned gifts, an intense and exemplary case of sheer reading.” – Garrett Stewart, James O. Freedman Professor of Letters, University of Iowa, USA, and author of The Deed of Reading (2015) “Remember how it felt to read books when you were a child?