Disney Dates A Ton Of Pics Into 2023 & Juggles Fox Releases. This afternoon, Disney reserved a ton of slots for Fox features all the way into 2023. 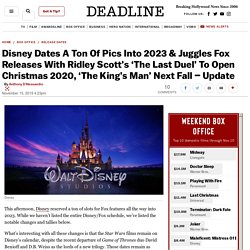 While we haven’t listed the entire Disney/Fox schedule, we’ve listed the notable changes and tallies below. What’s interesting with all these changes is that the Star Wars films remain on Disney’s calendar, despite the recent departure of Game of Thrones duo David Benioff and D.B. Weiss as the lords of a new trilogy. Those dates remain as December 16, 2022; December 20, 2024, and December 18, 2026. Matthew Vaughn’s The King’s Man, which is already being promoted in theaters, is a prequel to his Kingsmen series starring Ralph Fiennes. Related Story 'Loki': Sophia Di Martino Joins Tom Hiddleston in Marvel Limited Series For Disney+ Halle Bailey is cast as mermaid Ariel in Disney's 'The Little Mermaid'; Twitter celebrates. Jodi Benson isn’t exactly a household name but for many she’s a part of their childhood. 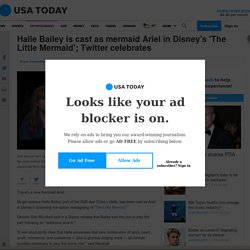 She was the voice behind Ariel, the heroine of the Disney hit “The Little Mermaid.” And she has very passionate fans. (May 10) AP, AP There's a new mermaid Ariel. Singer-actress Halle Bailey, part of the R&B duo Chloe x Halle, has been cast as Ariel in Disney’s upcoming live-action reimagining of "The Little Mermaid. " Director Rob Marshall said in a Disney release that Bailey was the one to play the part following an "extensive search.

" "It was abundantly clear that Halle possesses that rare combination of spirit, heart, youth, innocence, and substance — plus a glorious singing voice — all intrinsic qualities necessary to play this iconic role," said Marshall. Jodi Benson voiced the character in the 1989 original, directed by Ron Clements and John Musker. Bailey tweeted love after the casting from the Chloe and Halle shared account, writing "dream come true" with mermaid and wave emojis. Disney-Fox Updates Release Schedule: Sets Three Untitled ‘Star Wars’ Movies, ‘New Mutants’ Heads To 2020, ‘Ad Astra’ To Open Fall & More. Marvel Project in Development From ‘Wonder Woman’ Writer. ABC has given a production commitment to a series that will feature female Marvel superheroes, Variety has confirmed. 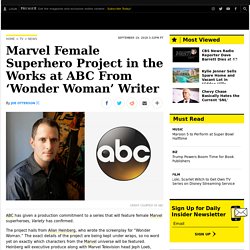 The project hails from Allan Heinberg, who wrote the screenplay for “Wonder Woman.” The exact details of the project are being kept under wraps, so no word yet on exactly which characters from the Marvel universe will be featured. Heinberg will executive produce along with Marvel Television head Jeph Loeb, with Marvel TV and ABC Studios producing. Heinberg is working on the series under his overall deal with ABC Studios. A veteran comic book writer for Marvel and DC, Heinberg’s television credits include “The Catch,” “The Naked Truth,” “Party Of Five,” “Sex And The City,” “Gilmore Girls,” “The O.C.,” “Grey’s Anatomy,” “Looking,” and “Scandal.” 'Talent': Fox Developing TV Series Based on Boom! Studios Comic.

Yet another comic book is making its way to television, as Fox is looking to give life to Boom! 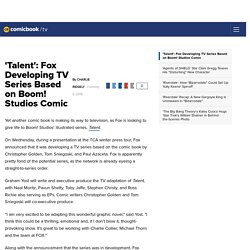 Studios' illustrated series, Talent. On Wednesday, during a presentation at the TCA winter press tour, Fox announced that it was developing a TV series based on the comic book by Christopher Golden, Tom Sniegoski, and Paul Azaceta. Fox is apparently pretty fond of the potential series, as the network is already eyeing a straight-to-series order. Graham Yost will write and executive produce the TV adaptation of Talent, with Neal Moritz, Pavun Shetty, Toby Jaffe, Stephen Christy, and Ross Richie also serving as EPs. Comic writers Christopher Golden and Tom Sniegoski will co-executive produce. “I am very excited to be adapting this wonderful graphic novel," said Yost.

Disney/Fox merger: what Disney owns now. Disney’s $71.3 billion purchase of the film and TV assets held by 21st Century Fox — the company behind everything from the Alien movies to The Simpsons — is one of the biggest media mergers ever. 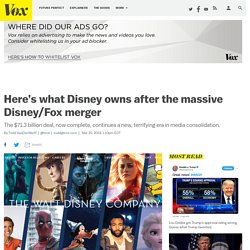 It also marks the first time a major movie studio has simply ceased to exist as an independent entity since the decay of MGM in the 1980s, taking the number of big movie studios in Hollywood from six down to five (Disney, Warner Bros., Sony, Universal, and Paramount). And as of 12:02 am Eastern time on Wednesday, March 20, 2019, the merger is officially complete. In this era of ever-accelerating media consolidation, the implications of this deal are pretty staggering — not to mention alarming to anyone who’s at all concerned about said consolidation.

And if you’re an employee of either Disney or the former Fox, the threat of expected layoffs hangs over your head. So the deal comes complete with lots of dark portents. But there are some things we do know. Disney unveils latest addition to ‘Disney Princesses’ as 20th Century Fox takeover is completed. Disney and Fox Merger Officially Closes. After months of negotiations and regulatory procedures, the highly anticipated merger between the Walt Disney Company and 21st Century Fox has officially closed. 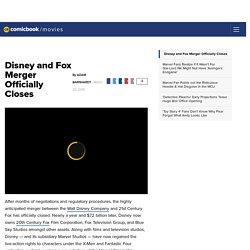 Nearly a year and $72 billion later, Disney now owns 20th Century Fox Film Corporation, Fox Television Group, and Blue Sky Studios amongst other assets. Along with films and television studios, Disney — and its subsidiary Marvel Studios — have now regained the live-action rights to characters under the X-Men and Fantastic Four umbrellas, certainly welcome news to fans of the Marvel Cinematic Universe. The acquisition comes at a time when the House of Mouse is going all-in with their own streaming service in Disney+.

Set to compete with the likes of Netflix, Amazon Prime, and the dozens of other streaming apps available today, the platform has a reported 18 movies and 16 television shows in development exclusive to the service. Proposed acquisition of 21st Century Fox by Disney. Acquisition of 21st Century Fox by Disney The logos of The Walt Disney Company and 21st Century Fox History[edit] Early information[edit] On November 16, 2017, it was reported that Comcast (parent company of NBCUniversal), Verizon Communications, and Sony had also joined Disney in a bidding war for 21st Century Fox.[12][13] During a recent shareholders meeting, 21st Century Fox Co-Chairman Lachlan Murdoch stated that Fox was not a "sub-scale" company "finding it difficult to leverage their positions in new and emerging video platforms", but had "the required scale to continue to both execute on our aggressive growth strategy and deliver significant increased returns to shareholders".[14] Rumors of a nearing deal continued on December 5, 2017, with additional reports suggesting that the FSN regional sports networks would be included in the sale (assets that would likely be aligned with Disney's ESPN division).[18][19][20][21] 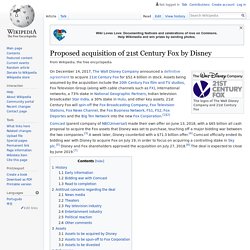 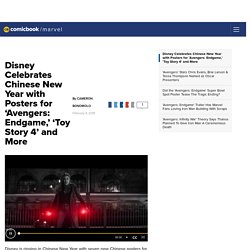 The posters feature Chinese spins on Captain Marvel (March 8), Dumbo (March 29), Aladdin (May 24), Avengers: Endgame (April 26), Toy Story 4 (June 21), The Lion King (July 19) and Frozen 2 (November 22). Disney in 2019 could top its record-breaking 2018, where it earned $7.33 billion globally on the backs of billion-plus grossers Black Panther and Incredibles 2, $2 billion grosser Avengers: Infinity War, the highest-grossing superhero movie in history and the fourth highest-grossing movie of all time. 2018 had the second-biggest performance for any studio in history, taking second behind only Disney’s own $7.61 billion record achieved in 2016.

Its domestic box office in 2018 set a new record at $3.09 billion, up from $3 billion in 2016. Comcast makes $65 billion offer to steal 21st Century Fox away from Disney. Disney-Fox merger shareholder approval. What consumers can expect. Disney and Fox Deal Clears Another Major Hurdle With Conditions. Disney's purchase of Fox assets just took a major step toward being finalized today, as the European Commission cleared the acquisition under a few conditions.

Based on the new report from The Hollywood Reporter, the Walt Disney Company's big purchase just cleared a major hurdle in getting European approval, though there are some tweaks to made. "To address the Commission's competition concerns, Disney committed to divest its interest in all factual channels it controls in the European Economic Area (EEA), namely: History, H2, Crime & Investigation, Blaze and Lifetime channels," said a statement from the European Commission. "These channels are currently controlled by A+E Television Networks, which is a joint venture between Disney and Hearst.