Star Wars' Mark Hamill on importance of cut Luke Skywalker scene. Star Wars legend Mark Hamill isn't afraid to voice his grievances when it comes to some of the questionable decisions made throughout the franchise. 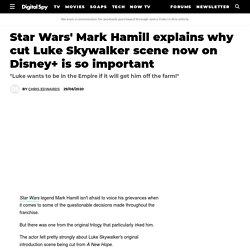 But there was one from the original trilogy that particularly irked him. The actor felt pretty strongly about Luke Skywalker's original introduction scene being cut from A New Hope. Thankfully, it's now available to watch on Disney+, but Hamill believes it would have added an extra dimension to his character had it been left in the film. Getty Images Related: Star Wars' Mark Hamill teases more about his secret roles in Solo and Rogue One While appearing on a recent episode of Russo Bros. "There a couple of things that are good for the character," said Hamill. "And then I bump into Biggs Darklighter, played by Garrick Hagon, and I go 'Wow! ' "And he takes me outside and says, 'Luke, as soon as I get the chance, I am going to jump ship and join the Rebels.'" Lucasfilm Sign up for Disney+

Star Wars confirms who Rey's father really was. First they were "nobodies", and then it was later revealed they were anything but – but the true identities of Rey's parents weren't entirely explained when her heritage was discovered in Star Wars: The Rise of Skywalker. 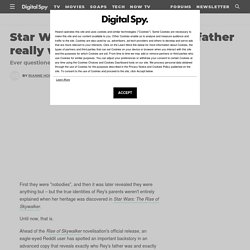 Until now, that is. Ahead of the Rise of Skywalker novelisation's official release, an eagle-eyed Reddit user has spotted an important backstory in an advanced copy that reveals exactly who Rey's father was and exactly how the galaxy's biggest baddie got his heir – in all its horrific detail. We've only just found out that Palpatine was a clone in The Rise of Skywalker (explaining his comeback), and now it turns out that Rey's father is actually a "not-quite-identical clone" of the villain. LucasfilmDisney. Star Wars series set 200 years before prequel trilogy is coming. The Star Wars universe will continue its venture into literature with the release of a new series, titled The High Republic. 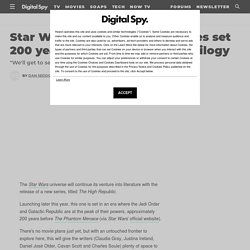 Launching later this year, this one is set in an era where the Jedi Order and Galactic Republic are at the peak of their powers, approximately 200 years before The Phantom Menace (via Star Wars' official website). There's no movie plans just yet, but with an untouched frontier to explore here, this will give the writers (Claudia Gray, Justina Ireland, Daniel José Older, Cavan Scott and Charles Soule) plenty of space to introduce new heroes and captivating storylines through books and comics. Lucas Films Related: Star Wars' Daisy Ridley lands first post-Rise of Skywalker movie Lucasfilm president Kathleen Kennedy said: "We are so excited to be opening up such a rich, fertile era for our authors to explore. Bye bye box office: has Disney really given up on Star Wars movies? So that’s it. 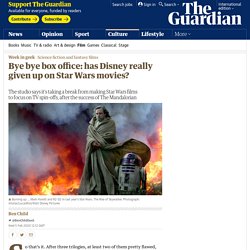 After three trilogies, at least two of them pretty flawed, and more than $10bn taken at the global box office, Star Wars as a going Hollywood concern is being parked. Stalled like an X-wing in a Dagobah swamp, this story has reached its finale with the insipid, crushingly disappointing The Rise of Skywalker – a movie that seemed determined to confirm every criticism aimed at the latest triptych of films. That they existed only to sell movie tickets and merchandise. Lavish Test Footage for Cancelled Live-Action Star Wars TV Show Resurfaces. With the success of The Mandalorian, a new season of The Clone Wars coming to Disney+ in a few weeks, and news of a live-action Obi-Wan show hitting the same platform somewhere down the horizon, it can be hard to remember a time before Star Wars television seemed like a natural extension of the franchise. 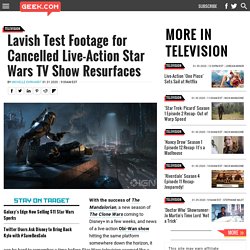 But in 2005, shortly after Star Wars: Revenge of the Sith hit theaters, the only small screen presence for the series was the old Holiday Special, a few forgotten children’s cartoons from the ‘80s, and the great, but concluded Clone Wars mini-series that would eventually inspire the 3D show we have now. That is, until news started circulating about a new live-action, adult-oriented show named Star Wars: Underworld. Set in the lower layers of Coruscant between Episodes III and IV, George Lucas announced Star Wars: Underworld at Star Wars Celebration III in 2005. So, what do you think? Star Wars Actor Warwick Davis Has a Surprising Pitch for Disney+ The world of Star Wars is vast and expansive, and Disney and Lucasfilm's strategy for the franchise seems to be looking in all kinds of different directions and bringing them to life on Disney+. 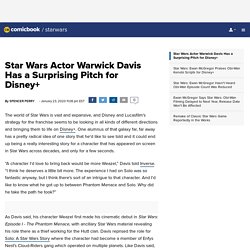 One alumnus of that galaxy far, far away has a pretty radical idea of one story that he'd like to see told and it could end up being a really interesting story for a character that has appeared on screen in Star Wars across decades, and only for a few seconds. “A character I'd love to bring back would be more Weazel,” Davis told Inverse. “I think he deserves a little bit more. The experience I had on Solo was so fantastic anyway, but I think there's sort of an intrigue to that character. And I'd like to know what he got up to between Phantom Menace and Solo. George Lucas changed Han Solo’s scene with Greedo in Star Wars, Disney confirms. Disney+ arrived with seven chapters of the Skywalker saga, but people have started to notice something strange about the first Star Wars film, A New Hope: it has an entirely different edit than the ones fans have seen before. 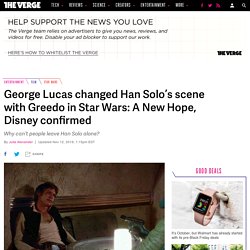 The change was “made by George made prior to the Disney acquisition,” a Disney representative told The Verge. The new edit, which was first spotted by the Star Wars Visual Comparisons Twitter account, features an entirely new insert of the Rodian bounty hunter Greedo saying something while talking to Han Solo in the Mos Eisley cantina on Tatooine. The famous scene, which depicted the two characters having a tense conversation about the money Solo owned, was originally filmed and edited to feature Solo shooting Greedo first. The Special Edition release of A New Hope in 1997 was edited to feature Greedo shooting first. Disney: next Star Wars film is from Game of Thrones creators. Earlier this month, The Walt Disney Company revealed a full slate of movies through 2027, which included new titles from Lucasfilm, Marvel Studios, Pixar, Walt Disney Animation, and the branches of the newly acquired 20th Century Fox. 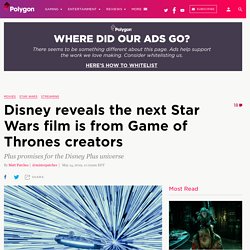 The plans were sprawling and exciting for fans of Disney’s various properties, but for Star Wars fans, waiting would be the hardest part: the next installment after this December’s Star Wars: The Rise of Skywalker would not arrive until 2022. But thanks to a little insight from Disney CEO Bob Iger, we know a little more about what that movie will be — or at least who to hound for details in the future. During a Disney investors call, Iger revealed that the next film in a brand new Star Wars saga would be the mystery project written by Game of Thrones creators David Benioff and D.B. Weiss. Twitter. 'The Mandalorian' is described as Clint Eastwood in 'Star Wars' 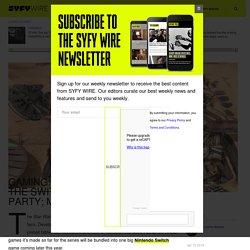 Developer Zen Studios, who’s been releasing new Star Wars-themed pinball tables like clockwork since 2013, revealed this week that all the pinball games it’s made so far for the series will be bundled into one big Nintendo Switch game coming later this year. Long available on PC, mobile, and other consoles, Star Wars Pinball spans all the way from 2013’s Boba Fett and Empire Strikes Back releases to last year’s lineup, which included a table themed around Solo: A Star Wars Story. Nintendo shared a teaser video to go along with the announcement: In addition to the regular tables (there are 19 in all), the Switch game will also feature enhancements including a new vertical play mode (so you can literally flip your Switch sideways), a jukebox mode for the game’s soundtrack, and a career mode that lets you pad new stats on top of your previous achievements. How many games are we talking? New 'Star Wars Jedi: Fallen Order' Teaser Released. EA Star Wars has shared yet another teaser for the upcoming reveal of Star Wars Jedi: Fallen Order. 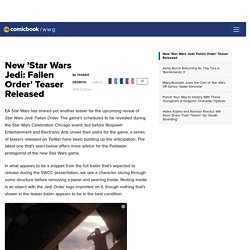 ‘Star Wars Jedi: Fallen Order’ and New ‘Titanfall’ Coming This Fall. Disney Announces They Are Leaving Star Wars Game Publishing Rights to Publishers. Disney CEO Bob Iger has announced that the company will be leaving the publishing rights for future Star Wars games to the publishers. According to him, Disney isn't very good at the self-publishing side of things. During a recent quarterly earnings call for Disney, per The Hollywood Reporter, Iger acknowledged the company’s ineffectiveness when it comes to publishing their own video games.

“We’re obviously mindful of the size of that business but over the years we’ve tried our hand at self-publishing … and we’ve found that we haven’t been particularly good at the self-publishing side,” he said. The Mandalorian Details Spilled by Director Taika Waititi. Posted on Monday, February 4th, 2019 by Fred Topel. Star Wars Finally Ends The Most Powerful Jedi Argument. Email WARNING: The following article contains spoilers for Star Wars: Age of Republic Special #1 by Ethan Sacks, Paolo Villanelli, Erick Arciniega, Carlos Gomez, Jody Houser, Dono Sanchez-Almara, Marc Guggenheim, Caspar Wijngaard, Cris Peter and VC's Travis Lanham, on sale now. In the Star Wars Universe, a decades-old argument has always been which Jedi is the most powerful. Diehard movie lovers would insist it's Luke Skywalker, especially after what we learned about him in The Last Jedi.

Others tout his father, the former Chosen One, Anakin Skywalker (of course, that's before he turned to the Dark Side as Darth Vader). Star Wars: Ewan McGregor Claims There Are "No Plans" for Obi-Wan Kenobi Film. For more than a decade since the release of Revenge of the Sith, star Ewan McGregor has shared his affinity for playing Obi-Wan Kenobi, having regularly volunteered his services to play the character in a new film. Unfortunately, if such a project is currently being developed, it is happening without McGregor involved, as he recently shared that he's unaware of such a project existing. “I would totally do it, of course,” the actor shared when asked if he would return to the Star Wars saga as a guest on The View. “ no plans as such to do it, as far as I know.”

The prequel Star Wars films might not have been considered fulfilling adventures for devout fans, though McGregor has been almost unanimously praised for his performance as Kenobi, delighting fans both knew and old with the portrayal. “There must be a good story to tell as they’re doing spin-offs – there’s likely to be a good Obi-Wan between me and Alec Guinness," McGregor noted. Star Wars: Carrie Fisher and Richard E Grant among Episode IX cast. Image copyright Reuters The cast for the next Star Wars film has been revealed in a surprise announcement, with a mixture of veteran stars and new faces set to appear. The late actress Carrie Fisher will feature in Episode IX using previously unseen footage that was recorded for Star Wars: The Force Awakens.

The star, who played Princess Leia in the film series, died suddenly in 2016. Billy Dee Williams, 81, will reprise his role as Lando Calrissian and Richard E Grant will join the cast. "We desperately loved Carrie Fisher," director JJ Abrams said in a statement announcing the line-up. "We have found a way to honour Carrie's legacy and role as Leia in Episode IX by using unseen footage we shot together in Episode VII. " Mark Hamill, who was catapulted to fame by the first Star Wars film in 1977, will return as Luke Skywalker. British actress Naomi Ackie, who starred in the 2017 film Lady Macbeth, will join the cast in an as yet unnamed role.

Media playback is unsupported on your device.