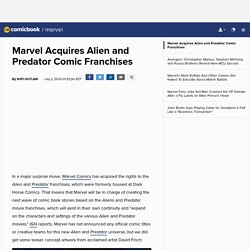 That means that Marvel will be in charge of creating the next wave of comic book stories based on the Aliens and Predator movie franchises, which will exist in their own continuity and "expand on the characters and settings of the various Alien and Predator movies," IGN reports. Marvel has not announced any official comic titles or creative teams for this new Alien and Predator universe, but we did get some teaser concept artwork from acclaimed artist David Finch: Here's what David Finch had to say about getting to draw both the Alien "Big Chap" Xenomorph and this Iron Man-killing Predator: "Alien and Predator are the two of the most identifiable, iconic characters of all time, and I love them for that. But mostly, it’s being fortunate enough to be a kid when they were new. Revenge Rules in Marvel's Bounty Hunters, Set for March 2020 - Exclusive. Some of the most notorious gunfighters in Star Wars will soon take center stage. 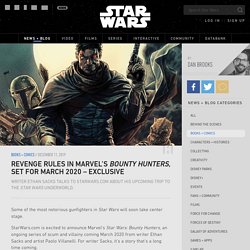 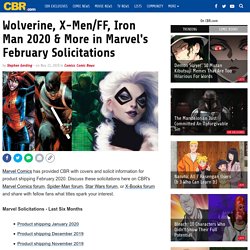 Discuss these solicitations here on CBR's Marvel Comics forum, Spider-Man forum, Star Wars forum, or X-Books forum and share with fellow fans what titles spark your interest. The Future Arrives for Marvel Comics in New 2020 Variant Covers. 'Spider-Man: Noir' Will Rise Again in March 2020. Become an Investigative Journalist with The Daily Bugle. The Top 10 Must-Read WOLVERINE Stories. Wolverine’s eponymous first limited series has held up over decades as the character’s most defining tale. 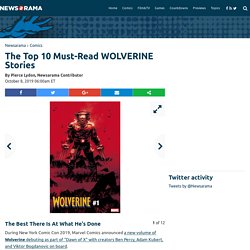 Chris Claremont and Frank Miller solidify Logan as a character that is defined by duality. While fans are usually drawn to the X-Men’s resident badass because of his gruff demeanor and penchant for brutality, Claremont makes it very clear that there’s intense emotion at Logan’s core that drives him. Wolverine sees Ol’ Canucklehead harnessing those emotions as he slices and dices his way through the ninja gang known as the Hand in order to rescue his love, Mariko Yashida. Claremont reveals Wolverine’s samurai past, adding another layer of mystery to Logan’s already mysterious past. Miller’s visceral linework lends itself perfectly to the proceedings as Logan struggles to rein in his ferality and rage but isn’t afraid to take a life in service of his mission.

Marvel Comics to Reveal Final Fates of Deadpool, Miles Morales and Captain America - NYCC 2019 - IGN. Marvel Brings Back a Deadly Villain to Face Jane Foster. She-Hulk: Breaking The Fourth Wall Before Deadpool. Over the nearly 40 years of her history, She-Hulk has made a name for herself. 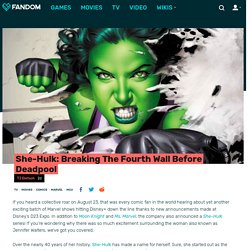 Sure, she started out as the lawyer cousin of Bruce Banner who Hulked out after a blood transfusion, but since then she’s blazed her own path in comics, one that often pokes fun at the medium itself and even its fans. Green Genes Debuting in 1980’s The Savage She-Hulk #1, Stan Lee and John Buscema introduced readers to Walters when her cousin Bruce showed up for a visit. While on a drive, she explained her latest case which revolved around a man being framed for murder by a mob boss. When she pulled into her driveway, she was shot by hoods looking to stop her investigation. Marvel Teases What's Next for Venom After Absolute Carnage. Writer Donny Cates and artist Mark Bagley will team-up for Venom #21, which will be the start of "Venom Island. 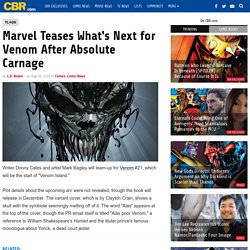 " Plot details about the upcoming arc were not revealed, though the book will release in December. The variant cover, which is by Clayton Crain, shows a skull with the symbiote seemingly melting off of it. The word "Alas" appears at the top of the cover, though the PR email itself is titled "Alas poor Venom," a reference to William Shakespeare's Hamlet and the titular prince's famous monologue about Yorick, a dead court jester.

RELATED: EXCLUSIVE: Scream #2 Settles a Grudge Between Two Venom Rivals Continue scrolling to keep readingClick the button below to start this article in quick view. And Stitcher Expand Partnership by Launching New Fictional Podcast Series ‘Marvels’ The series is part of the celebration marking the 25th anniversary of Kurt Busiek and Alex Ross’s award-winning four-part comic book MARVELS, which was released to critical acclaim in 1994. 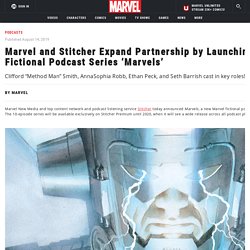 Based on MARVELS, this podcast revisits the story of photojournalist, Phil Sheldon, as he navigates through the chaos caused by the Galactus invasion of New York City and explores what it means to be human in a universe inhabited by Super Heroes. Marvel Teases the X-Men's Most Important Scene in Its History. Marvel Comics Announces Star-Studded 80th Anniversary Anthology. JANE FOSTER Changes From THOR to VALKYRIE in Ongoing Title. New details of Marvel Comics' upcoming Valkyrie ongoing series have been revealed on Marvel.com - including the identity of the hero taking on the mantle of the fabled guide to departed heroes. 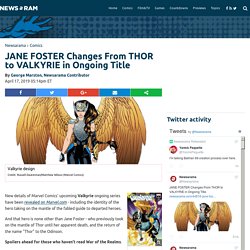 And that hero is none other than Jane Foster - who previously took on the mantle of Thor until her apparent death, and the return of the name "Thor" to the Odinson. Spoilers ahead for those who haven't read War of the Realms. Foster has been seen alive and well in War of the Realms, as a cancer-free mortal - including in this week's War of the Realms #2, in which the classic Valkyrie, Brunhilde, apparently died. As previously announced, Al Ewing and Jason Aaron will co-write the ongoing title, with Ewing billed as the lead writer. Cafu is the series artist. "There's a line in Valkyrie #1: 'Thor is a god, Valkyrie is a job.' Jane Foster: Valkyrie #1 is due out in July. Marvel Announces New 'Valkyrie' Series. Marvel is set to give Valkyrie the spotlight in a new series. 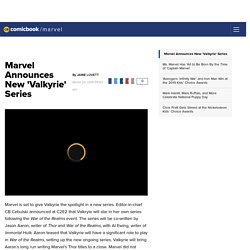 Editor-in-chief CB Cebulski announced at C2E2 that Valkryie will star in her own series following the War of the Realms event. The series will be co-written by Jason Aaron, writer of Thor and War of the Realms, with Al Ewing, writer of Immortal Hulk. INVISIBLE WOMAN Reunites with MARK WAID For New Title. Press Release She’s always been a super hero, fighting to keep the world safe with the Fantastic Four…and now, it’s time for Sue Storm to take the spotlight in her own series! 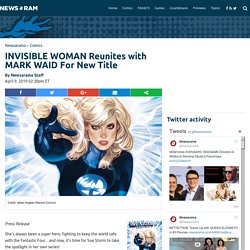 This July, the superstar creative team of Mark Waid (Avengers No Road Home, Doctor Strange), Mattia De Iulis (Jessica Jones), and Adam Hughes (Star Wars, Captain America) take Sue on a journey that will unlock the secrets of her past in the most surprising way! Years ago, after becoming part of the Fantastic Four, everyone’s favorite Invisible Woman was taking on adventures of her own on an espionage mission for S.H.I.E.L.D. Now, it’s up to Sue to save her former partner from danger before it’s too late! “In over fifty years, she’s never had her own title (or maybe she did and you just didn’t see it,)” teases SVP and Executive Editor Tom Brevoort. Don’t miss Sue’s incredible adventures in INVISIBLE WOMAN #1, only in comic shops this July! Stan Lee webcomic Backchannel relaunching after Marvel legend's death. Stan Lee’s death was a major blow for the world of comics and the entertainment industry at large — including those working with the Marvel legend on what would be one of his last comic projects.

That project is the webtoon Backchannel — basically a mobile-oriented, scrollable webcomic more popular in Korea than the U.S., and which is relaunching after a long hiatus since its co-creator’s passing. Co-written by Lee and Tom Akel, with art by Andie Tong, Backchannel is about tech savant Tom Tanner, who gets zapped during a mysterious electromagnetic event that turns his brain into a powerful computer able to combine telekinesis with everything a hacker can do to cell phones, email, and power grids.

And of course he uses these powers for good. It’s Stan Lee, after all. Now the webtoon is coming back, resuming its weekly publication schedule with a new chapter posting today. Marvel Reveals Carnage-ized Variants. At C2E2, Marvel Comics announced its big Venom and Carnage event, Absolute Carnage. Now they've announced plans to celebrate with a series of 25 variant covers showing some of Marvel's biggest heroes getting "Carnage-. " In the same spirit as Marvels' Venomized variants, the covers show Marvel heroes bonding with the murderous Carnage symbiote.

“Cletus Kasady is back, and he is deadlier than he’s ever been,” writer Donny Cates said when the event was announced. “Absolute Carnage encompasses every single character who has ever worn a Symbiote and every Symbiote that has ever been, going all the way back to when Peter found the black suit. Going from there to Maximum Carnage to Venomized to everything… everyone is a target.” The variants will release in July. 1. 2. A Marvel Hero Copes With Bipolar Disorder. Marvel's War of the Realms Hits the Fantastic Four's Doorstep.

Rumor Disney Is Shutting Down Marvel Comics Causes Online Uproar. Disney is riding high on the success of Marvel Studios, but some fans are taking a new Marvel Comics panel as a sign the company could eventually close down the longtime comics publisher. This all started with Marvel Comics' announcement of a panel at SXSW (South by Southwest), which will bring Marvel Editor in Chief C.B. Cebulski and Chief Creative Officer Joe Quesada together for an hour-long panel. The panel is titled Marvel: From Comics To Screens and will analyze how the comics act as the lifeblood and pulse of the movies, games, and television shows that are dominating the market right now. An article by Bleeding Cool suggested that perhaps the panel is to prove to Disney that Marvel Comics as an entity is needed if all those other mediums are meant to grow, as those are built on the stories, characters, and worlds that are explored and created in the comics.

Other sites then ran with that narrative, causing more than a few reactions online. "Must be a slow news day.