Trendy Web Color Palettes and Material Design Color Schemes & Tools. A few weeks ago, Matt DesLauriers @mattdesl, a graphics programmer working at Jam3, showed us an interesting development carried out on our platform. 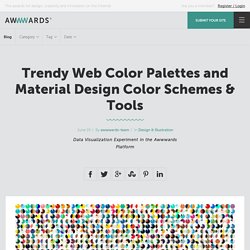 As you already know, Awwwards has been collecting information on the most noteworthy websites since 2009 – something which makes us an essential source for web design trend analysis. The project started as an experiment, I was just learning Node at the time and decided to see if I could scrape Awwwards for some data visualization. Matt developed a tool which requests each page of the Awwwards winner gallery, then searches the HTML for all the available metadata like site name, author, date, URL, thumbnail, etc. The RGB pixels of each thumbnail are analyzed to get a rough color palette of the 3 primary colors. The result is this brilliant data visualization in which each site is represented as a pie graph showing the distribution of its 3 primary colors. 1. 20 Sites of the Day with Great Color Schemes #c0dfd9 #e9ece5 #b3c2bf #3b3a36. Dezeen Watch Store. 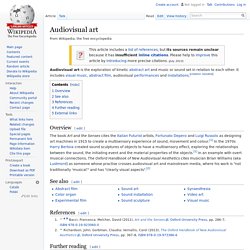 It includes visual music, abstract film, audiovisual performances and installations. [citation needed] Overview[edit] KULTURA%20Strategija%20(1) This Architecture Life. Drawing ARCHITECTURE. Hristina Hristova's tiny holiday home can be towed on a trailer. Award-winning building destroyed by volcano. Having a baby VS having a cat. David Chipperfield creates "village" of stone dwellings. David Chipperfield Architects has completed a series of stone apartments raised on plinths above the surface of a water garden in Hangzhou, eastern China (+ slideshow). 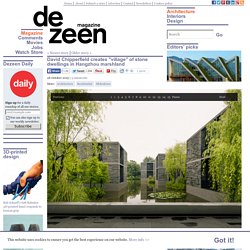 The Xixi Wetland Estate was designed by the British architect's Berlin and Shanghai offices for the Xixi National Wetland Park. The park stands on the outskirts of the city, which is located at one end of the world's longest artificial waterway, the Grand Canal. Long blocks of grey stone were used to construct the 20 duplex apartments, which are arranged on matching grey podiums in the water. All 20 homes are connected by an H-shaped walkway, which is surrounded by aquatic planting. Underground car parking is located below this pedestrianised area. First images of SANAA-designed Grace Farms building revealed. The first official photographs of SANAA's sinuous cultural centre at the Grace Farms nature reserve in Connecticut have been released ahead of its opening tomorrow (+ slideshow). 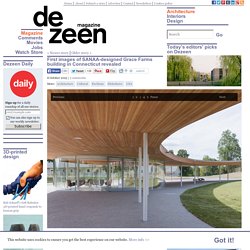 Called The River, the 83,000-square-foot (7710 square metres) structure is a series of five pavilions linked by a curved roof, which descend a gently sloping hillside on a former farm site in New Canaan. Each space includes a different function: a sanctuary, library, gymnasium, orientation centre, and a commons with a cafe. Culture. South African Township Barbershops & Salons. Like so many underdeveloped places, South Africa's townships (often written off by tourists as undesirable and dangerous) have long been rich sources of legendary music and culture. 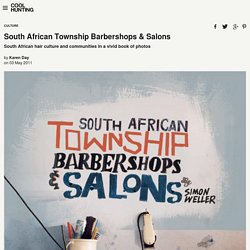 A Visit Inside One of the Only Hand-crafted Globe Studios in the World. Long gone are the days when our first instinct is to migrate to a spinning globe to track the destinations around us or find a specific country. 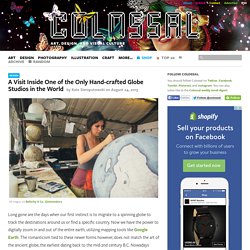 Now we have the power to digitally zoom in and out of the entire earth, utilizing mapping tools like Google Earth. The romanticism tied to these newer forms however, does not match the art of the ancient globe, the earliest dating back to the mid-2nd century B.C. Nowadays globes are either modern and massively produced, or antiquated models unsuited for casual browsing. Frustrated by this lack of quality options when trying to find a globe as a present, Peter Bellerby started Bellerby & Co. Art. An art, design, and visual culture blog.

Audiovisual Tricycles by ‘VJ Suave’ Project Animations on the Streets of Rio de Janeiro. Pay attention folks, interactive public art doesn’t get much better than this. 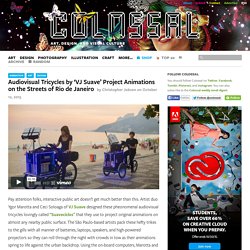 Artist duo Ygor Marotta and Ceci Soloaga of VJ Suave designed these pheonomenal audiovisual tricycles lovingly called “Suaveciclos” that they use to project original animations on almost any nearby public surface. RNDRD. Krakow Oxygen Home Architecture Competition. As one of the oldest cities in Europe, Krakow draws in crowds of tourists in the millions every year; it also draws in extremely high levels of pollution. 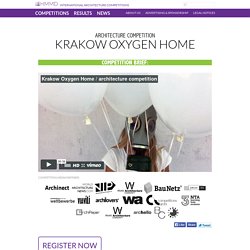 As the city with the highest levels of air pollution in Europe, it has been claimed that the smog causes 30% of chronic obstructive lung disease cases and that the air’s toxins are directly linked to the country’s high cancer rates. HMMD’s latest architecture competition is a chance for participants to submit designs for a lung cancer care centre. Its purpose is to provide psychological support and an opportunity to socialise with others who understand what each patient is going through. The centre should be a fairly small building that includes a community room with facilities such as a small library, play zone and kitchen. There will also need to be an office where psychiatrists and counsellors can help those dealing with lung cancer as well as a first aid room to provide medical support when needed. 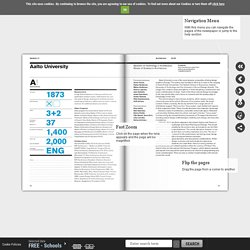 Design Father. A Trip To Tampa. Recently, we were invited by Lufthansa to travel to Tampa, the third-largest city on the west coast of Florida, USA. 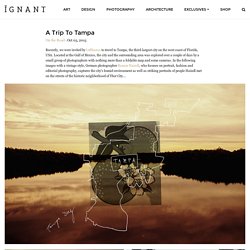 Located at the Gulf of Mexico, the city and the surrounding area was explored over a couple of days by a small group of photographers with nothing more than a foldable map and some cameras. In the following images with a vintage style, German photographer Ramon Haindl, who focuses on portrait, fashion and editorial photography, captures the city's humid environment as well as striking portraits of people Haindl met on the streets of the historic neighborhood of Ybor City... All images © Ramon Haindl.