WiFi Based Distributed IOT Home Automation. The idea is based on ESP8266 nodes or any other module that has WIFI connectivity and enough processing power and capacity to send UDP broadcast and run a small web server. 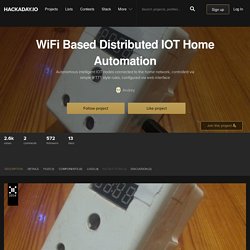 The aim is every node to broadcast via UDP its sensor values, serve out its own management interface and to be able to 'see' the sensor values from the other nodes. Also nodes that are able to switch things ON and OFF or 'DO' any actual work have a simple IFTTT like rule engine. This type of set up allows for autonomous operation of each node with reporting and configuration functions as well as building a complex home automation system based on simple rules involving different nodes' sensor values. The first node is a 'smart plug' with ESP8266-12 NodeMCU 1.0, ACS712 30A hall-effect current sensor, 30A relay module and 7-segment display module based on the TM1637 chip.

I am writing the code through the Arduino IDE with the help of the "Arduino core for ESP8266 Wi-Fi chip" project. Arduino 37 sensors - TkkrLab. Arduino 37 sensors From Jump to: navigation, search We bought a kit from dealextream 37-in-1 sensor kit but found out that the documentation was very poor. 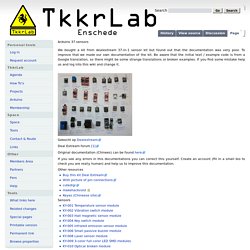 To improve that we made our own documentation of the kit. Be aware that the initial text / example code is from a Google translation, so there might be some strange translations or broken examples. Pi 3 wifi range. I believe the RPi 3's wifi issues come down entirely to transmit. 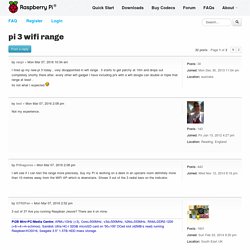 My Pi is roughly 20 feet of open air from a Google OnHub. As a result of the wifi issues, I cabled it to Ethernet, but _did not disable wifi_. I was doing mtr testing from another host on the LAN to both the wired and wifi interfaces on the Pi, and seeing excellent results on each, which surprised me. Of course, the routing table was causing asymmetric routing, so all packets entering the wifi interface were being responded to on the Ethernet interface. Hardware & Software Development. Options for using Raspberry Pi for Digital Signage. Posts about using the $35 Raspberry Pi for a digital signage project tend to generate a lot of reader interest, and some work I’ve been doing has required me to poke around a bit to see what all is out there. 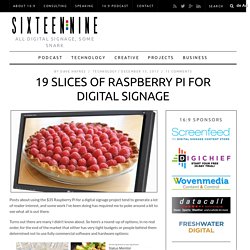 Turns out there are many I didn’t know about. So here’s a round-up of options, in no real order, for the end of the market that either has very tight budgets or people behind them determined not to use fully commercial software and hardware options: How to get Wi-Fi and Bluetooth working on Raspberry Pi 3. The latest Raspberry Pi (Raspberry Pi 3) now comes with its own built in Wi-Fi and Bluetooth 4.1/Low Energy (LE) support, thanks to the BCM43438 chip. 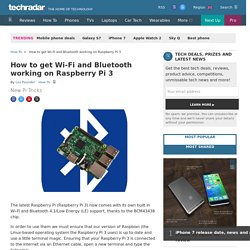 In order to use them we must ensure that our version of Raspbian (the Linux-based operating system the Raspberry Pi 3 uses) is up to date and use a little terminal magic. Ensuring that your Raspberry Pi 3 is connected to the internet via an Ethernet cable, open a new terminal and type the following: $ sudo apt-get update $ sudo apt-get dist-upgrade This step may take some time depending on the amount of updates required and the speed of your internet connection. Tzapu/WiFiManager: ESP8266 WiFi Connection manager with web captive portal. Free Dynamic DNS Server with Esp8266 and OSD FOSCAM Webcam Interface. Make your own DDNS Server to access your home internet devices, no paid service needed! 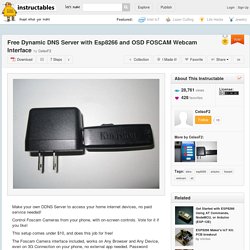 Control Foscam Cameras from your phone, with on-screen controls. Vote for it if you like! This setup comes under $10, and does this job for free! The Foscam Camera interface included, works on Any Browser and Any Device, even on 3G Connection on your phone, no external app needed. Password protected. Shows online Foscam cameras in separate windows, fast and flawless with full control. I am not responsible for any misuse or damage caused by this project, by any means. Fun and Unique Electronics for Everyone! What Is The ESP8266? 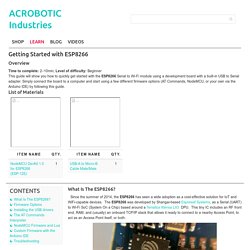 Since the summer of 2014, the ESP8266 has seen a wide adoption as a cost-effective solution for IoT and WiFi-capable devices. The ESP8266 was developed by Shangai-based Espressif Systems, as a Serial (UART) to Wi-Fi SoC (System On a Chip) based around a Tensilica Xtensa LX3 DPU. This tiny IC includes an RF front end, RAM, and (usually) an onboard TCP/IP stack that allows it ready to connect to a nearby Access Point, to act as an Access Point itself, or both. Family of Breakout Boards Quickly after launch, a variety of breakout boards for the ESP8266 started becoming available. 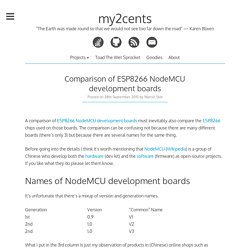 The comparison can be confusing not because there are many different boards (there’s only 3) but because there are several names for the same thing. Before going into the details I think it’s worth mentioning that NodeMCU (Wikipedia) is a group of Chinese who develop both the hardware (dev kit) and the software (firmware) as open-source projects. If you like what they do please let them know. Names of NodeMCU development boards It’s unfortunate that there’s a mixup of version and generation names. What I put in the 3rd column is just my observation of products in (Chinese) online shops such as Banggood and AliExpress. What further contributes to the naming jungle is precisely the fact that the hardware is open-source and anyone can produce and market NoduMCU development boards. Comparison of NodeMCU development boards 1st generation / v0.9 / V1 2nd generation / v1.0 / V2. Nodemcu/nodemcu-devkit.

Learn Electronics and Arduino Just By Watching These Videos. Advertisement Learning to program your own electronics is empowering and rewarding, but it can be difficult to get started without guidance. 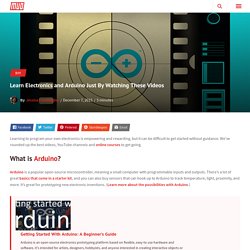 We’ve rounded up the best videos, YouTube channels and online courses to get going. What is Arduino? Arduino is a popular open-source microcontroller, meaning a small computer with programmable inputs and outputs. There’s a lot of great basics that come in a starter kit, and you can also buy sensors that can hook up to Arduino to track temperature, light, proximity, and more. Compilar ffmpeg en Raspbian con soporte h264. Linux Projects - News. Linux Projects - News. Using the Raspberry Pi to control AC electric power » TechNotes. Notice. 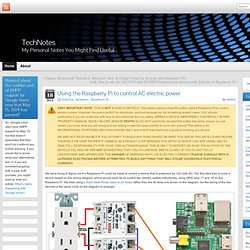 Looking For A DIY Home Security System Solution? Try One Of These. In the age of digital technology and always connected hardware, setting up a home security system should transcend the art of putting an alarm-shaped box on the wall. Securing your home in the 21st century should instead utilise all affordable technology to create a system that not only detects, but also alerts, as well as doing its best to identify. Such security systems can prove expensive to buy as a packaged option, as well as being a little inflexible. DIY security systems offer us a better degree of versatility, as well as having the added bonus of being less costly. While a DIY option may take longer to setup, the results can be just as good, or even better, than those available through electronics stores and security vendors.

Sorry iPhone users. I don’t have an iPhone, but I expect many/most of these apps are available for iPhone too. These apps are used for a whole range of activities, so I’ll try to put them in a reasonably logical order. Each app has an icon by its title. Building an open source Nest — Spark Blog. Earlier this week, Google bought Nest, a connected devices company, for $3.2 billion.

This might seem like an ungodly sum for a company that makes thermostats and smoke detectors, but it makes absolute sense. Nest’s products are beautifully designed, their team is overflowing with talent, and they were the first company to figure out what the “Internet of Things” means to consumers and deliver products that people actually want. But in order to do this, Nest had to spend millions of dollars on R&D to build the basic infrastructure behind the product. HOWTO: Use Android Tablet as a screen / keyboard. Hi, I received my RPi today, and have to say to the creators that I am very impressed with this little device, and think this is great for youngsters. Omxplayer no muestra acentos en subtitulos. Omxplayer. Open Source Hardware. NFC Between Android and Arduino. ** Update ** Someone has already started work on the library. Introduction ← BrickPi. Introduction ← BrickPi. Introduction ← BrickPi. Blog Archive » Setting up Raspberry Pi’s for scraping.

Durability - How can I extend the life of my SD card? These methods should increase the lifespan of the SD card by minimising the number of read/writes in various ways: Disable Swap Swapping is the process of using part of the SD card as volatile memory. XRDP cómo acceder al escritorio de la Raspberry de forma remota. Folders2flickr - Flickr upload power tool. This tool (python script) will automatically upload and organize pictures on Flickr.It is best used with Cron or some task scheduler so you don't have to worry about your pictures not being backed up. The tool is still in development so use at your own risk. Instalar Arch Linux y Kali Linux en Raspberry Pi (arranque dual con BerryBoot) The Dark Pi Rises. How to stream video from your RasPiCam to your Nexus 7 tablet using VLC. Yesterday I went to the Cambridge Jam. [Tutorial] mldonkey-server en Raspberrypi.