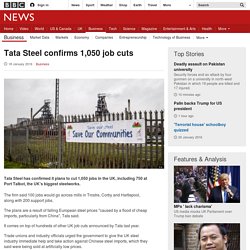 The firm said 100 jobs would go across mills in Trostre, Corby and Hartlepool, along with 200 support jobs. The plans are a result of falling European steel prices "caused by a flood of cheap imports, particularly from China", Tata said. It comes on top of hundreds of other UK job cuts announced by Tata last year. Trade unions and industry officials urged the government to give the UK steel industry immediate help and take action against Chinese steel imports, which they said were being sold at artificially low prices. Karl Koehler, chief executive of Tata Steel's European operations, said: "I know this news will be unsettling for all those affected, but these tough actions are critical in the face of extremely difficult market conditions which are expected to continue for the foreseeable future. " 'Toxic cocktail' What is Tata Steel? Housing crisis: Not enough homes and prices too high. Why can't the UK build 240,000 houses a year? 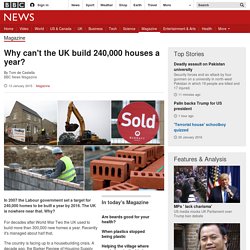 The UK is nowhere near that. Why? For decades after World War Two the UK used to build more than 300,000 new homes a year. Recently it's managed about half that. The country is facing up to a housebuilding crisis. That target has been consistently missed - the closest the UK got was in 2006-07 when 219,000 homes were built. In May 2014, Mark Carney, governor of the Bank of England, complained that housebuilding in the UK was half that of his native Canada, despite the UK having a population twice the size.

How did it become so hard to build houses? Planning permission About 95% of housebuilders surveyed this year thought that the "modest" industry target to build 200,000 new homes a year by 2016 was unachievable. The planning system and local opposition to building were two of the main reasons cited. The HBF says it can still be slow to get from outline to detailed planning. Finally! Exposed! The Deficit Myth! So, David Cameron When Are You Going to Apologise?  "A lie gets halfway around the world before the truth has a chance to get its pants on" - Winston Churchill As a Conservative I have no pleasure in exposing David Cameron's deficit claims. 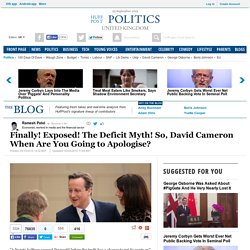 However, as long as the party continues to talk down the economy via the blame game, confidence will not be given an opportunity to return. For it is an undeniable and inescapable economic fact: without confidence and certainty there can be no real growth. Below are the three deficit claims - the mess. The evidence comes from the IMF, OECD, OBR, HM Treasury, ONS and even George Osborne.

Oil Prices & Energy News: Crude Oil Price Charts, Investment Advice. 68,000 Illegal Immigrants With Criminal Records Released. This post will mark the third time in recent weeks that I have covered the math the Obama administration uses to back up its claim that it has strictly enforced the immigration laws of these United States. 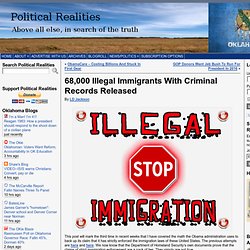 The previous attempts are here and here. We now know that the Department of Homeland Security’s own documents prove that the claims of strict immigration enforcement are a pack of lies. They simply are not true. The Hill – U.S. Immigration and Customs Enforcement officials last year released 68,000 illegal immigrants with criminal convictions, undercutting Democratic claims that President Obama has strictly enforced immigration laws.An internal Department of Homeland Security document compiling statistics on arrests and deportations in 2013 showed that ICE agents encountered 193,357 illegal immigrants with criminal convictions but issued charging documents for only 125,478.

We need rent controls to solve London's housing crisis. In an unusual break from the disagreement, dissent and bickering that pervades politics, consensus has broken out amongst policy makers in the capital: London is in the midst of a housing crisis. 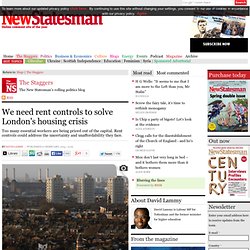 The facts are stark. Private rents in London have risen nine per cent since December 2011. Property price growth has returned to pre-2008 levels and is on the brink of exceeding it.Higher rents make it difficult to save a deposit, and rapid house price growth pushes the size of that deposit further and further out of reach. Indeed, those two factors combined mean that the projected average age by which a young person will be able to buy their first home in London is now 52. Sixty six per cent of first home buyers are supported by the bank of Mum and Dad in order to afford a deposit. London has reached the point where the cost of housing is affecting productivity growth.

London clearly needs to build more homes. But let me be clear about what I mean when I talk about rent control.