Matematics and all kind of theories in physics and sciences.

Describing the very ‘beginning’ of the Universe is a bit of a problem. 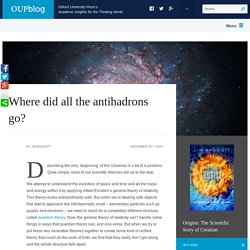 Quite simply, none of our scientific theories are up to the task. We attempt to understand the evolution of space and time and all the mass and energy within it by applying Albert Einstein’s general theory of relativity. This theory works extraordinarily well. But when we’re dealing with objects that start to approach the infinitesimally small – elementary particles such as quarks and electrons – we need to reach for a completely different structure, called quantum theory. Now, the general theory of relativity can’t handle some things in ways that quantum theory can, and vice versa. So far, nobody has been able to figure out how to fix this. It’s therefore no surprise that there are many mysteries surrounding the very beginning of the Universe, in a hot ‘big bang’. Oops. There must be something else going on.

The mystery deepens. Australian scientists have recreated a famous experiment and confirmed quantum physics's bizarre predictions about the nature of reality, by proving that reality doesn't actually exist until we measure it - at least, not on the very small scale. 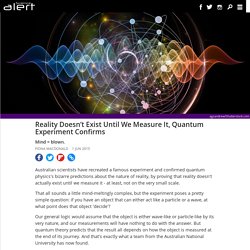 That all sounds a little mind-meltingly complex, but the experiment poses a pretty simple question: if you have an object that can either act like a particle or a wave, at what point does that object 'decide'? Our general logic would assume that the object is either wave-like or particle-like by its very nature, and our measurements will have nothing to do with the answer. But quantum theory predicts that the result all depends on how the object is measured at the end of its journey. And that's exactly what a team from the Australian National University has now found. "It proves that measurement is everything. Quantum physics. Quantum Physics As Metaphor For Decision Making. An international group of physicists, including Aleksandr Golubov, head of the MIPT Laboratory of Topological Quantum Phenomena in Superconductor Systems, recently presented results of experiments testing a new phenomenon in the journal Science. 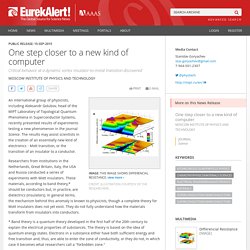 The results may assist scientists in the creation of an essentially new kind of electronics - Mott transition, or the transition of an insulator to a conductor. Researchers from institutions in the Netherlands, Great Britain, Italy, the USA and Russia conducted a series of experiments with Mott insulators. These materials, according to band theory,* should be conductors but, in practice, are dielectrics (insulators). In general terms, the mechanism behind this anomaly is known to physicists, though a complete theory for Mott insulators does not yet exist. They do not fully understand how the materials transform from insulators into conductors. Image via ISUB/WikiMedia Commons A theory with 26 dimensions, objects with imaginary mass that could ruin the very physics of our universe, and the notion that particles and forces are only excitations of vibrational modes—string theory, and all that it entails, is mind-boggling. 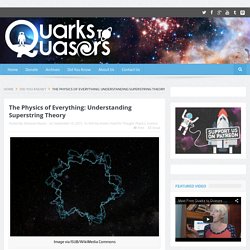 However, how can it possibly work? After all, we only experience four dimensions (three of space and one of time), so 26 dimensions is 22 too many. That’s where “superstring theory” comes in. Physical Review A - Accepted Paper: Limited preparation contextuality in quantum theory leads to Cirel'son bound. Mathematicians investigating one of science's great questions—how to unite the physics of the very big with that of the very small—have discovered that when the understanding of complex networks such as the brain or the Internet is applied to geometry the results match up with quantum behavior. 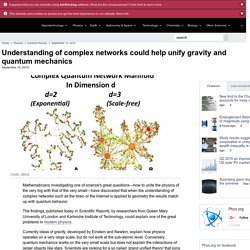 The findings, published today in Scientific Reports, by researchers from Queen Mary University of London and Karlsruhe Institute of Technology, could explain one of the great problems in modern physics. Currently ideas of gravity, developed by Einstein and Newton, explain how physics operates on a very large scale, but do not work at the sub-atomic level.

Conversely, quantum mechanics works on the very small scale but does not explain the interactions of larger objects like stars. Scientists are looking for a so called 'grand unified theory' that joins the two, known as quantum gravity. Dr Ginestra Bianconi, from Queen Mary University of London, and lead author of the paper, said: In the year 1908, while the great minds of natural philosophy were puzzling over how to understand the structure of atoms in terms of the recently-discovered electron, Vladimir Lenin (yes, that Vladimir Lenin) declared that: The electron is as inexhaustible as the atom Lenin was making a philosophical point, but you can view his declaration as something like a scientific prediction. 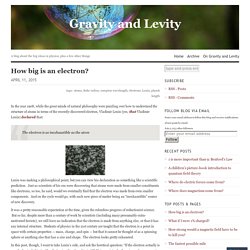 Just as scientists of his era were discovering that atoms were made from smaller constituents like electrons, so too, he said, would we eventually find that the electron was made from even smaller components. In 1905, Albert Einstein determined that the laws of physics are the same for all non-accelerating observers, and that the speed of light in a vacuum was independent of the motion of all observers. 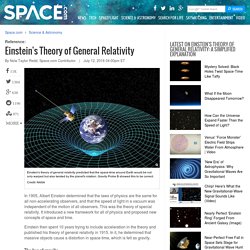 This was the theory of special relativity. It introduced a new framework for all of physics and proposed new concepts of space and time. Einstein then spent 10 years trying to include acceleration in the theory and published his theory of general relativity in 1915. In it, he determined that massive objects cause a distortion in space-time, which is felt as gravity. Quantum Foam. [1211.4952] A discussion on the origin of quantum probabilities. What is Supersymmetry? Biology. 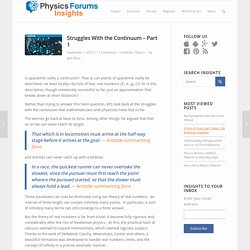 That is, can points of spacetime really be described—at least locally—by lists of four real numbers ? Or is this description, though immensely successful so far, just an approximation that breaks down at short distances? Rather than trying to answer this hard question, let’s look back at the struggles with the continuum that mathematicians and physicists have had so far. The worries go back at least to Zeno. Among other things, he argued that that an arrow can never reach its target: "Confirms Quantum Origin of the Universe" Data collected by Planck telescope have confirmed beyond any logical uncertainty a theory of the quantum origin of structure in the Cosmos. 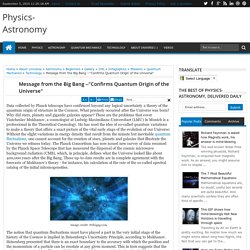 What precisely occurred after the Universe was born? Why did stars, planets and gigantic galaxies appear? Quantum Random Walks and the S&P 500 - Political Calculations. From time to time, we'll conclude our more remarkable posts with the phrase "Welcome back to the cutting edge! 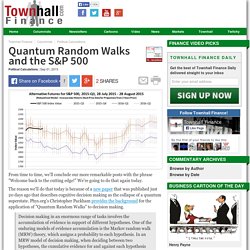 [1202.5097v1] Matter Non-conservation in the Universe and Dynamical Dark Energy. [1209.2982v1] A Moduli Space of the Quaternionic Hopf Surface Encodes Standard Model Physics. [1206.4941v1] Emergent quantum mechanics as a classical, irreversible thermodynamics. [1208.1513] Tinker toy dynamics. [1011.5875] Quantum Field Theory, Black Holes and Holography. Dark matter hiding in stars may cause observable oscillations. (Phys.org)—Dark matter has never been seen directly, but scientists know that something massive is out there due to its gravitational effects on visible matter. Nano-trapped molecules are potential path to quantum devices. Single atoms or molecules imprisoned by laser light in a doughnut-shaped metal cage could unlock the key to advanced storage devices, computers and high-resolution instruments.

In a paper published in Physical Review A, a team composed of Ali Passian of the Department of Energy's Oak Ridge National Laboratory and Marouane Salhi and George Siopsis of the University of Tennessee describes conceptually how physicists may be able to exploit a molecule's energy to advance a number of fields. "A single molecule has many degrees of freedom, or ways of expressing its energy and dynamics, including vibrations, rotations and translations," Passian said. "For years, physicists have searched for ways to take advantage of these molecular states, including how they could be used in high-precision instruments or as an information storage device for applications such as quantum computing. " Explore further: Standoff sensing enters new realm with dual-laser technique. The Sky this Week: September 18-27, 2015. Sunset on Pluto [Slide Show]