BiographyMy life is a Path. Every decision is a cross road. My decisions are driven by will and knowledge, love and wisdom, passion and desire, logic and irrational. I do not own the truth. I only want to be right and every mistake makes me better. I love to take a step to unknown. That is why I am here!

Experiment and findings. Music and arts. Inspioring peoples. Some comments and inspirations. Word Press Files. Shakespeare and film around the world. From the birth of film, Shakespeare’s plays have been a constant source of inspiration for many screenwriters, directors, and producers. 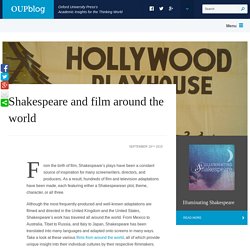 As a result, hundreds of film and television adaptations have been made, each featuring either a Shakespearean plot, theme, character, or all three. Although the most frequently-produced and well-known adaptations are filmed and directed in the United Kingdom and the United States, Shakespeare’s work has traveled all around the world. Religious belief: A natural phenomenon. Suppose the government runs random screening for a very rare mutation – Mutation X – present in 1 in every million. 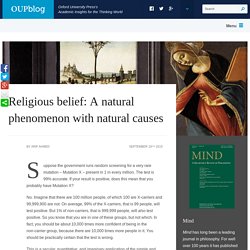 The test is 99% accurate. If your result is positive, does this mean that you probably have Mutation X? No. The Genesis and Renaissance of General Relativity. Cosmology in the 21st Century: PI Public Lecture by Dr. Kendrick Smith. (via. Neil Turok and the Astonishing Simplicity of Everything: Webcast Trailer. Pinterest. (via. Pinterest. The Beginning of Everything. The History and Future of Everything. My Galaxies. Risto's bookshelf: all (showing 1-13 of 13) (sorted by: date added) Studia Generalia syksy 2011: Aineen arvoitus - Helsingin yliopiston Avoin yliopisto. TWAN project official website. A stunning collection of nightscape photos (night sky above landscape) are selected as the winners and honorable mention photos of the 5th International Earth & Sky Photo Contest. 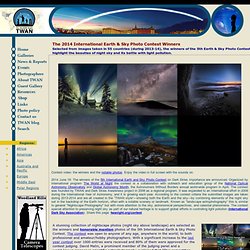 The contest was open to anyone of any age, anywhere in the world; to both professional and amateur/hobby photographers. With a significant increase to the last year contest over 1000 entries were received and 80% of them were approved for the contest judging. David Malin, a prominent member of the judging panel and a world-known pioneer in scientific astrophotography explained that "This competition encourages photographers with imagination to push their cameras to their technical limits, and to produce eye-catching images that appear perfectly natural and are aesthetically pleasing.

Help. How much do you know about fool's gold? [quiz] Matthias Christandl, Bergfinnur Durhuus and Jan Philip Solovej. Getting to know Anna Hernandez-French, Assistant Editor in Journals. From time to time, we try to give you a glimpse into our offices around the globe. 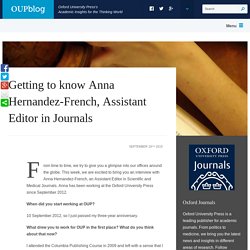 This week, we are excited to bring you an interview with Anna Hernandez-French, an Assistant Editor in Scientific and Medical Journals. Anna has been working at the Oxford University Press since September 2012. When did you start working at OUP? 10 September 2012, so I just passed my three-year anniversary. What drew you to work for OUP in the first place? I attended the Columbia Publishing Course in 2009 and left with a sense that I was more suited to academic publishing than trade.

What publication do you read regularly to stay up to date on industry news? The publication I read most regularly is the Scholarly Kitchen blog, which features posts on key journals publishing topics from a variety of viewpoints (Editors, Librarians, Service Providers, etc.) within the industry and the larger academic community. Embedded image permalink. Who was Giles Cory? Nima Arkani-Hamed Public Lecture: Quantum Mechanics and Spacetime in the 21st Century. 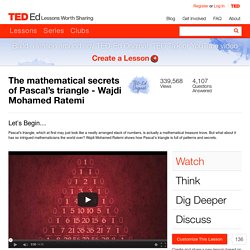 Visit this site and find out more about Pascal’s Triangle! Having some trouble doing the questions in the lesson? Visit the Math Forum @ Drexel and get some hints on how to solve problems similar to the ones you just worked on! Practice makes perfect. The Sky this Week: September 18-27, 2015. The US just partnered with China to build a bullet train between LA and Vegas. Americans can look forward to zooming between LA and Las Vegas at 240 km/h in a new high-speed bullet train that’s set to whittle the 370-kilometre trip down, from 4 hours in a car to just 80 minutes by train. 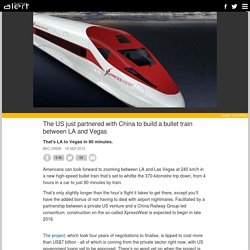 That’s only slightly longer than the hour’s flight it takes to get there, except you’ll have the added bonus of not having to deal with airport nightmares. Facilitated by a partnership between a private US venture and a China Railway Group-led consortium, construction on the so-called XpressWest is expected to begin in late 2016. The project, which took four years of negotiations to finalise, is tipped to cost more than US$7 billion - all of which is coming from the private sector right now, with US government loans yet to be approved.

There’s no word yet on when the project is expected to be operational. This won’t be the first bullet train to run between major American cities. 150918180310. A first draft of the "tree of life" for the roughly 2.3 million named species of animals, plants, fungi and microbes -- from platypuses to puffballs -- has been released. 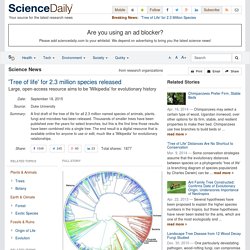 A collaborative effort among eleven institutions, the tree depicts the relationships among living things as they diverged from one another over time, tracing back to the beginning of life on Earth more than 3.5 billion years ago. Tens of thousands of smaller trees have been published over the years for select branches of the tree of life -- some containing upwards of 100,000 species -- but this is the first time those results have been combined into a single tree that encompasses all of life.

Dark matter hiding in stars may cause observable oscillations. (Phys.org)—Dark matter has never been seen directly, but scientists know that something massive is out there due to its gravitational effects on visible matter. 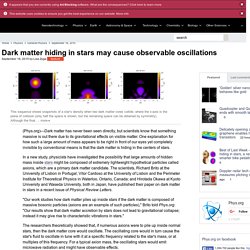 One explanation for how such a large amount of mass appears to be right in front of our eyes yet completely invisible by conventional means is that the dark matter is hiding in the centers of stars. In a new study, physicists have investigated the possibility that large amounts of hidden mass inside stars might be composed of extremely lightweight hypothetical particles called axions, which are a primary dark matter candidate.

Nano-trapped molecules are potential path to quantum devices. Single atoms or molecules imprisoned by laser light in a doughnut-shaped metal cage could unlock the key to advanced storage devices, computers and high-resolution instruments. 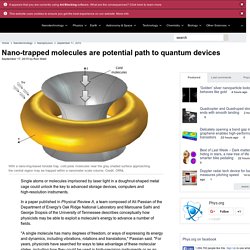 In a paper published in Physical Review A, a team composed of Ali Passian of the Department of Energy's Oak Ridge National Laboratory and Marouane Salhi and George Siopsis of the University of Tennessee describes conceptually how physicists may be able to exploit a molecule's energy to advance a number of fields. "A single molecule has many degrees of freedom, or ways of expressing its energy and dynamics, including vibrations, rotations and translations," Passian said. "For years, physicists have searched for ways to take advantage of these molecular states, including how they could be used in high-precision instruments or as an information storage device for applications such as quantum computing.

" Explore further: Standoff sensing enters new realm with dual-laser technique. Image an atom (Shutterstock) 150917160200. Invisibility cloaks are a staple of science fiction and fantasy, from Star Trek to Harry Potter, but don't exist in real life, or do they? 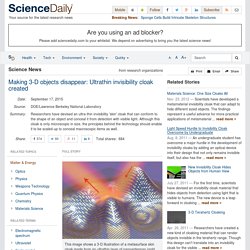 Scientists at the U.S. Department of Energy (DOE)'s Lawrence Berkeley National Laboratory (Berkeley Lab) and the University of California (UC) Berkeley have devised an ultra-thin invisibility "skin" cloak that can conform to the shape of an object and conceal it from detection with visible light. Although this cloak is only microscopic in size, the principles behind the technology should enable it to be scaled-up to conceal macroscopic items as well. Working with brick-like blocks of gold nanoantennas, the Berkeley researchers fashioned a "skin cloak" barely 80 nanometers in thickness, that was wrapped around a three-dimensional object about the size of a few biological cells and arbitrarily shaped with multiple bumps and dents.

Zhang, who holds the Ernest S. Imperial College London media library : Quantum theory: it's unreal. Here's why our most irrational decisions could be a result of quantum theory. New research looking at the relationship between human decision-making and mathematics has turned up a surprising finding: our most irrational choices might be explained by the theories of quantum mechanics. The idea is that the choices we face are all co-existing at the same time, until we make a decision - at that point all other possibilities disappear from our minds.

"Our beliefs don't jump from state to state: instead we experience a feeling of ambiguity about all of the states simultaneously," one of the researchers, Zheng Joyce Wang from Ohio State University, told The Independent. When we're faced with a choice, she says, quantum theory enables our minds to shift between each option in a state of indecision until the exact moment that we make a decision.

"We have accumulated so many paradoxical findings in the field of cognition, and especially in decision-making," explains Wang in a press release. “Our brain can’t store everything. Celebrating five years of Oxford Bibliographies. The librarians at Bates College first became interested in Oxford Bibliographies a little over five years ago. We believed there was great promise for a new resource OUP was developing, in which scholars around the world would be contributing their expertise by selecting citations, commenting on them, and placing them in context for end users.

It would be an innovative approach for finding authoritative and trusted sources, and one that was likely to work well in an online environment. In the summer of 2010, our research librarians agreed that they would really like to see how we might make use of Oxford Bibliographies at our undergraduate liberal arts institution. OUP also wished to work with libraries and their end users to make sure that needs for ongoing use would be met. Schrödinger's microbe: physicists plan to put living organism in two places at once.

Physicists have drawn up plans to put a living organism in two places at once in a radical demonstration of quantum theory. The scientists aim to suspend a common microbe in an uncertain state similar to that endured by Schrödinger’s cat, which is portrayed in the Nobel laureate’s famous thought experiment as dead and alive at the same time. But instead of harnessing the bizarre laws of the quantum world to hold a hapless bacterium in limbo, the uncertainty will centre on the bug’s geographical whereabouts. “It is cool to put an organism in two different locations at the same time,” Tongcang Li of Purdue University, Indiana, told the Guardian. “In many fairy tales, a fairy could be at two different locations or change locations instantly.

This will be similar to that. Instagram. Pinterest. Shock waves at Saturn could reveal secrets of exploding stars.