15 Best Responsive HTML5 AngularJS Templates 2016 - Responsive Miracle. AngularJS, commonly referred to as Angular, is an open-source web application framework maintained by Google and a community of individual developers and corporations to address many of the challenges encountered in developing single-page applications. 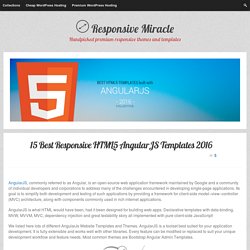 Its goal is to simplify both development and testing of such applications by providing a framework for client-side model–view–controller (MVC) architecture, along with components commonly used in rich internet applications. AngularJS is what HTML would have been, had it been designed for building web-apps. Declarative templates with data-binding, MVW, MVVM, MVC, dependency injection and great testability story all implemented with pure client-side JavaScript! We listed here lots of different AngularJs Website Templates and Themes. Metro. About Much like the Twitter Bootstrap project (which was one of the inspirations for this project), the site uses LESS to build the stylesheets on-the-fly. 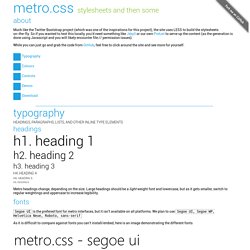 So if you wanted to test this locally, you'd need something like Jekyll or our own Pretzel to serve up the content (as the generation is done using Javascript and you will likely encounter permission issues). While you can just go and grab the code from GitHub, feel free to click around the site and see more for yourself. Typography Headings, paragraphs, lists, and other inline type elements Headings. MetroBlog - Home. Quickstart: adding WinJS controls and styles (Windows Store apps using JavaScript and HTML) The Windows Library for JavaScript provides a set of new controls designed for Windows Store apps using JavaScript, such as the WinJS.UI.DatePicker, WinJS.UI.FlipView, WinjS.UI.ListView, and WinJS.UI.Rating controls. 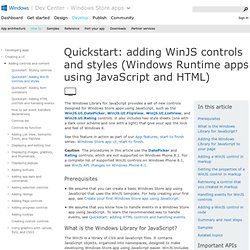 It also includes two style sheets (one with a dark color scheme and one with a light) that give your app the look and feel of Windows 8. See this feature in action as part of our App features, start to finish series: Windows Store app UI, start to finish. Caution The procedures in this article use the DatePicker and Rating controls, which are not supported on Windows Phone 8.1. Index of UX guidelines for Windows Store apps. Building Metro style apps using JavaScript. Droptiles - Metro style Live Tiles powered Web Dashboard. Introduction Droptiles is a Windows 8 Start like Metro style Web 2.0 Dashboard. It builds the experience using Tiles . Tiles are mini apps that can fetch data from external sources. Clicking on a tile launches the full app. Apps can be from any existing website to customized website specifically built to fit the Dashboard experience.

See it live! Get the code from: Features Metro style user interface. It even has its own App Store! How can you use Droptiles Enterprise Dashboard aggregating data from various systems and offering a launch pad for intranet/internet applications. Main parts There are three main parts in Droptiles: DashboardApp StoreLogin, Signup, Settings. Dashboard is the home page, that shows the tiles. App Store shows a collection of apps available for users to add on the Dashboard. Creating HTML-based Metro style apps using Blend Beta. The proliferation of rich interactive web applications across the cloud and mobile devices continues to create new opportunities for creative design and development. 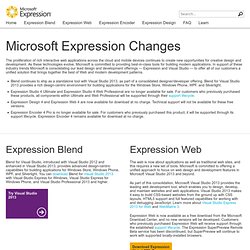 As these technologies evolve, Microsoft is committed to providing best-in-class tools for building modern applications. In support of these industry trends Microsoft is consolidating our lead design and development offerings — Expression and Visual Studio — to offer all of our customers a unified solution that brings together the best of Web and modern development patterns.

Blend continues to ship as a standalone tool with Visual Studio 2013, as part of a consolidated designer/developer offering. MetroBlog. My Metro Style Framework for Web Applications. Posted by tank6b on November 14, 2011 11:40 am Hey there, Since this site attracts a lot of developers and tech enthusiasts I'll like to show you what I'm working on. 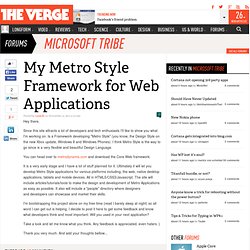 Is a Framework developing "Metro Style" (you know, the Design Style on the new Xbox update, Windows 8 and Windows Phones). I think Metro Style is the way to go since is a very flexible and beautiful Design Language. You can head over to metrodynamis.com and download the Core Web framework. It is a very early stage and I have a lot of stuff planned for it. I'm bootstrapping this project alone on my free time (read I barely sleep at night) so all word I can get out is helping. ASP.NET, Metro, HTML5. Metro Style UI With jQuery. February 21, 2012 12:07 PM / Dustin / jQuery Lately I've been toying around with the idea of incorporating Metro style elements into web designs. 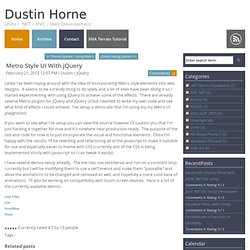 It seems to be a trendy thing to do lately and a lot of sites have been doing it so I started experimenting with using jQuery to achieve some of the effects. There are already several Metro plugins for jQuery and jQuery UI but I wanted to write my own code and see what kind of effects I could achieve. I've setup a demo site that I'm using my my Metro UI playground.

If you want to see what I've setup you can view the source however I'll caution you that I'm just hacking it together for now and it's nowhere near production ready. Metro. Builder « Jq-metro - jqMetro - jQuery plugin for metro UI controls. Untitled.