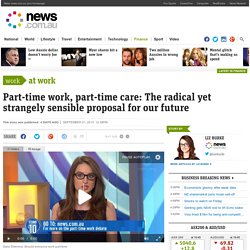 Courtesy: Studio Ten. Listen to Prof. Jennifer Nedelsky propose a radical new concept for work and care. Apparently This Needs Repeating: Work Isn't a Burden or a Penalty. So the New York Times asked me to write a “Room for Debate” piece based on this prompt: “Can companies excel without making workers miserable?” 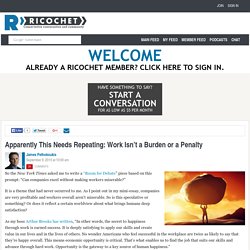 It is a theme that had never occurred to me. The Venus Project. The Venus Project is an organization that proposes a feasible plan of action for social change, one that works towards a peaceful and sustainable global civilization. 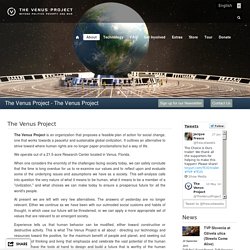 It outlines an alternative to strive toward where human rights are no longer paper proclamations but a way of life. We operate out of a 21.5-acre Research Center located in Venus, Florida. When one considers the enormity of the challenges facing society today, we can safely conclude that the time is long overdue for us to re-examine our values and to reflect upon and evaluate some of the underlying issues and assumptions we have as a society. This self-analysis calls into question the very nature of what it means to be human, what it means to be a member of a "civilization," and what choices we can make today to ensure a prosperous future for all the world's people. At present we are left with very few alternatives. Experience tells us that human behavior can be modified, either toward constructive or destructive activity. Federico Pistono. Formal presentation Federico Pistono is social entrepreneur, computer scientist, award-winning journalist, author, scientific educator, activist, and public speaker.

He holds a BSc in Computer Science from the University of Verona, and in 2012 he graduated from Singularity University, NASA Ames Research Park. His research has been utilized by major economic institutions, universities, and think tanks, such as the Society for Human Resource Management in collaboration with The Economist Intelligence Unit, and the Future of Jobs Summit in California. He has ten years of professional experience in a variety of difference fields—IT Management, System Administration with Unix and Linux systems, Web Development, Product Management, UX design, Human Machine Interaction, Journalism and Science Reporting, Editing, Screenwriting, and Directing.

He's Founder and CEO of Konoz, a website where one can learn anything for free and support their favorite YouTube creators. Profile image Contact info R. Robotic Freedom, by Marshall Brain. Robotic Freedom [Part 3 of the Robotic Nation series] by Marshall Brain If you have read the articles entitled Robotic Nation, Robots in 2015 and Manna, and if you have looked at the many robotic news items on this page, then you may be coming to a new realization. 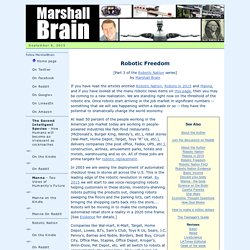 We are standing right now on the threshold of the robotic era. Once robots start arriving in the job market in significant numbers -- something that we will see happening within a decade or so -- they have the potential to dramatically change the world economy. 014: How Might We Respond to Technological Unemployment? Technologically enhanced basic income as a solution to technological unemployment. This proposal is presented for peer review purposes. 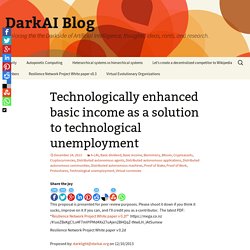 Please shoot it down if you think it sucks, improve on it if you can, and I’ll credit you as a contributor. The latest PDF: “Resilience Network Project White paper v 0.2f” Resilience Network Project White paper v 0.2d Proposed by: darklight@darkai.org on 12/10/2013. Technological Unemployment: The Past, Future and Possible Solutions. Technological unemployment is the notion that even as innovation creates new opportunities, it destroys old jobs. 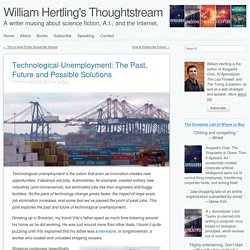 Automobiles, for example, created entirely new industries (and convenience), but eliminated jobs like train engineers and buggy builders. As the pace of technology change grows faster, the impact of large scale job elimination increases, and some fear we’ve passed the point of peak jobs. This post explores the past and future of technological unemployment. Growing up in Brooklyn, my friend Vito’s father spent as much time tinkering around his home as he did working. He was just around more than other dads. Shipping containers (specifically intermodal containers) started to be widely used in the late 1960s and early 1970s. As a result Vito’s father was paid a full salary, even though his job didn’t require him full time. Ten Responses to the Technological Unemployment Problem. On the internet and in the media there has been growing discussion of technological unemployment. 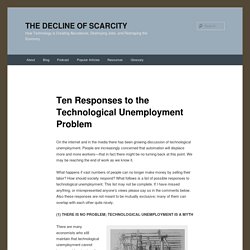 People are increasingly concerned that automation will displace more and more workers—that in fact there might be no turning back at this point. We may be reaching the end of work as we know it. What happens if vast numbers of people can no longer make money by selling their labor? How should society respond? What follows is a list of possible responses to technological unemployment. There are many economists who still maintain that technological unemployment cannot happen, at least not on the large scale described above.

This is a fairly straightforward solution. This is a more individual approach that does not rely on government intervention.