Montreal woman stunned after rental property host threatens to sue if she posts bad review - Montreal. Jacenta Girard and her family used Airbnb to rent a home near Picton, Ont. for a special getaway last month. 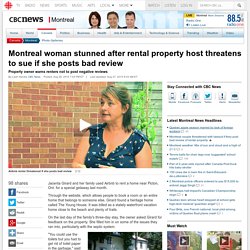 Through the website, which allows people to book a room or an entire home that belongs to someone else, Girard found a heritage home called The Young House. Wonolo, Temp Worker App, Shows Scary Future of Sharing Economy. The last few years have brought an explosion of startups, like Uber and TaskRabbit, that effectively act as middlemen. 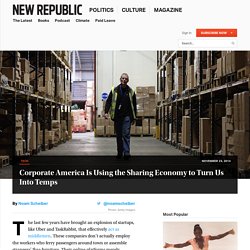 Radio Motherboard: Are Uber Drivers Employees or Independent Contractors? Uber drivers set their own hours, file taxes independently, and often own their cars. 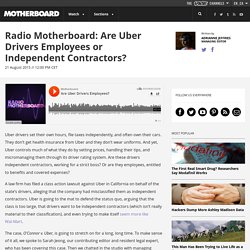 They don’t get health insurance from Uber and they don’t wear uniforms. And yet, Uber controls much of what they do by setting prices, handling their tips, and micromanaging them through its driver rating system. Are these drivers independent contractors, working for a strict boss? Or are they employees, entitled to benefits and covered expenses?

A law firm has filed a class action lawsuit against Uber in California on behalf of the state’s drivers, alleging that the company had misclassified them as independent contractors. The 1099 Economy Workforce Survey. The 1099 Economy Workforce Survey. Worker survey reveals challenges of sharing economy - SFGate. Bits.blogs.nytimes. The Gig Economy Won't Last Because It's Being Sued To Death. Silicon Valley’s Contract-Worker Problem. Earlier this year, I hired a house cleaner.

I wouldn't have done so normally, but my place was a mess, I was busy at work, and I saw an offer on Facebook that looked too good to be true — a San Francisco start-up called Homejoy was offering home cleanings in the Bay Area for $19. (Not $19 per room or $19 per hour. Just $19.) Silicon Valley’s Contract-Worker Problem. How co-operatives can help sustain the sharing economy. A profound change is taking place in the UK economy – and it’s not a good one for workers. 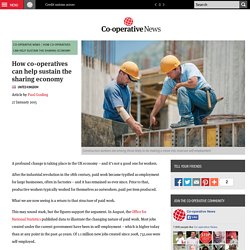 After the industrial revolution in the 18th century, paid work became typified as employment for large businesses, often in factories – and it has remained so ever since. Prior to that, productive workers typically worked for themselves as outworkers, paid per item produced. What we are now seeing is a return to that structure of paid work. This may sound stark, but the figures support the argument.

In August, the Office for National Statistics published data to illustrate the changing nature of paid work. Platform Cooperativism vs. the Sharing Economy. Cross-posted from Medium Graphic by Linda Levy The backlash against unethical labor practices in the “collaborative sharing economy” has been overplayed. 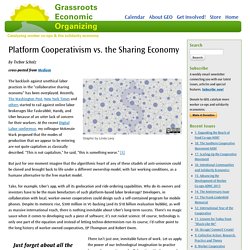 Recently, The Washington Post, New York Times and others started to rail against online labor brokerages like Taskrabbit, Handy, and Uber because of an utter lack of concern for their workers. Why Canada should de-activate Uber - Whimsley. Uber CEO Travis Kalanick’s says that his company is engaged in something like an election race in which Uber is the candidate and [its opponent] is an asshole called Taxi. 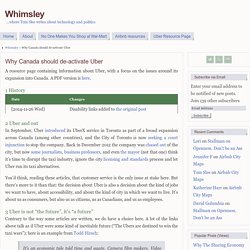 I’m not totally comfortable with it but we have to bring out the truth of how evil Taxi is. Kalanick also referred to “Our opponent – the Big Taxi cartel” when he hired former Obama strategist David Plouffe to run its political lobbying efforts. It’s worth reflecting for a moment on the fact that cities all around the world, with many different political and economic traditions, have decided independently that taxis need some regulation; and there is no “Big Taxi cartel” coordinating these decisions. Taxi firms are generally city-wide, at least until Uber itself came along.

Cities have had their own reasons for regulating taxis. It is not a coincidence that, all around the world, taxi regulation happens at the city level rather than at a national or provincial level. A Quick Note on Airbnb’s San Francisco Report - Whimsley. A bad-tempered post, for reasons that will become apparent. 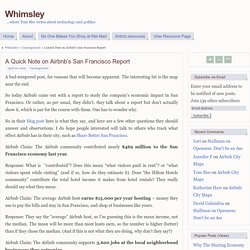 The interesting bit is the map near the end. So today Airbnb came out with a report to study the company’s economic impact in San Francisco. Wonolo, Temp Worker App, Shows Scary Future of Sharing Economy. AirBnB-Final. Policymaking for the Sharing Economy: Beyond Whack-A-Mole. Across the economy, informal and lightly-regulated marketplaces are emerging that directly connect individuals and small businesses. 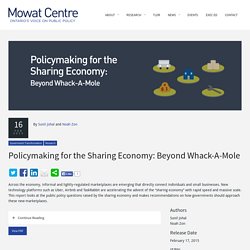 New technology platforms such as Uber, Airbnb and TaskRabbit are accelerating the advent of the “sharing economy” with rapid speed and massive scale. This report looks at the public policy questions raised by the sharing economy and makes recommendations on how governments should approach these new marketplaces. Continue Reading. Airbnb and Uber are here, and they’re growing. It’s time for policymakers to catch up. Part of the answer lies in the way the sharing economy operates. 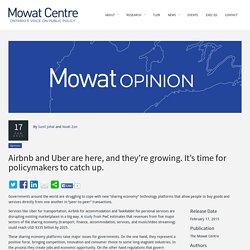 Think Outside the Boss. The Festival of Labor © Chrysti | Flickr Thank you very much to the committee for this invitation to deliver the 8th Annual Eric N Schocket Memorial Lecture on Class and Culture, and thank you especially to Professor Christoph Cox for setting it all up! The sharing economy is bullsh!t. Here’s how we can take it back. The sharing economy is bullshit. David Graeber: ‘So many people spend their working lives doing jobs they think are unnecessary’ A few years ago David Graeber’s mother had a series of strokes.

Social workers advised him that, in order to pay for the home care she needed, he should apply for Medicaid, the US government health insurance programme for people on low incomes. Untitled. Examples of Food Services Collectives. Katarzyna Gajewska - Independent Scholar. The Sharing Economy - Home.