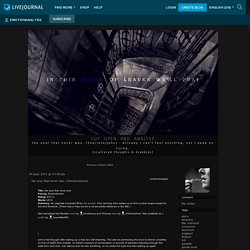 One morning John wakes up to find London empty except for him and Sherlock. (There may or may not be a not-so-subtle reference in the title.) Also translated into Russian here by kinoksana and Chinese here by. My Life As A Dog - LiquidFix - Sherlock (TV. Sherlock never paid the bills, even the ones he had agreed to cover when John had moved into Baker Street. 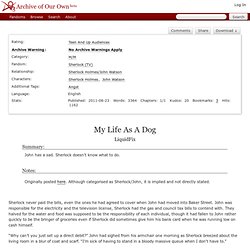 John was responsible for the electricity and the television license, Sherlock had the gas and council tax bills to contend with. They halved for the water and food was supposed to be the responsibility of each individual, though it had fallen to John rather quickly to be the bringer of groceries even if Sherlock did sometimes give him his bank card when he was running low on cash himself.

“Why can’t you just set up a direct debit?” John had sighed from his armchair one morning as Sherlock breezed about the living room in a blur of coat and scarf. “I’m sick of having to stand in a bloody massive queue when I don‘t have to.” John - Findingthestars - Sherlock (TV), Sherlock Holmes & Related Fandoms. He had been beneath one of the many tunnels that were the only home to his network of homeless children and teens. 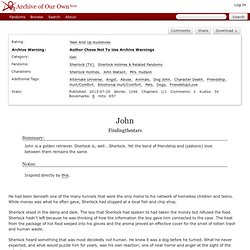 While money was what he often gave, Sherlock had stopped at a local fish and chip shop. Sherlock stood in the damp and dark. The boy that Sherlock had spoken to had taken the money but refused the food. Sherlock hadn't left because he was thinking of how the information the boy gave him connected to the case. In Pieces - belovedmuerto - Sherlock. It is cold in the flat, and he is alone. 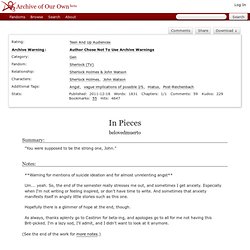 He is always alone now, even when he is not. Even when his ghost is all around, John knows that he is alone. Reaction - Chapter 1 - Blind_Author - Sherlock. Black - momotastic - Sherlock. It’s dark outside. 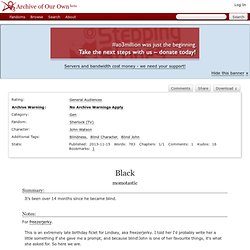 Not that it matters to him anymore. It’s always dark nowadays. John turns over onto his right side. He has been tossing and turning for hours now, thinking about the accident, about his life since then. Red Balloon - edy - Sherlock. Walled Garden - CactusWren - Sherlock. The room is full of things. 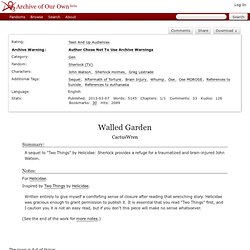 Once John Watson's room had nothing in it. A bed, a sink, a toilet; a light, not his to control; nothing more. This room has things, so many things – comfortable chairs, two of them. A table, with other chairs at it. A television. One of the chairs has a cushion, with a pattern in blue and red. Windows. There's another door, and a tall man with curly black hair comes through it. There's another man with him today. 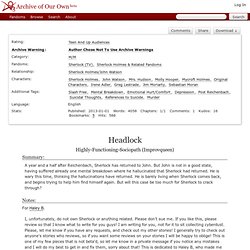 Everyone said it was different this time, but it wasn’t. They were lying, and John knew it, playing along with the crazy scheme. John sat on his sofa, staring at the man standing by the window, looking out onto the street below. His soft brown curls were the exact shade John had memorized, his stance and posture perfect. A Silent Withdrawal - Ruyu - Sherlock. The Memory Palace of John Hamish Watson - mid0nz - Sherlock. Inside the Mind - MyLittleCornerOfSherlock - Sherlock (TV), Sherlock Holmes & Related Fandoms. He holds his head in his hands, a brutal headache pounding against the already battered walls of his mind. 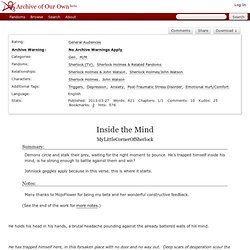 He has trapped himself here, in this forsaken place with no door and no way out. Deep scars of desperation scour the round walls. Black scorch marks of empty loneliness spatter the room like a Jackson Pollock painting. Very little light filters through tenuous windows of hope. Don't Forget to Remember Me - littlemisshamish - Sherlock (TV) “John.” 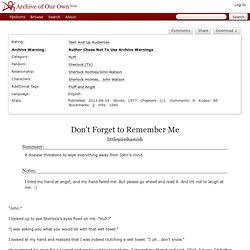 I looked up to see Sherlock’s eyes fixed on me. “Huh?” “I was asking you what you would do with that wet towel.” I looked at my hand and realized that I was indeed clutching a wet towel. “I uh.. don’t know.” Wrong End of the Gun - ASongofSixpence - Sherlock. "There was a gun in the drawer of the desk. 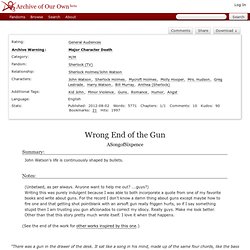 It sat like a song in his mind, made up of the same four chords, like the bass guitar line had got stuck there. " -I Am the Messenger, Markus Zusak. Two Things - Chapter 1 - Helicidae - Sherlock. Just Desserts - Chapter 1 - NoirRosaleen - Sherlock. Chapter Text "Oh my god, what IS that?! " John didn't even blink, just kept looking for the tea he liked on the shelf in front of him. This was beyond old now - when it had first started, it had hurt, and then eventually it just made him tired, and by now it barely pinged on his awareness. The scars he'd gotten from the Pool Incident (as he called it in his head) were certainly startling, but the reactions of certain others simply baffled him at this point. He'd seen horrific damage in Afghanistan - people you could hardly believe were still alive - and it had never caused him the terror and disgust others now exhibited at the sight of him, just pity and a certain queasiness that people could hurt each other like that, even accidentally.

"Jesus, how can that thing go out in public? John froze for a second in the act of reaching for the box of tea, then made himself continue the motion. There was a sound of a digital camera, the sound byte of a click. "Ew, did you see that? Heartbeat, a sherlock fanfic. Heartbeat Author's Note: Hello! I am alive! Sorry to all my Klainers who might be getting this alert and getting angry at me for not posting a Klaine story in a while. Don't worry, I could never leave those boys behind; my babies (FIANCES) will get quite a few more stories. But not today. Disclaimer: I don't own BBC's Sherlock or any of the characters. John Watson used to dream about the war. Now he dreams of piercing blue eyes, musician hands delicately caressing the strings of a violin, a worn bathrobe draped over thin shoulders, and a voice like velvet rumbling in the darkness. John Watson has never known loneliness to hurt so much. Sherlock's suicide broke something inside of him and he wasn't sure if he could ever be repaired.

Nothing New - aspermoth - Sherlock. Scars were nothing new to John. They were like old friends, like brothers in arms, familiar, intimate: he had a veritable list of what, where, when and how he got this one, that one, those ones. A thin line of scar, almost invisible, on the right-hand side of his abdomen: ruptured appendix removed at four years old. A long rough line across his forehead at the hairline: split his head open when he fell out of a tree on his twelfth birthday. A short, thick line on his left thumb: accident with a chisel whilst doing carpentry at school, aged fourteen. Three near identical scars stacked on top of each other on his left arm: burnt himself with the iron numerous times in his early twenties.

Safe and Sound, a sherlock fanfic. So, I based this off of a YouTube video that you guys can find here: watch? V=o6D_f8NI4_s I woke up gasping, heart pounding in my chest as a thin sheen of sweat began to coat my skin. You Paid Me Well In Memories, a sherlock fanfic. For my friend laureleaf, I hope this makes up for being late on your birthday and is all you ever expected. Disclaimer: I do not own Sherlock, I'm just visiting around with them. Cover created by Allison Rose. John Watson sighed as he looked at the grey clouds floating threateningly above him. He pulled the warm black coat that hung loosely off his thin frame closer to him, as if it were the only comfort he had in the world. He tried to ignore the soft drops that began to fall around him. It would rain on his birthday. John slowly limped up the hill to the cemetery, the light snow softly crunching under his feet. "Hello, John, it's good to see you. He looked older than John had ever seen him as he handed John the black umbrella.

Forgivable, a sherlock fanfic. One More Miracle Chapter 1, a sherlock fanfic. This is a post-RBF fiction. One more of dozens, I'm sure, but hopefully it will keep you entertained. I have done the best I can to be accurate with my use of British colloquialisms and spelling, but I am a Yank, so please forgive any glaring mistakes.