Guest Blogger Starling: Schrödinger’s Rapist: or a guy’s guide to approaching strange women without being maced. Phaedra Starling is the pen name of a romance novelist and licensed private investigator living in small New York City apartment with two large dogs. She practices Brazilian jiu-jitsu and makes world-class apricot muffins. Gentlemen. Thank you for reading. Let me start out by assuring you that I understand you are a good sort of person. You are kind to children and animals. So far, so good. Now, you want to become acquainted with a woman you see in public.

“But wait! Well, no. So when you, a stranger, approach me, I have to ask myself: Will this man rape me? The Most Sexist Man Ever? Last updated 05:12 03/12/2013 OPINION: What's a nice guy to do when the woman he married doesn't act like a compliant domestic sex slave?

It's a problem that has preoccupied father of three and self-proclaimed 'marriage alchemist' Kevin Crawford - and now he's shared the answer in The Sibelius Sequence: How To Lovingly Hack Your Wife's Emotional Operating System So You Can Enjoy "Happy Wife, Happy Life" On Autopilot. The marriage alchemist knows a thing or two about women. After all, he married one. 'After the "honeymoon glow" wore off, her true colours came out,' he explains in his promotional material. The Missing Stair Part Two: The Creeper and the Excuser. Trigger Warning for Rape and Sexual Harassment Let’s talk some more about the Pervocracy’s Missing Stair post: I gave almost no details about the guy except “he’s a rapist,” I immediately got several emails from other members of that community saying “oh, you must mean X.” 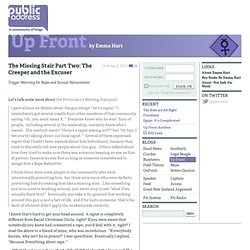 Everyone knew who he was! Tons of people, including several in the leadership, instantly knew who I meant. #322 & #323 “My friend group has a case of the Creepy Dude. How do we clear that up?” Here is Letter #322. 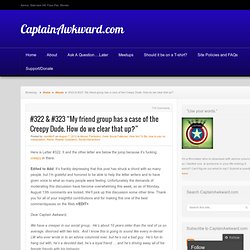 It and the other letter are below the jump because it’s fucking creepy in there. Edited to Add: It’s frankly depressing that this post has struck a chord with so many people, but I’m grateful and honored to be able to help the letter writers and to have given voice to what so many people were feeling. Unfortunately the demands of moderating this discussion have become overwhelming this week, so as of Monday, August 13th comments are locked. We’ll pick up this discussion some other time. Thank you for all of your insightful contributions and for making this one of the best commentspaces on the Web. We have a creeper in our social group. He’s mostly been concentrating on the other women: telling them to expose themselves, telling them their skirts weren’t flying high enough while they were dancing, hitting on them when he knows they have boyfriends. I want to punch him. Something needs to happen here, obviously, but I have no idea what.

And here is Letter #323. Signed, Deadspin. What a wonderful article! 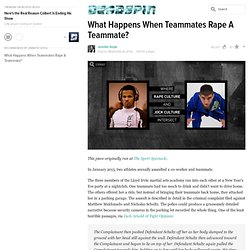 I think the military could learn a few things from your assessment of the football-culture problem: Sexual violence between members of the same community is engineered to either expel the victim from that community, or to make her sexual subjection a condition of her membership. I think the violation of trust & respect is the saddest part of it, for me. Four Corners - 11/05/2009: Program Transcript. Read the program transcript of Sarah Ferguson's report "Code of Silence", first broadcast 11 May 2009 on ABC1. 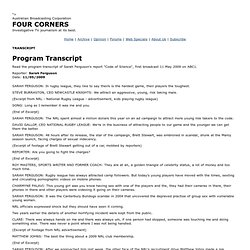 Reporter: Sarah Ferguson Date: 11/05/2009 SARAH FERGUSON: In rugby league, they like to say theirs is the hardest game, their players the toughest. STEVE BURRASTON, CEO NEWCASTLE KNIGHTS: We attract an aggressive, young, risk taking male. (Excerpt from NRL - National Rugby League - advertisement, kids playing rugby league) SONG: Long as I remember it was me and you. (End of Excerpt) SARAH FERGUSON: The NRL spent almost a million dollars this year on an ad campaign to attract more young risk takers to the code. 'Keeping Legs Together' Doesn't Stop Rape. Last updated 11:52 15/11/2013 In the latest news to come out of Rape Culture Weekly - The Ongoing WTF Files, a lawyer has defended his client against charges of rape by arguing that the victim 'could have closed her legs' if she didn't want to have sex. 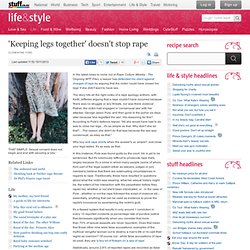 The story hits all the right notes of a rape apology anthem, with Keith Jefferies arguing that a rape couldn't have occurred because 'there was no struggle or any threats, nor was there violence'. Rather, the victim had engaged in 'consensual sex' with her attacker, George Jason Pule, and then gone to the police six days later because 'she regretted the sex'.