Fusion research in Australia. In the second week of January ITER announced that it has achieved two important milestones in the development of the tokamak fusion research reactor: completion of ground insulation for the first of seven central solenoid production modules in the US and that the first toroidal field coil passed all fitting tests in Japan. 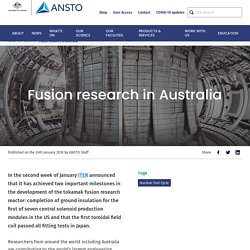 Researchers from around the world including Australia are contributing to the world’s largest engineering project to create fusion energy in France, which is now 50 per cent complete. Australia’s involvement was formalised late in 2016 with ANSTO signing a cooperation agreement on behalf of the country. In a first for a non-member country, the agreement enables Australia to engage with and benefit from participation in the project—essentially sharing ideas and delivering solutions to some of the physics and engineering problems of relevance to ITER. 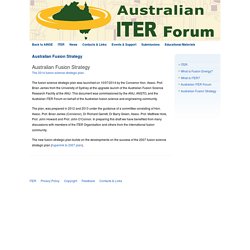 The fusion science strategic plan was launched on 10/07/2014 by the Convenor Hon. Assoc. Prof. Brian James from the University of Sydney at the upgrade launch of the Australian Fusion Science Research Facility at the ANU. Australian Fusion Strategy – Australian ITER Forum. Energy Use and Electricity Generation, Australia, 2017-18 financial year. The scope of the 2014-15 collection consisted of all business entities operating in the Australian economy during 2014-15, except for entities classified to ANZSIC subdivisions: 01 Agriculture 62 Finance 63 Insurance and superannuation funds 96 Private households employing staff Unlike the 2014-15 collection, the scope for the 2017-18 collection only consists of businesses operating in select energy intensive industries, i.e. entities classified to ANZSIC divisions: 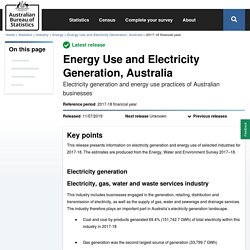 Nuclear power in Australia: A comparative analysis of public opinion regarding climate change and the Fukushima disaster. Highlights Australia-wide survey assessed opinions of nuclear power in 2010 and 2012. 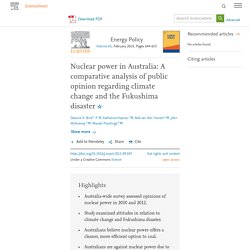 Study examined attitudes in relation to climate change and Fukushima disaster. 21.8: Nuclear Fusion. Learning Objectives Describe the nuclear reactions in a nuclear fusion reaction Quantify the energy released or absorbed in a fusion reaction The process of converting very light nuclei into heavier nuclei is also accompanied by the conversion of mass into large amounts of energy, a process called fusion. 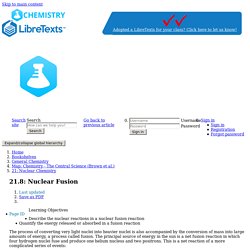 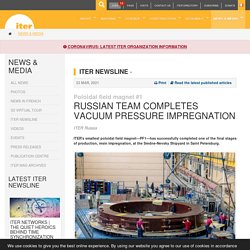 The 200-tonne PF1 magnet assembly has successfully undergone vacuum pressure impregnation. Fusion. What is Fusion? Fusion is the process that powers the sun and the stars. 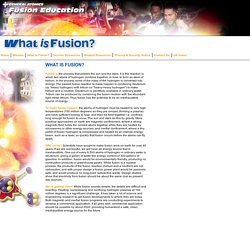 It is the reaction in which two atoms of hydrogen combine together, or fuse, to form an atom of helium. In the process some of the mass of the hydrogen is converted into energy. The easiest fusion reaction to make happen is combining deuterium (or “heavy hydrogen) with tritium (or “heavy-heavy hydrogen”) to make helium and a neutron. Tokamak. How does it work? 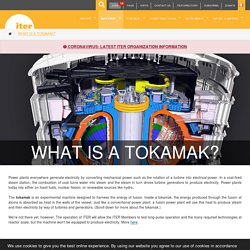 The heart of a tokamak is its doughnut-shaped vacuum chamber. Inside, under the influence of extreme heat and pressure, gaseous hydrogen fuel becomes a plasma—a hot, electrically charged gas. DOE Explains...Tokamaks. You are here Home » DOE Explains...Tokamaks Basic tokamak components include the toroidal field coils (in blue), the central solenoid (in green), and poloidal field coils (in grey). 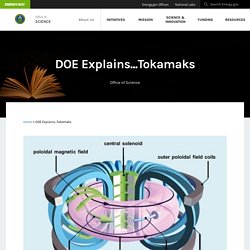 The total magnetic field (in black) around the torus confines the path of travel of the charged plasma particles. Nuclear Fusion Basics. Fusion, a form of nuclear energy generated when light-weight atoms fuse, is the process at work in every star´s core, releasing an enormous amount of energy. 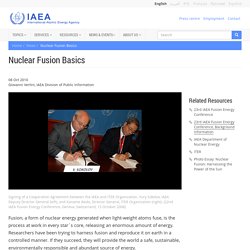 Researchers have been trying to harness fusion and reproduce it on earth in a controlled manner. If they succeed, they will provide the world a safe, sustainable, environmentally responsible and abundant source of energy. Growing at a slower pace, world population is expected to reach 9.7 billion in 2050 and could peak at nearly 11 billion around 2100. The world’s population is expected to increase by 2 billion persons in the next 30 years, from 7.7 billion currently to 9.7 billion in 2050, according to a new United Nations report launched today. The World Population Prospects 2019: Highlights, which is published by the Population Division of the UN Department of Economic and Social Affairs, provides a comprehensive overview of global demographic patterns and prospects. The study concluded that the world’s population could reach its peak around the end of the current century, at a level of nearly 11 billion.

The report also confirmed that the world’s population is growing older due to increasing life expectancy and falling fertility levels, and that the number of countries experiencing a reduction in population size is growing. The world’s population continues to increase, but growth rates vary greatly across regions The population of sub-Saharan Africa is projected to double by 2050 (99% increase). Department of Industry, Science, Energy and Resources.

Department of Industry, Science, Energy and Resources. External Heating Systems. Advantages of fusion. Sustainability, abundant fuels, no long-lived waste ... a number of advantages make fusion worth pursuing. (An artist's impression of the European fusion power plant design. © EUROfusion) The next decades are crucially important to putting the world on a path of reduced greenhouse gas emissions. By the end of the century, demand for energy will have tripled under the combined pressure of population growth, increased urbanization and expanding access to electricity in developing countries. The ITER Agreement. The launch of an international effort on fusion: US President Reagan and General Secretary Gorbachev of the Soviet Union at the Geneva Superpower Summit (1985). Nearly 30 years ago, a group of industrial nations agreed on a project to develop a new, cleaner and more sustainable source of energy.

ITER was set in motion at the Geneva Superpower Summit in November 1985, when the idea of a collaborative international project to develop fusion energy for peaceful purposes was proposed by General Secretary Gorbachev of the former Soviet Union to US President Ronald Reagan. What is Fusion? Mass, Energy, and the Theory of Relativity.

Learning Objectives By the end of this section, you will be able to: Explain how matter can be converted into energyDescribe the particles that make up atomsDescribe the nucleus of an atomUnderstand the nuclear forces that hold atoms togetherTrace the nuclear reactions in the solar interior. Mass, Energy, and the Theory of Relativity. Advantages of fusion. DOE Explains...Plasma Confinement. You are here Home » DOE Explains...Plasma Confinement Image of the inside of a magnetic confinement experiment during plasma discharge. Plasma confinement refers to the containment of a plasma by various forces at the extreme conditions necessary for thermonuclear fusion reactions.

These conditions exist naturally in stars, where they are sustained by the force of gravity. In the laboratory, researchers use strong magnetic fields to confine plasma. DOE Explains...Tokamaks. Nuclear fusion is 'a question of when, not if' ITER Celebrates Milestone, Still at Least a Decade Away From Fusing Atoms. Safety and Environment. Fusion Energy Is Coming, and Maybe Sooner Than You Think. Assembly. What is ITER?