HISTORY OF THE PAPACY. Bishops of Rome: from the 1st century AD The pope is the bishop of Rome. 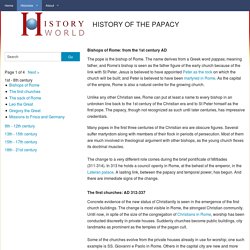 The name derives from a Greek word pappas, meaning father, and Rome's bishop is seen as the father figure of the early church because of the link with St Peter. Jesus is believed to have appointed Peter as the rock on which the church will be built; and Peter is believed to have been martyred in Rome. Christian History. Castel Gandolfo: History of the Summer Residence of the Pope. In the late evening of Aug. 6, 1978, a heavy iron chain was pulled across the door of the papal summer palace. 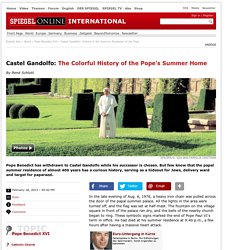 All the lights in the area were turned off, and the flag was set at half-mast. The fountain on the village square in front of the palace ran dry, and the bells of the nearby church began to ring. These symbolic signs marked the end of Pope Paul VI's term in office. He had died at his summer residence at 9:40 p.m., a few hours after having a massive heart attack. Pope Francis makes scathing critique of Vatican officials in Curia speech. Pope Francis has ended the year with a scathing critique of the church’s highest-ranking officials, including a list of 15 “ailments” that he said plagued the Vatican’s power-hungry bureaucracy. 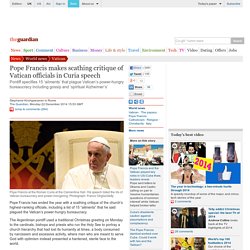 The Argentinian pontiff used a traditional Christmas greeting on Monday to the cardinals, bishops and priests who run the Holy See to portray a church hierarchy that had lost its humanity at times, a body consumed by narcissism and excessive activity, where men who are meant to serve God with optimism instead presented a hardened, sterile face to the world. The 78-year-old pope’s second Christmas speech since his election in 2013 was met by tepid applause among his Vatican audience, according to the Associated Press, and just a few smiling faces. 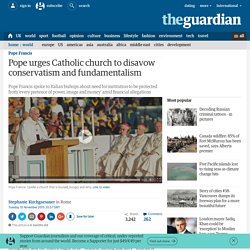 The sweeping remarks before an audience of Italian bishops at a conference in Florence were a stark reminder of the way in which Pope Francis is trying to shake up a church that in many ways is losing relevance around the world, and continues to be battered by allegations of financial mismanagement and greed at the heart of the Vatican. “Before the problems of the church it is not useful to search for solutions in conservatism or fundamentalism, in the restoration of obsolete conduct and forms that no longer have the capacity of being significant culturally,” the pope said. “Christian doctrine is not a closed system incapable of generating questions, doubts, interrogatives. Pope Francis asks Protestants to forgive Catholics for persecution. Orthodox Metropolitan Gennadios of Italy, Pope Francis and Anglican Archbishop David Moxon, the archbishop of Canterbury's representative to the Vatican, give a blessing at the end of a prayer service at the Basilica of St Paul Outside the Walls (CNS) The Pope spoke at a prayer service concluding the Week of Prayer for Christian Unity After walking across the threshold of the Holy Door of the Basilica of St Paul Outside the Walls with an Orthodox metropolitan and an Anglican archbishop, Pope Francis invoked God’s mercy upon divided Christians and apologised for times that Catholics may have hurt members of other denominations. 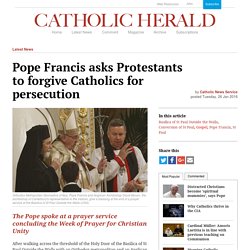 John Paul II on Religious Freedom and the Church's Mission. All forms of missionary activity are marked by an awareness that one is furthering human freedom by proclaiming Jesus Christ. [...] 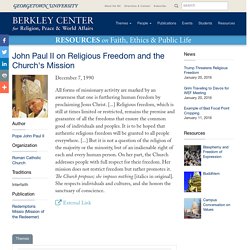 Religious freedom, which is still at times limited or restricted, remains the premise and guarantee of all the freedoms that ensure the common good of individuals and peoples. It is to be hoped that authentic religious freedom will be granted to all people everywhere. [...] But it is not a question of the religion of the majority or the minority, but of an inalienable right of each and every human person.

On her part, the Church addresses people with full respect for their freedom. Her mission does not restrict freedom but rather promotes it. To understand Pope Francis, look to the Jesuits. Figuring out why Pope Francis has upended so many expectations, how exactly he's changed the Catholic church in his first year and what he might be contemplating for the future has become a Catholic parlor game that is almost as popular as the pontiff himself. 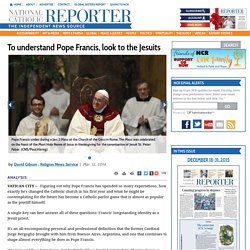 A single key can best answer all of these questions: Francis' longstanding identity as a Jesuit priest. It's an all-encompassing personal and professional definition that the former Cardinal Jorge Bergoglio brought with him from Buenos Aires, Argentina, and one that continues to shape almost everything he does as Pope Francis. "He may act like a Franciscan, but he thinks like a Jesuit," quipped Fr. Thomas Reese, a fellow Jesuit who is a columnist for National Catholic Reporter.

In fact, it would be easy to mistake this new pope for a Franciscan, given his emphasis on helping society's outcasts and his decision to become the first pope to take the name of St. "We never imagined that a Jesuit could become pope. Pope Francis: US bishops show 'courage' over Catholic church sex abuse crisis. Pope Francis has hailed US bishops for their handling of the sexual abuse crisis that has rocked the Catholic church for decades, saying they had shown “courage” throughout and regained the authority and the trust which was demanded of them. 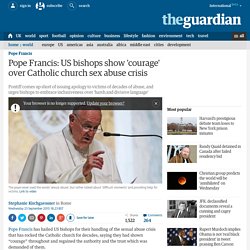 In rare remarks about the string of scandals that first emerged in the mid-1980s, Pope Francis stopped short of addressing the victims of clerical abuse, focusing instead on the pain that had been inflicted on the bishops who were left to weather the storm. “I am also conscious of the courage with which you have faced difficult moments in the recent history of the church in this country without fear of self-criticism and at the cost of mortification and great sacrifice,” he said. He then commended the bishops for being ready to sell off church property and assets in order to pay for settlements with abuse victims. “We’re sad that Francis claims US bishops have shown ‘courage’ in the abuse crisis. Above all, he argued that dialogue was “our method”. Pope Pens Letter to Gay Catholics. Pope Francis is continuing his informal outreach to gay and lesbian Catholics (hat tip, Daily Dish), and, despite his apparent comfort with modern social media and its dizzying gadgetry, he is apparently still happy to make use of old-school communication tools. 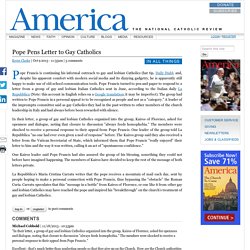 Pope Francis turned to pen and paper to respond to a letter from a group of gay and lesbian Italian Catholics sent in June, according to the Italian daily La Repubblica (Note: this account in English relies on a Google translation; it may be imperfect). The group had written to Pope Francis in a personal appeal to to be recognized as people and not as a "category. " A leader of the impromptu committee said as gay Catholics they had in the past written to other members of the church leadership in Italy and had always before been rewarded with silence. One Kairos leader said Pope Francis had also assured the group of his blessing, something they could not before have imagined happening. Pope grants indulgence for Perpetual Help icon veneration. Historical Overview of the Inquisition. How to Address the Pope: 11 Steps. 教宗預言退位 「只想好好吃披薩」 b09a00_p_04_02. 教宗：我的任期不長了. Pope Francis Predicts Short Papacy, Announces Jubilee Year Of Mercy.

VATICAN CITY (AP) - Pope Francis on Friday marked the second anniversary of his surprise election by predicting that he won't be pope for long - and by calling a special Jubilee Year to focus the church on his top priority while he's still around: mercy. 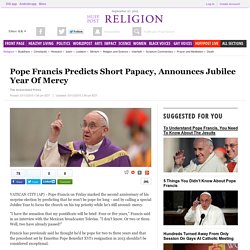 "I have the sensation that my pontificate will be brief: Four or five years," Francis said in an interview with the Mexican broadcaster Televisa. "I don't know. Or two or three. Well, two have already passed! " Francis has previously said he thought he'd be pope for two to three years and that the precedent set by Emeritus Pope Benedict XVI's resignation in 2013 shouldn't be considered exceptional. Francis also said he didn't dislike being pope but that what he really missed was his freedom. "The only thing I'd like to do is to be able to go out one day without anyone recognizing me and go get a pizza," he said, laughing. Pope Francis: US bishops show 'courage' over Catholic church sex abuse crisis. The Plain Truth: Something's Fishy - Or Where Did that Pope's Hat Come From ?

. (1) the entire body of bishops in union with the pope, the bishop of Rome, when it teaches with moral unanimity; (2) an ecumenical council that receives papal approval; and (3) under certain conditions, the pope alone. Pope Francis has 99 problems and they are all his pellegrina. A gust of wind blows Pope Francis’s mantle during his weekly general audience in St. Peter’s Square at the Vatican on Wednesday. (Alessandra Tarant/Associated Press) FAST FACTS: What Pope Francis wears.

FRANCIS THE WORKER. Pope Francis teaches the value of work because he himself worked before he entered the priesthood. File photo from EPA MANILA, Philippines – Popes elected to the Vatican have followed certain traditions that have been passed on and observed through the years. While some popes managed to follow the prescribed attire and decorations, others paved the way for slight deviations. Latest NEWS about 方濟各. Nihil Obstat » Blog Archive » Pope Francis Does Cardinal Burke a Favor.

英國四百多位神父聯署要求主教會議堅持教會訓導. 英國有逾五百名教友聯署，支持早前由約四百六十名神父發出的公開信，要求出席年內以家庭為題的世界主教會議的神長，在婚姻及性方面的議題上，發表「清晰而肯定」的教會訓導。 那封由神父聯署的公開信三月廿四日在《天主教先鋒報》刊登，隨即在當地教會及天主教博客圈引起轟動。 這些神父感覺到教友們在去年的主教會議後感到困惑，故希望「重申我們堅定不移忠於有關婚姻及人類性愛真正意義的傳統教義，就是建基於天主聖言和教會兩千年傳承的教義」。 Pope Francis: ‘Family Synod is not a parliament’ Pope Francis meets with young refugees from Syria and Iraq during his trip to Turkey (CNS) Catholic Dioceses of One Spirit. Pastoral Letter on Catholic Church Leadership. Pope Francis Steps Up Campaign on Climate Change, to Conservatives’ Alarm.

Photo. Untitled. » 03/17/2015VATICANPope: the Church is "Jesus' home" whose doors are always open which the Christian community cannot close How many times today, someone who has made a mistake but decides "to go" finds the doors to Christian communities closed. "But you cannot, no, you cannot [come in]. You have sinned and you cannot [come in]. If you want to come, come to Mass on Sunday, but that is it - that is all you can do.' Saints & Sinners: A History of the Popes - Eamon Duffy. Cardinal Raymond Burke. A leading Catholic cardinal at the Vatican has essentially said that complying the with Obama birth control mandate would have Catholics and Catholic organizations participating in sin.The mandate compels religious employers to pay for birth control and drugs that may cause abortions in health coverage for their employees and a revised mandate will compel them to refer employees for free coverage from their health insurance plans, which will eventually have the payment mandate.In an upcoming episode of Catholic Action Insight hosted by Thomas McKenna to air on EWTN on Wednesday, Cardinal Raymond Burke speaks out for the first time on the controversial mandate.

"How much loneliness, how much suffering, how much distance from God in many suburbs of Europe and America, and in many cities of Asia. " Vatican City (AsiaNews) - "If we do not want stagnant water" in the Church, then we "must move from a pastoral ministry of mere conservation to a decidedly missionary pastoral ministry", which is what the Neocatechumenal Way has been doing "for years".