Shaders for Coloured Water or liquid. Shaders for Coloured Water or liquid hey i'm working on a fluid particle simulation where i need the fluid to be coloured red or orange like an Ink.. i.e a bit transparent and yet retaining the colour and water type look….right now i have a normal “Basic Liquid” shader on it, which i guess, is over-riding the colour info, this is making it look worse that some sort of clay(..my renders are not showing any transparency in the material) Any help will be greatly appreciated..thanks. 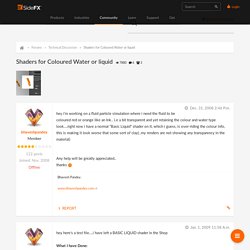 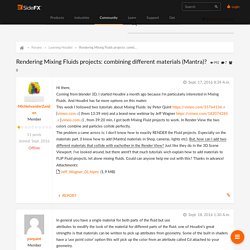 Much appreciated! Unfortunately I didnt get it to work… yet. I followed your example of splitting particlefluidsurface in two, by adding Delete nodes with differences in $VELOCITY Filter Expressions. ( [vimeo.com] from 16:22 min.The problem I come across here, is that the particlefluidsurface nodes looks diffent in the tutorial video: I only have tab called ‘Parameters’ with ‘Surfacing’ ‘Filtering’ and ‘Regions’, so I'm missing the ‘ATTRIBUTES’ (v Cd) tab you are using in the tutorial. Maybe a difference in Houdini 12 and Houdini 15?

I thought maybe the Basic Liquid is part of the problem too. Your last suggestion of separating Fluid Particles into two different objects. Also in the Jeff Wagner webinar i'm stuck on the render/Mantra part.My ultimate goal is to render an animation, of 2-3 emitted fluids falling down, colliding with eachother in different colors. My project till so far in the attachment. Happy to hear, thanks in advance! FLIP Fluid Viscosity. Melting Object. Tutorial 25 - Houdini Lava Like a Boss (Part 1) FX-TD.com. I presented some Flip and Point Advection stuff at the March 2014 Vancouver Houdini User Group. 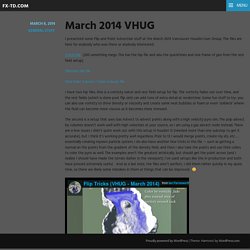 The files are here for anybody who was there or anybody interested: VHUG file (200 something megs. This has the hip file and also the quicktimes and one frame of geo from the rest field setup) Fliptricks hip file Pyro Point Advect / Color Volume file I have two hip files. The second is a setup that uses Gas Advect to advect points along with a high velocity pyro sim.

Flip Tricks (VHUG – March 2014) from Ian Farnsworth on Vimeo. FX-TD.com. Velocity pass render from flip fluids. FLIP Fluid - Mantra Velocity Mesh Pass. Mikkelm2, on 27 Jan 2015 - 10:55 AM, said: - I'm not sure if i'm using this pass correctly, but i basicly just made it black/white and used screen or add mode. - I still don't understand the .hip file 100%, it looks like a basic flip setup with "v" added as an extra image plane.- I can't seem to find the velocity export in the shader/shop? 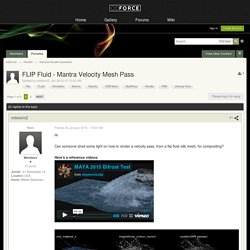 1) Just converting the vector value to grayscale is not right. You need to calculate the length of the vector represented by the velocity buffer, and use that. For some pixels the simple grayscale might be close, but if the velocity vector is e.g. (-1.0, -1.0, -1.0) it will surely fail. You can either do the length calculation in the shader, or probably within your compositing software. 2&3) the "magic" in Marty's hip is the lone parameter node within the flipfluid material node. Attached is a small modification to Marty's file, doing the above mentioned velocity->speed calculation within the flipfluid material.

How to use vorticity attribute as point color in Flip? Flip fluid vorticity. Vorticity for particles. Velocity and vorticity pass from FLIP surface and more. How? I have a file which might help a bit: Vorticity can actually be computed quite easily post-sim with a few vdb nodes to measure curl from the vel field and then length of curl, which is vorticity. 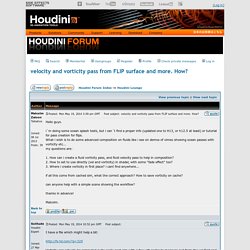 You can put that back onto the particles using an attrib from volume and use those attributes to drive the shader and/or color (I have a vop setup for that in my file) I have a different setup in my file for doing vorticity, where it does it in the flip sim. It tracks with the particles and fades out over time, so if an area gets foamy, the particles will stay foamy for a bit before going back to normal.

Either way is fine, I prefer having it follow along with the particles a bit, as opposed to being just a snapshot of current vorticity, but in a lot of cases, vorticity post-sim (like mentioned above) is more than enough and is a lot faster than doing it in the sim like my file. Vorticity for particles. Velocity and vorticity pass from FLIP surface and more. How? How to use vorticity attribute as point color in Flip? Flip fluid vorticity.