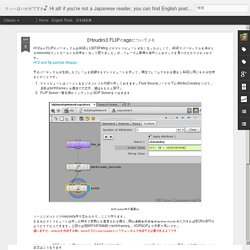 FLIPでパーティクルのAgeを使って消しこみ « Houdini Newbie. Flow map from fluid velocity for game application. Hello everyone, I've seen a couple of post about this but not exactly what I'm looking for. 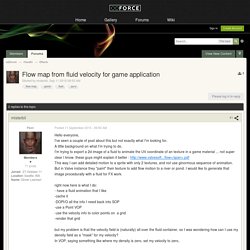 A little background on what I'm trying to do. I'm trying to export a 2d image of a fluid to animate the UV coordinate of an texture in a game material ... not super clear I know, these guys might explain it better : This way I can add detailed motion to a sprite with only 2 textures, and not use ginormous sequence of animation. サルにもわかる Houdini: make objects float. Stiky Flip Fluid. 1) i think you shouldn't use pop solver if you don't use something unique to pops. houdini copies geometry data to particle primitive, process it and then copies back - it's time. and you don't need sdf and vel from sops - you already have collision field (sdf representation of the collision objects), collisionvel field - velocity of the collision objects (set velocity type to Point). add Geometry VOP DOP (something like vop sop + volume vop sop) and sample collision field for every particle - if you closer to 0 than some threshold then sample collision vel and mix (depending on the distance to 0 levelset of the collisionvel field) or just replace v attrib of that particle. 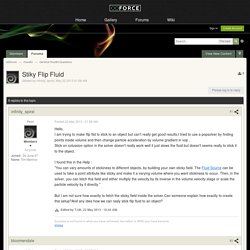 BUT. this won't give you 100% glued particles because there are some other forces, project stage of vel field and some cheats (like moving particles outside of collision objects).. this will change calculated velocities. not in front of the houdini so only bunch of text) but 1) is working 100%) Elastic effect on flip fluids on H12. That setup looks good for strain. 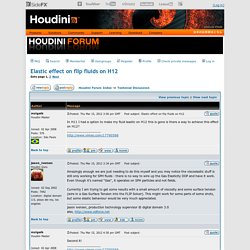 The only big thing missing is the strain isn't being rotated by the velocity field. So if you have a blob that is stretched in X, then rotated 90 degrees, it will still try to restore along the X axis. Gas Velocity Stretch is supposed to fix this, but it is a pretty subtle thing. The Power of the Ocean.

TimeBlendは併用されてますか？ Rnd_textureflow_pt1. In our latest feature movie I have developed a lot of procedural animated water surfaces. 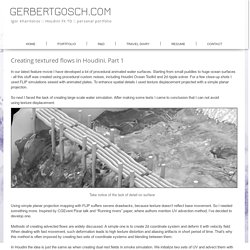 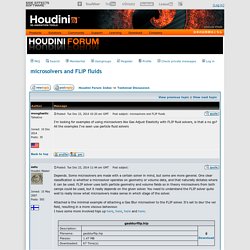 Some microsolvers are made with a certain solver in mind, but some are more general. One clear classification is whether a microsolver operates on geometry or volume data, and that naturally dictates where it can be used. FLIP Fluid - Mantra Velocity Mesh Pass - Page 2 - General Houdini Questions - od. Mikkelm2, on 27 Jan 2015 - 2:08 PM, said: Where in the shader do you add a parameter to call the cooked velocity? 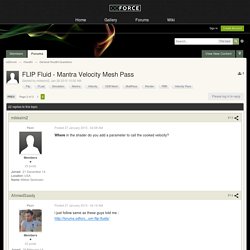 The terminology here can be a bit tricky; v is an attribute on the geometry. The shader needs to bind that attribute to an input variable. This is nowadays done with a Bind VOP, but Parameter VOP performs the needed binding as well. For creating an export variable, usually a Bind Export VOP is used. Marty took advantage of this, and with a single Parameter VOP managed to take care of both import and export of the variable. Static RBD vs Source Volume, Preferred method for Flip Collision? R&D: [Houdini] SDF based collision using custom VOP. VDB for collisions. The Particle collision method doesn't work with SourceVolume collisions (which I'm afraid probably isn't documented.) 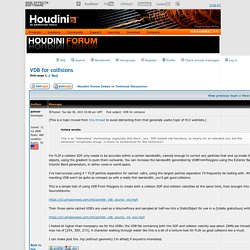 That method uses the DOPs particle/SDF collision detection, which is very accurate and fairly fast, but it only works with DOPs collisions, i.e. when the collision is represented by an actual DOP Object that has its own collision representation; it's not using the collision field at all. With SourceVolume you're directly manipulating the collision field, so there's no DOP object representing the collision. So you have to use Move Outside Collision, which you really should prefer anyway as it's faster and generally yields "smoother" collisions. Stiky Flip Fluid. FLIP, VDB and Collisions. I'm getting nuts with a scene where water is flowing through some tubular/ pipe geometry. 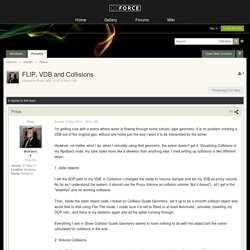 It is no problem creating a VDB out of the original geo, without any holes just the way I want it to be interpreted by the solver. However, no matter what I do, when I simulate using that geometry, the solver doesn't get it. Visualizing Collisions in my flipobject node, my tube looks more like a skeleton than anything else. I tried setting up collisions in two different ways: 1. static objects. 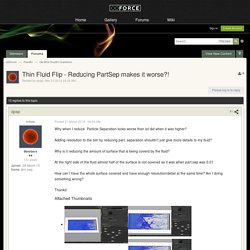 I presumed similar, that it would have a major effect on the simulation, but when I've tested it, setting "None", "Advect" or "Rebuild" all seem to give an identical simulation result. [snip good conjecturing on Update methods]Interesting information about the advection method. I'll have to do some testing to see what effect switching to HJWENO has. It struck me as odd that they wouldn't have selected the most accurate method as default... but then I read the help page and it contained the immortal words "...it will explode" :-P So I guess under certain conditions it isn't quite as stable!

You've pretty much got it right on the Update methods. .: Street Flood :. Quick Gap Fill Method for thin sheets FLIP simulations. Whitewater, foam shading and rendering. Hi guys. Looks like the question never has been asked. I'm a kind of new in da "Houd" and i'm totally amazed by possibilities.

I have a decent bunch of experience years using Maya and i can't believe how big the difference is. That's said, my question is, please, how can i get a decent whitewater foam look? By default, the material applied is the default spray shader but gives me that smoke look. PIC/FLIP Simulator Meshing Pipeline. In my last post, I gave a summary of how the core of my new PIC/FLIP fluid simulator works and gave some thoughts on the process of building OpenVDB into my simulator. In this post I’ll go over the meshing and rendering pipeline I worked out for my simulator.

Two years ago, when my friend Dan Knowlton and I built our semi-Lagrangian fluid simulator, we had an immense amount of trouble with finding a good meshing and rendering solution. We used a standard marching cubes implementation to construct a mesh from the fluid levelset, but the meshes we wound up with had a lot of flickering issues. The flickering was especially apparent when the fluid had to fit inside of solid boundaries, since the liquid-solid interface wouldn’t line up properly.

On top of that, we rendered the fluid using Vray, but relied on a irradiance map + light cache approach that wasn’t very well suited for high motion and large amounts of refractive fluid. Here are some still frames from the same simulation. Code & Visuals. FLIP smorganic/sheeter effect? 薄い液体層を保持可能な粒子ベースの流体表現. Ryoichi Ando. [Japanese] Summary My objective is to establish numerical tools for beautiful physics simulations.

More specifically, I have engaged myself for the past five years in developing new numerical simulation techniques for detailed fluids in the context of computer graphics. My strong passion for design and aesthetics drives me to work on computer graphics. I earned my B.Design, M.Design degrees from the Design department at Kyushu University, where I worked on design-driven projects under the supervision of Reiji Tsuruno, obtaining my Ph.D. in Design in 2014. Making of a Houdini FLIP Explosion. Mixing / advecting Cd in FLIP sim with multiple objects. Hello all. Openvdb for Mtoa. Foam and spray. Borisb2, on 26 Sept 2014 - 12:47 AM, said: but you're saying it would be ok to cache out main sim with substepping of 2 (but as $F4.bgeo), and still use ww-setup with substepping of 1?

Thats what I'm doing at the moment, and for foam and bubbles it looks correct .. just the spray overshoots.. So... turns out the spray overshoot is a bug, and it's been in H13 for a long time. Thank you for complaining loudly enough and providing a good enough test case to force a thorough investigation Just a bit of background, the Whitewater Solver first showed up in H12.5 and was the only thing to use the fledgling POPs in DOPs framework. The problem has been there since H13's release; your case just shows it really well because 1) you have fluid with a high speed leading edge, 2) you've got Timescale set to 0.8, which means time is slightly slowed down in the FLIP and WW solver.

Is there a way to constrain particles to a surface while they are movi - Page 2 - General Houdini Questions - od.

Introduction Video. Valerio Di Napoli: Houdini - UV on particle fluids. Last week I did some research about the techniques to add UVs on particle fluid. Apparently it might seem rather pointless to map a liquid (since the texture will mix by itself and become chaotic in a few moments), but if you have to simulate a viscous liquid, the motion of the particles will be slow and limited, allowing you achieve some nice and slowly "advecting" UVs. First of all, we have to distinguish two main cases: 1. Dynamics has not been simulated yet. In this case, all you have to do is create UVs and transfer the corresponding attribute to the particles in SOP context BEFORE you run the simulation: in this way you'll simulate particles that store UV while advecting and, after the simulation, you'll be able to transfer the uv attribute from particles to the particle fluid surface.

Motion blur VDB volume. Generate millions particles at rendertime. Two ways: In SOPs you can use the Point Replicate SOP to take your tens or hundred of thousands of particles and turn it in to hundreds of thousands or tens of millions. It's surprising how efficient this SOP is and it is all visible in the viewport. There are some nice options such as velocity scaling if you have a vel field around. Don't forget to turn the display of points to pixels as this is a bit more efficient in the viewport in the viewport Display Options.

Just try. Then there is the Point Replicate Mantra Procedural for render time point multiplication. I attached an example file that has a CVEX shader that replicates the Point Replicate SOP. The two go hand in hand. Then use the Point Replicate Procedural to take the large point cloud and add another 10x to 100x multiplier to bump it up to hundreds of millions. Volume Rendering Particles as Liquid Volume - Shaders. Hey,everyone, Nice day here^^ 3D INK. Krakatoa shader. Very awesome. 波の大事な性質 [物理のかぎしっぽ] Getting more volume in flip. Sorry for delay, was busy breaking things at work. I am able to tweak further Jeff's scene to get more details in sim. But let me first answer your questions. More detail to small scale FLIP. .: Houdini 13 Flip wedges :. .: Houdini 13 Flip wedges :.