Major expansion coming to Google’s Firebase app development platform. A Easier Way to Repair the .NET Framework. Having a set of the .NET Frameworks that works correctly is important for all Windows users and developers are no exception. 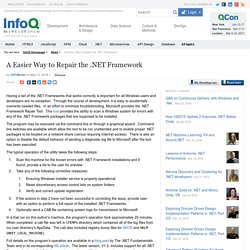 Through the course of development, it is easy to accidentally overwrite needed files. In an effort to minimize troubleshooting, Microsoft provides the .NET Framework Repair Tool. This tool provides the ability to scan a Windows system for errors with any of the .NET Framework packages that are supposed to be installed. The program may be executed via the command line or through a graphical wizard. Command line switches are available which allow the tool to be run unattended and to enable proper .NET packages to be located on a network share (versus requiring Internet access). The typical operation of the utility takes the following steps: Full details on the program’s operation are available in a blog post by The .NET Fundamentals Team and in its corresponding KB article. API Design Tutorial. Having developed API's and components for about 8 years now, some 5-6 years of those open source API's (at the time of writing in 2009), and having used numeral API's developed by others, I have slowly started using a set of guidelines when developing API's. 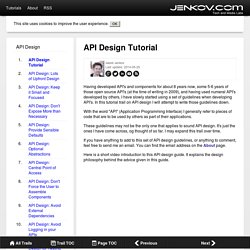 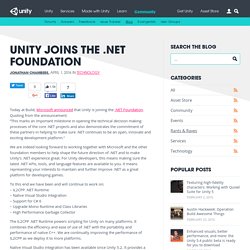 Quoting from the announcement: “This marks an important milestone in opening the technical decision making processes of the core .NET projects and also demonstrates the commitment of these partners in helping to make sure .NET continues to be an open, innovate and exciting development platform.” We are indeed looking forward to working together with Microsoft and the other foundation members to help shape the future direction of .NET and to make Unity’s .NET experience great.

For Unity developers, this means making sure the latest .NET APIs, tools, and language features are available to you. It means representing your interests to maintain and further improve .NET as a great platform for developing games. Android 6.0 Marshmallow update roundup. MVC Framework Introduction. What is MVC? 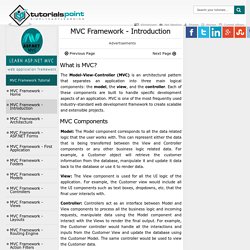 The Model-View-Controller (MVC) is an architectural pattern that separates an application into three main logical components: the model, the view, and the controller. Each of these components are built to handle specific development aspects of an application. MVC is one of the most frequently used industry-standard web development framework to create scalable and extensible projects. MVC Components Model: The Model component corresponds to all the data related logic that the user works with. View: The View component is used for all the UI logic of the application. Controller: Controllers act as an interface between Model and View components to process all the business logic and incoming requests, manipulate data using the Model component and interact with the Views to render the final output.

ASP.NET supports three major development models: Web Pages, Web Forms and MVC (Model View Controller). ASP.NET MVC Features The ASP.NET MVC provides the following features: ASP.NET MVC 5 New Features. Introduction As most of you might already be having some experience with ASP.NET MVC ,let’s have a look into some of the new features introduced with ASP.NET MVC 5.We could have implemented functionality provided by some of these new features in earlier versions of MVC as well but now as these features are a part of the MVC framework using them is easier than ever as there are no configuration changes or external components required.As we discuss the new features we would be refreshing our knowledge of the functionality provided in the prior versions before the introduction of these new features. 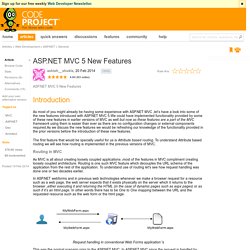 The first feature that would be specially useful for us is Attribute based routing. Google to remove Chrome app launcher on all operating systems - Times of India. NEW DELHI: Google has revealed that it will kill its Chrome app launcher for Windows, Mac and Linux. 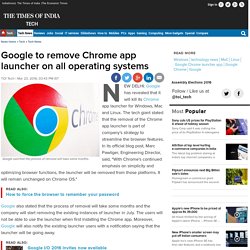 The tech giant stated that the removal of the Chrome app launcher is part of company's strategy to streamline the browser features. In its official blog post, Marc Pawliger, Engineering Director, said, "With Chrome's continued emphasis on simplicity and optimizing browser functions, the launcher will be removed from those platforms. It will remain unchanged on Chrome OS. " Google also stated that the process of removal will take some months and the company will start removing the existing instances of launcher in July.

Responsive Web Design: Fluid Layouts. After focusing on general concepts and how to use fonts responsively in the first two articles of the responsive web design series, let’s delve into fluid layouts. 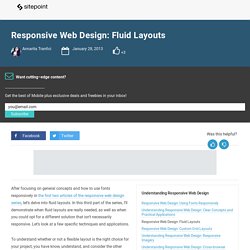 In this third part of the series, I’ll demonstrate when fluid layouts are really needed, as well as when you could opt for a different solution that isn’t necessarily responsive. Let’s look at a few specific techniques and applications. To understand whether or not a flexible layout is the right choice for your project, you have know, understand, and consider the other solutions available. In fact, only by evaluating the strengths and weaknesses of each method will you have the opportunity to validate your layout choice.

How to dynamic one page HTML template to Wordpress theme. 9 Tricks to Design The Perfect HTML Newsletter. An e-mail newsletter is the perfect way to stay in touch with your clients or followers. 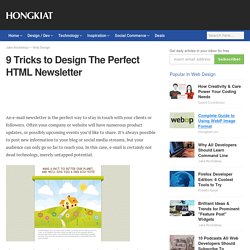 Often your company or website will have numerous product updates, or possibly upcoming events you’d like to share. It’s always possible to post new information to your blog or social media streams, but your audience can only go so far to reach you. ASP.NET. AngularJS — Superheroic JavaScript MVW Framework. 15 Ways to Protect Your Ecommerce Site From Hacking and Fraud. It seems you cannot go a day without hearing about someone or some group hacking a website or stealing credit card and other sensitive data from ecommerce sites. 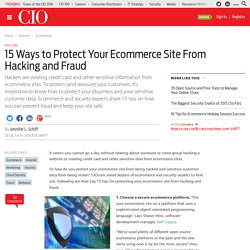 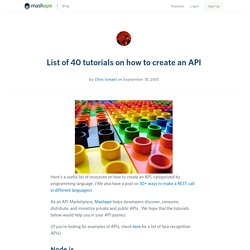 (We also have a post on 30+ ways to make a REST call in different languages) As an API Marketplace, Mashape helps developers discover, consume, distribute, and monetize private and public APIs. We hope that the tutorials below would help you in your API journey. (If you’re looking for examples of APIs, check here for a list of face recognition APIs) Node.js. Android devs using Visual Studio now have an open source option. Android developers who use Microsoft Visual Studio now have more choice.

They can opt for Microsoft's cross-platform toolset or use an Android development add-on recently released as open source. Android++ was released as open source earlier this week under a highly liberal license that allows for commercial use. The major attraction of Android++ is that it's geared toward developers writing Android applications mainly in C/C++ using the Android NDK. 10 tips & tricks every YouTube user should know- The Times of India. Sass vs. LESS. By Chris Coyier On "Which CSS preprocessor language should I choose?

" is a hot topic lately. I've been asked in person several times and an online debate has been popping up every few days it seems. Google Core Algorithm Updates Continue As SEOs Notice Weekend Google Update. YouTube now supports 3D virtual reality video. YouTube now supports 3D virtual reality video, Google has announced. It's not the most surprising announcement in the tech year, admittedly: Google had already embraced virtual reality, 360-degree video and immersive content, after all. This announcement merely brings them all together, and makes it possible to make, share and watch 360 videos that also have depth and three dimensions in the manner of most games and other VR experiences.

"Using the same tricks that we humans use to see the world, VR video gives you a sense of depth as you look around in every direction," Google said in a blog post. The core idea is to give video a sense of true distance and physicality. "Near things look near, far things look far," Google says. The new videos -- which include some custom paid-for 'content' by the likes of TOMS Shoes and the latest Hunger Games movie -- can be seen already via the YouTube Android app, available on Google Play. Marketing Lessons from Google. Android malware steals one-time passcodes.

One-time passcodes, a crucial defense for online banking applications, are being intercepted by a malware program for Android, according to new research from Symantec. The malware, called Android.Bankosy, has been updated to intercept the codes, which are part of so-called two-factor authentication systems. Many online banking applications require a login and password plus a time-sensitive code in order to gain access.

The one-time passcode is sent over SMS but also can be delivered via an automated phone call. 6 Web Design Trends You Must Know for 2015 & 2016. Who can forget the GIFs of the ‘90s, or the more up-to-date focus on flat design? Recently, we’ve seen a surge in popularity of responsive web design, as more and more sites join the drive to become ‘mobile ready’ which is now even more important in the wake of Google’s Mobile Friendly update. Let’s examine some of the most popular for this and the coming year. jQuery Tutorial. jQuery is a fast and concise JavaScript library created by John Resig in 2006. jQuery simplifies HTML document traversing, event handling, animating, and Ajax interactions for Rapid Web Development.

Data analytics on driving behavior help users improve safety and lower insurance rates. Contact Us - Yugtia Technologies India. Google News Lab. Photoshop Tutorials. 15 Hot New Technologies That Will Change Everything. The best Android apps of 2015 – live-streaming video goes mainstream. Let’s be blunt: the vast majority of apps used by the vast majority of smartphone owners were not released for the first time in 2015. Android 6.0.1 Marshmallow beta probably released by mistake for the Galaxy S5. Earlier this week Samsung announced that it was seeking beta testers in South Korea and the United Kingdom, only those who had unlocked variants of the Galaxy S6 and the Galaxy S6 edge could take part in the program to test the Android 6.0 Marshmallow beta firmware. About Us - Yugtia Technologies India. Google rewrites its Angular JavaScript framework.

Angular 2, a re-architected, rewritten version of the popular JavaScript framework also known as AngularJS, goes to a beta release stage today, with general availability planned for early 2016. The upgrade features enhancements for speed in rendering and updating pages, near-initial rendering, and support for building cross-platform native mobile apps for Google Android and Apple iOS. Oracle needs another way into the cloud market. SAN FRANCISCO— The latest quarterly results from Oracle show how the shift to cloud computing is putting a major dent in the software giant’s sales growth and profitability.