Talents & Skills Thesaurus. Hemingway. I Write Like. How to Write a Novel Using the Snowflake Method. Lonely. There are no items for this category lonesome, lonely adj. marked by dejection from being alone; "felt sad and lonely"; "the loneliest night of the week"; "lonesome when her husband is away"; "spent a lonesome hour in the bar" 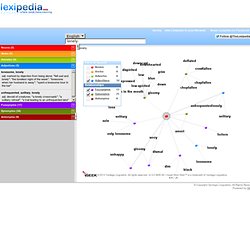 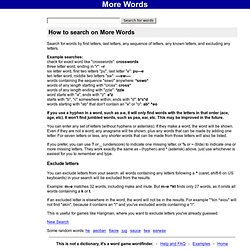 Example searches: check for exact word like "crosswords": crosswords three letter word, ending in "r": --r six letter word, first two letters "pu", last letter "e": pu---e ten letter word, middle two letters "sw": ----sw---- words containing the sequence "sswo" anywhere: *sswo* words of any length starting with "cross": cross* words of any length ending with "zzle": *zzle word starts with "a", ends with "z": a*z starts with "b", "c" somewhere within, ends with "d": b*c*d words starting with "ab" that don't contain an "e" or "o": ab* ^eo If you use a hyphen in a word, such as a-e, it will only find words with the letters in that order (ace, age, etc).

It won't find jumbled words, such as pea, ear, etc. This may be improved in the future. You can enter any set of letters (without hyphens or asterisks). If you prefer, you can use ? Writing. I am your editor. I have been in publishing for over ten years, mostly as an editor. 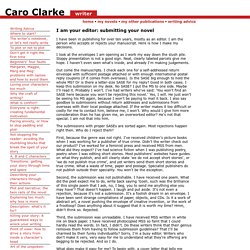 I am the person who accepts or rejects your manuscript. Here is how I make my decisions. I look at the envelopes I am opening as I work my way down the slush pile. Sloppy presentation is not a good sign. Neat, clearly labeled parcels give me hope. Out come the manuscripts. The submissions with proper SASEs are sorted again. First, because the genre was not right. Second, the submission was not publishable. Third, the submission was unreadable. What does make it easy for me? Those still on my desk get their cover letters read in full. I also enjoy the breathy cover letter that explains the psychology of the characters, the themes of the book, and the spiritual depths of the author: 'This is a sensitive, brilliant, yet deep-felt novel exploring what it means to open yourself to the love that flows through the universe. 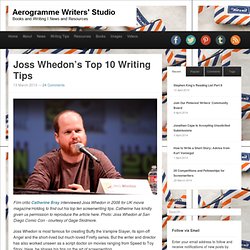 Catherine has kindly given us permission to reproduce the article here. Photo: Joss Whedon at San Diego Comic Con - courtesy of Gage Skidmore. Joss Whedon is most famous for creating Buffy the Vampire Slayer, its spin-off Angel and the short-lived but much-loved Firefly series. But the writer and director has also worked unseen as a script doctor on movies ranging from Speed to Toy Story. Here, he shares his tips on the art of screenwriting. 1. 2. 3. 4. 5. 6. 7. 8. 9. 5 Ways to Get Rid of Your Damn Empty Modifiers. I discussed the need to get rid of empty emphatics when I gave you 8 words to seek and destroy in your writing, but just saying that you should get rid of a thing doesn't say much about the right way to do so. 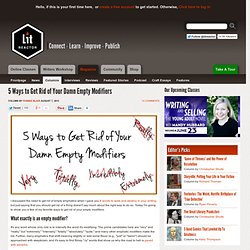 Today I'm going to show you a few of my favorite ways to get rid of your empty modifiers. What exactly is an empty modifier? It's any word whose only role is to intensify the word it's modifying. Plain Language Humor: How to Write Good. Default Narrative Sexism. Following on from my recent thoughts on female characters in YA dystopias and the Broken Bird trope, something else about the treatment of women in stories has been niggling at me. 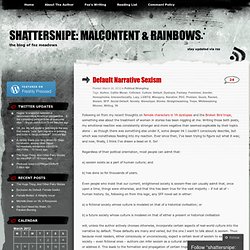 Writing those both posts, my emotional reaction was consistently stronger and more negative than seemed explicable by their topics alone – as though there was something else under it, some deeper irk I couldn’t consciously describe, but which was nonetheless feeding into my reaction. Ever since then, I’ve been trying to figure out what it was; and now, finally, I think I’ve drawn a bead on it. So! Regardless of their political orientation, most people can admit that: a) sexism exists as a part of human culture; and b) has done so for thousands of years.

Even people who insist that our current, enlightened society is sexism-free can usually admit that, once upon a time, things were otherwise, and that this has been true for the vast majority – if not all of – human history. And so on. For instance! Like this: Tropes.