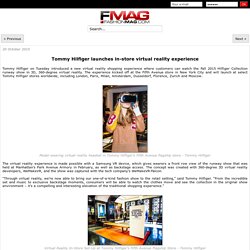 The experience kicked off at the Fifth Avenue store in New York City and will launch at select Tommy Hilfiger stores worldwide, including London, Paris, Milan, Amsterdam, Dusseldorf, Florence, Zurich and Moscow. The virtual reality experience is made possible with a Samsung VR device, which gives wearers a front row view of the runway show that was held at Manhattan’s Park Avenue Armory in February, as well as backstage access. 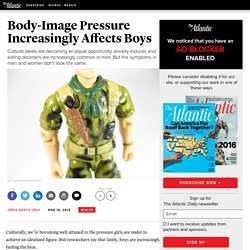 But researchers say that lately, boys are increasingly feeling the heat. A new study of a national sample of adolescent boys, published in the January issue of JAMA Pediatrics, reveals that nearly 18 percent of boys are highly concerned about their weight and physique. They are also at increased risk for a variety of negative outcomes: Boys in the study who were extremely concerned about weight were more likely to be depressed, and more likely to engage in high-risk behaviors such as binge drinking and drug use.

The trend toward weight obsession among boys is cause for worry, says Dr. Alison Field, an associate professor of pediatrics at Boston Children’s Hospital and the lead author of the study. “There are some males who do want to be thinner and are focused on thinness,” Field says, “but many more are focused on wanting bigger or at least more toned and defined muscles. Is Genderless Fashion the Future? I know that Selfridges in London did that recently, with an agender pop-up shop—what were your thoughts on that? 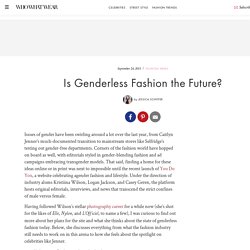 “Yes, I thought that was cool! I think it will be a while before people can fully understand it, though, and I think it would help if [a high-street store] like Topshop, H&M, or Uniqlo did it because they’re a little more accessible. The Selfridges pop-up was very high-end, which is cool because there are a lot of great designers working in that space, but it’s not realistic for most. Even if a lower-priced store just merged all the clothing together so you could figure it out for yourself, that would be great. But the thing is, dressing across genders is not for everybody, and that’s ok!” Have you met people who say that—who argue that they feel very strongly about dressing within their gender confines? “We haven’t, but if we’re going to make a site called You Do You, we have to recognise that a lot of people [might] and that they should be able to do that if they want to. Will Genderless Fashion Change Retail? (L-R) Raf Simons Menswear Spring/Summer 2014, Gucci Menswear Autumn/Winter 2015, J.W Anderson Menswear Spring/Summer 2014 | Source: Indigital LONDON, United Kingdom — Alessandro Michele’s womenswear debut for Gucci was, by far, the most anticipated show of Milan Fashion Week. 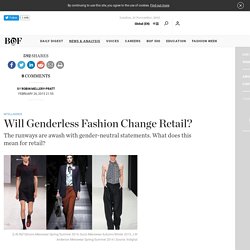 How would Michele attempt to re-reinvigorate Kering’s ailing cash cow, after chief executive François-Henri Pinault said in December that the brand needed a fresh point of view and more daring shows? The answer: bookish, pussy-bow wearing boys and girls, sharing both the runway and the same tailoring, shoulder-length locks and cut-glass cheekbones. Blurred Lines: Why Gender-Neutral Fashion Is the New Normal. Tunic by Public School. 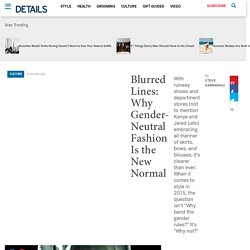 Shoes by O'Keeffe. I can finally come out with it, because it's not that big deal of a "reveal" anymore: About half of my older blue jeans (and some of my khakis and cords) are women's brands purchased by either me or my wife over the years. What can I say? They spoke to me more than what was on the men's racks at the time. I wasn't interested in a feminine silhouette, zippered ankles, or a skinny tapered leg that would Russell Brand me out. I liked the look of the women's denim that was gaining popularity at the time: flat-hipped, boot-legged, and low-riding.

And though I've never been busted by my guy posse for wearing women's clothes, I'm no longer self-conscious about taking a few pairs of size 10s to the dressing room. Maybe that's because it's getting harder to tell the women's department from the men's. Too "effeminate," "androgynous," "flamboyant," or "fey"?