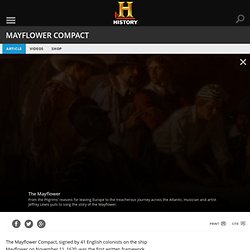 When it arrived at Cape Cod, several hundred miles north of its planned destination in Virginia owing to storms at sea, the passengers realized they were outside the bounds of the governmental authority they had contracted with in England. William Bradford, the Pilgrim leader, was alarmed to learn that some of the others felt no obligation to respect the rules of the Pilgrims. In his words, they wanted to “use their owne libertie.” The male heads of Pilgrim and non-Pilgrim families therefore drew up a compact that bound all signers to accept whatever form of government was established after landing. Stephen Hopkins of the Mayflower. By Kate L. 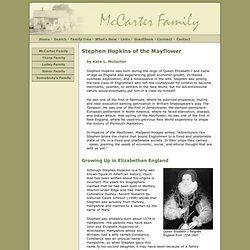 McCarter Stephen Hopkins was born during the reign of Queen Elizabeth I and came of age as England was experiencing great economic growth, increased overseas exploration, and a renaissance in the arts. Stephen was among the new class of Englishmen who left the countryside for London to become merchants, seamen, or settlers in the New World, but his adventuresome nature would eventually put him in a class by himself. THE REAL STORY OF THANKSGIVING. Finding Mayflower Families. Mayflower Compact, William Bradford, Pilgrims - Puritans Landed - 1620. Seattle Murder Committed by Either Time-Traveling Pilgrim or His Descendant.

Massachusetts Society of Mayflower Descendants. Mayflower Compact. Before the passengers went ashore, they drew up an instrument of self-government for the little band to replace the original patent. Mayflower Compact. In the name of God, Amen. We, whose names are underwritten, the Loyal Subjects of our dread Sovereign Lord, King James, by the Grace of God, of England, France and Ireland, King, Defender of the Faith, &c. Having undertaken for the Glory of God, and Advancement of the Christian Faith, and the Honour of our King and Country, a voyage to plant the first colony in the northern parts of Virginia; do by these presents, solemnly and mutually in the Presence of God and one of another, covenant and combine ourselves together into a civil Body Politick, for our better Ordering and Preservation, and Furtherance of the Ends aforesaid; And by Virtue hereof to enact, constitute, and frame, such just and equal Laws, Ordinances, Acts, Constitutions and Offices, from time to time, as shall be thought most meet and convenient for the General good of the Colony; unto which we promise all due submission and obedience.

John Carver [sig] John Howland [sig] William Brewster [sig] Edward Winslow [sig] Freedom: A History of US. Tools &Activities. Image Browser. Mayflower Heritage: California Mayflower Society. THE MAYFLOWER COMPACT. This Week in Maritime History: Boston Tea Party, Mayflower Docks at Plymouth Harbor. December 14, 2011 December 16, 1773: The Boston Tea Party In colonial America, a group of Massachusetts colonists decided to take matters of British imperial injustice into their own hands on December 16th of 1773 when they disguised themselves as Mohawk Indians and boarded three British tea ships, and dumped 342 chests of tea into the Boston Harbor, creating one of the most famous pre-revolution rebellion acts in American history. 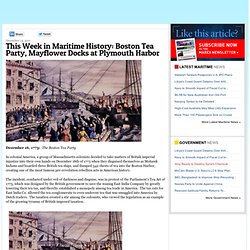 The incident, conducted under veil of darkness and disguise, was in protest of the Parliament’s Tea Act of 1773, which was designed by the British government to save the waning East India Company by greatly lowering their tea tax, and thereby established a monopoly among tea trade in America. The tax cuts for East India Co. allowed the tea conglomerate to even undercut tea that was smuggled into America by Dutch traders. Mayflower Compact (North America [1620]) American Experience. Mayflower Compact definition of Mayflower Compact in the Free Online Encyclopedia. Pilgrim Monument - Visit Pilgrim Monument on Cape Cod in Provincetown Massachusetts.

Updated November 04, 2013 American schoolchildren learn early on about the Pilgrims' treacherous, cross-Atlantic voyage aboard the Mayflower and their landing at Plymouth Rock in December of 1620, just in time for a long, hard New England winter. You might expect, then, to find the Pilgrim Monument in Plymouth, Massachusetts, near other Pilgrim attractions such as the Mayflower II, a replica of the famous ship, and Plimoth Plantation, a living history museum that recreates early life in Plymouth Colony.

Good thing this isn't a test... you would be wrong. The passenger list of the Mayflower, the PilgrimFathers, their families and their fate, where known. Mayflower Compact. See also: Mayflower Compact signatories. Mayflower Compact - eNotes.com Reference. What Really Happened at Plymouth. [This article is excerpted from Chapter 18 of Conceived In Liberty, Volume I, now available as a free ebook (PDF).] The first successful settlement in New England was something of an accident.

By 1617 the Pilgrims had determined to leave the Netherlands, where their youth were supposedly being corrupted by the "licentiousness" of even the Calvinist Dutch, who, for example, persisted in enjoying the Sabbath as a holiday rather than bearing it as a penance. Deciding to settle in America, the Pilgrims were offered an opportunity to settle in New Netherland, but preferred to seek a patent from the South Virginia Company, which would provide an English atmosphere in which to raise their children. The Pilgrims formed a partnership in a joint-stock company with a group of London merchants, including Thomas Weston, an ironmonger, and John Peirce, a clothmaker. In mid-December 1620 the Mayflower landed at Plymouth. All this while no supply was heard of…. Murray N. The Mayflower Compact. The Mayflower Compact is often cited as one of the foundations of the US Constitution.

The story of its creation begins with the Pilgrims in England. Pilgrims were separatists from the Anglican Church in England. They were protestants who did not recognize the authority of the Anglican Church and formed their own Puritan church. To escape persecution and possible imprisonment, they actually fled England for Holland in 1607. They lived in Holland for awhile before deciding to create their own colony in the New World. Did the Pilgrims land on Plymouth Rock because they ran out of beer? November 25, 2005 Dear Cecil: Is it true the Mayflower landed at Plymouth, Massachusetts in 1620 because the ship ran out of beer? I have been told that barrels of beer were the most voluminous and important item in the hold because water couldn't stay drinkable on a ship for that long. — James C., Massachusetts You heard right, more or less: The Mayflower colonists decided to settle at Plymouth because they were running low on beer.

Pretty much everything you think you know about the Pilgrims is wrong (including their being called Pilgrims--that term didn't catch on until centuries later), so it's not surprising the beer angle slipped under the radar. Heraldry on the History Road. The arms of John Alden of Plymouth, Massachusetts. 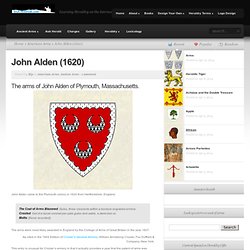 John Alden came to the Plymouth colony in 1620 from Hertfordshire, England. The Coat of Arms Blazoned: Gules, three crescents within a bordure engrailed ermine.Crested: Out of a ducal coronet per pale gules and sable, a demi-lion or.Motto: [None recorded]. John Alden. John Alden (c. 1599 – 1687)[1] John Alden was a crew member on the historic 1620 voyage of the Pilgrim ship Mayflower. Rather than return to England with the ship, he stayed at Plymouth, and can be considered a passenger. A Tale of Two Colonies - Gary Galles. At Thanksgiving, Americans recall their blessings around bountiful meals, with imagery going back to the Pilgrims, especially Plymouth Colony's 1623 Thanksgiving. But little attention is paid to what allows that bounty to be created — capitalism — though Jamestown and Plymouth both illustrate that lesson. Reflections restricted to our current bounty ignore that most colonists in both Jamestown and Plymouth starved under their initial communal-property rights.

Then, when private-property rights were established, starvation gave way to increasing prosperity in both colonies. In Jamestown, colonists were indentured servants whose first seven years' output was to go into a common pool. In Plymouth, all accumulated wealth was to be held in common, against colonists' objections, by sponsors worried they could not otherwise collect on their distant investment. Sixty-six of Jamestown's initial 104 colonists died within six months, most from famine. StumbleUpon. But since you're here anyway, why not learn a little about some other, rather more important things in Pilgrim history that have also gone missing: 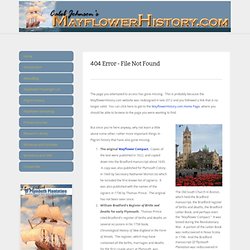