UNITED STATES: Prominent Trade Unionist to Publish Book on Basic Income. Andy Stern, the former President of the Service Employees International Union (SEIU) and a major voice on unions in America, will publish a book on June 14, 2016, titled Raising the Floor: How a Universal Basic Income Can Renew Our Economy and Rebuild the American Dream. 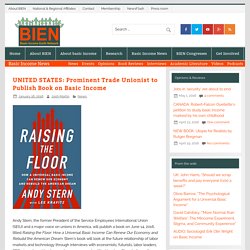 Stern’s book will look at the future relationship of labor markets and technology through interviews with economists, futurists, labor leaders, CEOs, investment bankers, entrepreneurs, and political leaders. Stern believes the foundation for economic prosperity for all Americans starts with a universal basic income, and while the idea may not be mainstream yet, he hopes to create a movement that forces the political establishment to take action on the issue.

This will not be Stern’s first book. A Country That Works called for unions to be dominant vehicles in promoting social reforms and was successful enough to land Stern an appearance on The Colbert Report in 2006 to promote the book. Innovation is overvalued. Maintenance often matters more. Innovation is a dominant ideology of our era, embraced in America by Silicon Valley, Wall Street, and the Washington DC political elite. 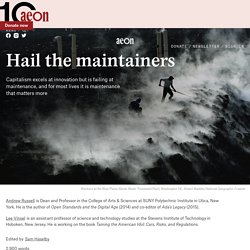 As the pursuit of innovation has inspired technologists and capitalists, it has also provoked critics who suspect that the peddlers of innovation radically overvalue innovation. What happens after innovation, they argue, is more important. Maintenance and repair, the building of infrastructures, the mundane labour that goes into sustaining functioning and efficient infrastructures, simply has more impact on people’s daily lives than the vast majority of technological innovations. The fates of nations on opposing sides of the Iron Curtain illustrate good reasons that led to the rise of innovation as a buzzword and organising concept. Over the course of the 20th century, open societies that celebrated diversity, novelty, and progress performed better than closed societies that defended uniformity and order.

Why do we work so hard? When I was young, there was nothing so bad as being asked to work. 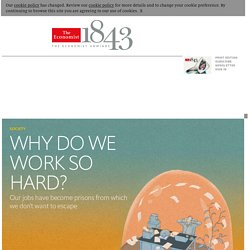 Now I find it hard to conjure up that feeling, but I see it in my five-year-old daughter. “Can I please have some water, daddy?” “You can get it yourself, you’re a big girl.”