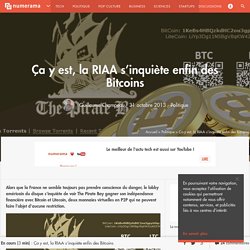 How blockchain could help musicians make a living from music. In the decade and a half since Napster, it’s got harder for musicians to make a living, at least from recorded music. 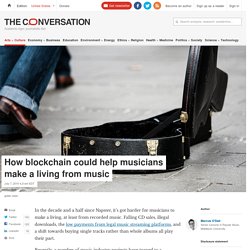 Falling CD sales, illegal downloads, the low payments from legal music streaming platforms, and a shift towards buying single tracks rather than whole albums all play their part. Recently, a number of music industry projects have turned to a particular technology as a possible solution to these problems. These include Mycelia, launched by singer, songwriter and producer Imogen Heap, and Dot Blockchain Music, launched by PledgeMusic founder Benji Rogers.

Then there’s Ujo Music, Blokur, Aurovine, Resonate, Peertracks, Stem and Bittunes, which already claims users in 70 countries. What links these projects is that they all are based on blockchain. Blockchain is the software that underpins bitcoin and other cryptocurrencies. Owning it The first problem facing musicians comes down to the fact that no comprehensive database of music copyright ownership exists. Getting paid. Blockchain Music Library – Public Radio BizLab. In partnership with Revelator, we have created a rights-cleared music library for use in T​he Magic Pill podcast using blockchain technology. 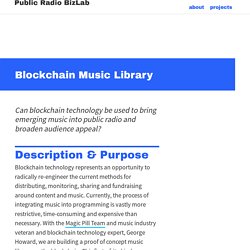 Revelator is a leading music technology company focused on leveraging innovations, such as blockchain, to create efficiencies and transparency around rights management. We are part of the Open Music Initiative Summer Lab orchestrated by Berklee College of Music’s Institute for Creative Entrepreneurship and IDEO. The “Summer Lab” addresses the challenge of getting quality data about music into a shared ledger. Our Music Library is a proof of concept use case that will help the participants explore the intersection of open source technologies, creator rights, and music consumption. 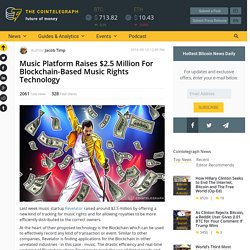 At the heart of their proposed technology is the Blockchain which can be used to effectively record any kind of transaction or event. Similar to other companies, Revelator is finding applications for the Blockchain in other unrelated industries - in this case - music. The drastic efficiency and real-time updating of Blockchain allows Revelator to track the use of digital goods and distribute royalties to their owners when they’re due. Prior to Revelator, musical artists did not receive their owed royalties for weeks and often months. The difficulty and corresponding time period is increased when multiple people split the royalties of the very same song. La technologie Blockchain est-elle l’avenir de la musique ? La Blockchain, technologie au cœur de tous les sujets, pourrait bien être la prochaine révolution depuis Internet. 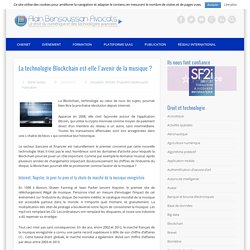 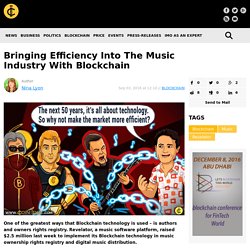 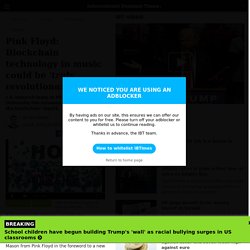 The "Music on the blockchain" report from a research team at Middlesex University, continues a concerted effort led by musician and technologist Imogen Heap to get artists a fairer deal using blockchain designs. Heap has brought together members of the Ethereum community, ConsesnSys and a host of others at London's Sonos studios. What a blockchain for music really means. #MTFLabs Blockchain. At #MTFBerlin in May 2016, we brought together a diverse group including some of the world’s leading experts in blockchain technology, cryptography, metadata, music business, songwriting rights and royalties - representing artists, online music services, financial tech and other interests. 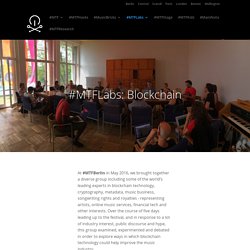 Over the course of five days leading up to the festival, and in response to a lot of industry interest, public discourse and hype, this group examined, experimented and debated in order to explore ways in which blockchain technology could help improve the music industry. It soon became apparent that before improvements could be attempted, first there must be agreement what would constitute an improvement. The result was a whitepaper that maps out both the bene fits and drawbacks of how an actual implementation might distribute among industry players and stakeholders - from artists to audiences and all of the many intermediaries. Blockchain Music Library – Public Radio BizLab. Ch en innovation deloitte blockchain app in media. Muse Blockchain. What is MUSE? 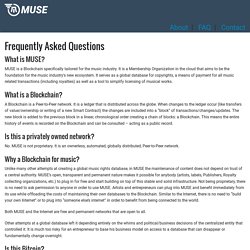 MUSE is a Blockchain specifically tailored for the music industry. It is a Membership Organization in the cloud that aims to be the foundation for the music industry’s new ecosystem. It serves as a global database for copyrights, a means of payment for all music related transactions (including royalties) as well as a tool to simplify licensing of musical works. From YouTube to the blockchain: how music and tech are colliding in 2016. The music industry and technology? 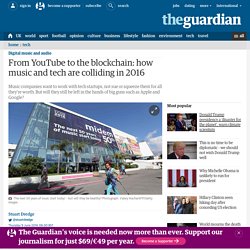 To borrow Facebook’s lingo, the relationship is complicated. File-sharing service Napster’s emergence in 1999 was the cue for more than a decade of fear, loathing and ill-fated decisions from major music companies, and perceptions of a gulf between the worlds of music and tech that linger to this day. That’s not the whole story.

Even in 1999, there were plenty of music executives excited about digital disruption rather than panicked by it – even if many were too junior to influence their bosses’ strategies driven by the latter emotion. The .BC Music Project. Blockchain Could Be Music’s Next Disruptor. Anyone who follows the music industry knows of the tussles between artists and those who rely on their creative output. The traditional food chain is a long one: between those who create the music and those who pay for it—music lovers, concert goers, advertisers, rights licensees, and corporate sponsors—there are publishers, producers, and talent agencies, and countless others with a stake in the industry.

Each of these intermediaries takes a cut of the revenues and passes along the rest, the remainder of which eventually reaches the artists and musicians somewhere between 6 and 18 months. Many thought the Internet might help democratize the industry, but the opposite has occurred. We have swung from one extreme to the other. Blockchain Technology Could Help Bring about a Music Revolution. How Blockchain Startups Are Disrupting The $15 Billion Music Industry. How blockchain can change the music industry. Ben Dickson is a software engineer and the founder of TechTalks.

Since the 1999 launch of Napster’s music-sharing platform, the music industry has been in near-constant turmoil, its timeline marked with dipping revenues, lack of transparency, piracy problems and feuds over the fair distribution of dividends. Music companies hate streaming services. Streaming services hate file-sharing services. And, most of all, artists and content creators hate virtually everyone else for making huge sums off their toil and feeding them the crumbs.

With so many conflicts of interest, there seems to be no one service or business model that can work in a fashion that satisfies the needs of all the parties involved. How 'the Blockchain' Could Actually Change the Music Industry. The blockchain is a decentralized system, with no single entity controlling it. The servers keeping its backbone upright are scattered across the globe, and for that reason the technology is transparent; everyone can see its anonymized data. It could also replace notaries, as every transaction is time stamped automatically and receives a unique ID. No exchange rates apply either, because cryptocurrencies are oblivious to borders.