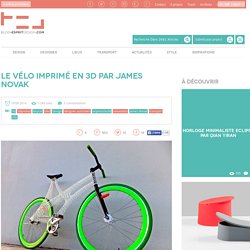 Steam-O Bicycle by János Insperger. Designer János Insperger's 'Steam-O' is a modern cruiser inspired by the iconic steam locomotives of the past, applying the signature aerodynamic shape to its stark frame. 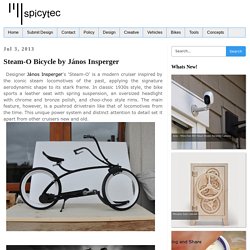 In classic 1930s style, the bike sports a leather seat with spring suspension, an oversized headlight with chrome and bronze polish, and choo-choo style rims. The main feature, however, is a pushrod drivetrain like that of locomotives from the time. This unique power system and distinct attention to detail set it apart from other cruisers new and old. Pedaling torque is transmitted by bearing on shaft and coupling rods. CYCONWORLD. Prone Bikes : Get into Position. IRUKAN by Martin Esteva at Coroflot.com. Marbel - World's Lightest Electric Skateboard. Fender Blender Pro. Top 10 features & benefits of the Fender Blender Pro (High Performance) (click the image to enlarge) Flax and Spinach Power Smoothie This recipe comes from Jessa Hokayam of e2 events in Virginia. 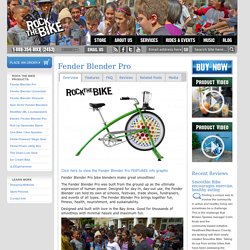 Geetobee folding scooter lets adults have some fun. The “Geetobee” from Jamily Design Studio is a folding scooter for adults that folds into a compact form, thereby facilitating transportation or storage. 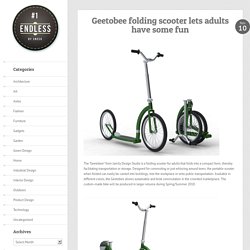 Designed for commuting or just whizzing around town, the portable scooter when folded can easily be carried into buildings, into the workplace or onto public transportation. Available in different colors, the Geetobee allows sustainable and brisk commutation in the crowded marketplace. The custom-made bike will be produced in larger volume during Spring/Summer 2010. Via: Jamily Nov 10. Pins from trottinette-patinette.blogspot.com on Pinterest. Psychotronic skookterist ... ist trottinette-blogspot. 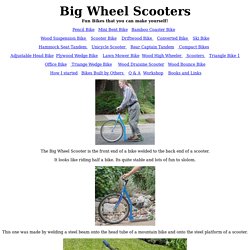 Pencil Bike Mini Bent Bike Bamboo Coaster Bike. Scooters, Kick Scooters, All Terrain Scooters, Urban Mushing Scooters. DSC00149.jpg Photo by philsk5. Waimea Weekly NewspapersNelson Weekly. Nelson’s Ross Mathews is a joiner and a greenie, so it made sense that when he decided to design and build a motorised scooter it would be powered by electricity and made from wood. 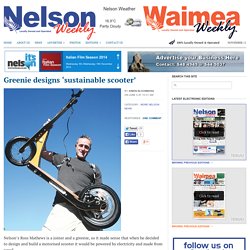 And now the eco-friendly design seems to be catching on with Ross receiving a lot of interest in the custom-made scooters which he has just started producing in his workshop in Nelson. Ross has only made “just over a dozen” of the Spectrum Scooters and has already sold half of those, mostly to buyers in the North Island. “I used to ride motorbikes so I’ve always been interested in that sort of thing, so I decided to design a scooter that fitted with a sustainable theme. I make the frame out of imported plywood that comes from sustainable forests and it’s powered by a lithium ion battery which last about two hours and recharges in four.”

Ross says he buys the bike parts, such as wheels and brakes from Village Cycles, as well as the electrical components but makes the rest himself. Co je u nás nového? - HUGO Bike. Kickbikes, Electric on Pinterest. Villichbike.com - We make kick bikes! Bamboobee lets you cruise around on your own self-made bicycle. Sep 22, 2014 bamboobee lets you cruise around on your own self-made bicycle bamboobee lets you cruise around on your own self-made bicycleall images courtesy of bamboobee in 2013, a company by the name of bamboobee entered the world of product design with their ‘honey infused bamboo bicycles‘. following the success of this popular material, the singapore firm has launched the ‘build it yourself (BIY) bike kit’. the idea is simple. the project allows you to experience the satisfaction of building your own vehicle from scratch. the set includes bicycle cable bamboo holders, stainless steel dropouts, aluminum head tubes, bottom brackets, a pen file, a transparent tape roll, and reinforced metal wire. an instruction manual and recyclable frame jig guide the assembly process as each joint is secured by a 25-meter supply of hemp fiber. the team hopes to get your support in crowdfunding for the project on prefundia. video courtesy of bamboobee the seven bamboo stalks content inside the small boxes. 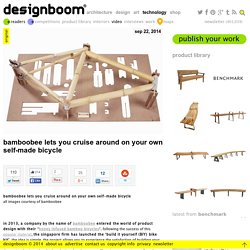 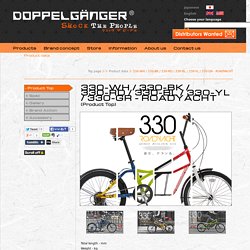 Space Roam - Bicycle Concept by Chen Hsin Lin. Out of This World Fixie As you might have guessed from the name, the Space Roam fixed gear bike looks to the universe for inspiration to break away from predictable design. 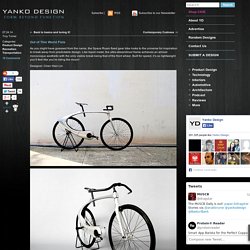 Like liquid metal, the ultra-streamlined frame achieves an almost monocoque aesthetic with the only visible break being that of the front wheel. Built for speed, it’s so lightweight you’ll feel like you’re riding the moon! Designer: Chen Hsin Lin. Foldable HPV_2F vehicle is the future of human powered mobility. The HPV_2F is a foldable vehicle that explores the potential of ​​”human powered vehicles” in a world that is fast running out of space to park conventional personal mobility vehicles. 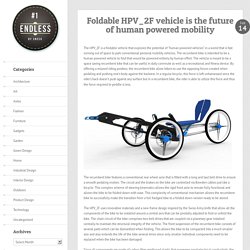 The recumbent bike is intended to be a human powered vehicle to fold that would be powered entirely by human effort. The vehicle is meant to be a space saving recumbent bike that can be useful in daily commute as well as a recreational and fitness device. By offering a relaxed riding position, the recumbent bike allow bikers to use the opposing forces created when pedaling and pushing one’s body against the backrest. In a regular bicycle, this force is left unharnessed since the rider’s back doesn’t push against any surface but in a recumbent bike, the rider is able to utilize this force and thus the force required to peddle is less. The recumbent bike features a conventional rear wheel axle that is fitted with a long and taut belt drive to ensure a smooth pedaling motion. Retro OTO Electric Bicycles. Cesar van Rongen.

Sustainable bamboo bikes for urban streets by guapa. Sep 12, 2013 sustainable bamboo bikes for urban streets by guapa sustainable bamboo bikes for urban streets by guapa all images courtesy of guapa made predominantly from bamboo, these sustainable bikes by english bicycle company guapa are influenced from technologies used in extreme sports such as surfing and wake-boarding. combining both ergonomics and aesthetic qualities, the frames are constructed from bamboo – one of the world’s fastest growing plants – along with carbon to create a riding experience that is smooth, yet stiff and responsive. intended for use in urban environments the first series features a single speed bike and a dutch town bike. guapa’s eco-friendly design aims to eventually reduce the use of carbon-fiber, substituting it with different materials to create a more complete, sustainable bicycle. side view of the guapa bike, which is made from a combination of bamboo and carbon detail of the crank (left) and rear stays (right)

Ecotenka. Chart: The Evolution Of Bicycles. Home / 100copies. Global Cycle Solutions. Global Cycle Solutions is a social enterprise working to develop and disseminate affordable, quality technology for villagers around the world. Our subsidiary, GCS Tanzania Limited, is building a distribution network of local entrepreneurs who teach, introduce, and sell high-impact technologies to villagers in the most remote of places. As we work deep in the villages with a demand-driven model, we are able to better understand the needs of our customers. List of bicycle types.

Bicycles can be categorized by function, number of riders, gearing, sport, means of propulsion, position of the rider or as here the frame type: This is a type intended for use by females, with a lowered top tube due to consideration for skirts. This list gives an overview of different types of bicycles, categorized by function (racing, recreation, etc.); number of riders (one, two, or more); by construction or frame type (upright, folding, etc.); by gearing (single speed, derailleur gears, etc.); by sport (mountain biking, BMX, triathlon, etc.); by means of propulsion (human-powered, motor-assisted, etc.); and by rider position (upright, recumbent, etc.)

The list also includes miscellaneous types such as pedicabs, rickshaws, and clown bikes. The categories are not mutually exclusive; as such, a bike type may appear in more than one category. By function[edit] The main categories of bicycles in relation to their intended use are: STEPPER BIKE on Behance. RUNGU FAT-TRIKE. SRV.h – Eco Friendly Transportation by Chiu-YenKai. Skippy The Scooty Love the thoughtful SRV .h concept. It is an eco-friendly concept vehicle that is best suited for shopping and mobility. Basically this commuter scooter can transform to a helpful shopping cart via some simple folding steps. Details that include a cradle for storing your phone makes this such an awesome thang. Elegant and functional, this is my scooty of the future! Artikcar small pedal-powered vehicle by Ben Wilson » Decodir. Home » Automotive » Artikcar small pedal-powered vehicle by Ben Wilson Designed by the British artist and designer Ben Wilson in the Art Car Parade organized by the company Walk the Plank to be held in Manchester and Edinburgh, the Artikcar concept is a small pedal-powered vehicle made out of steel tubing, it steers by leaning and uses an innovative technology to illuminate the car.

The design was inspired by the silhouette of wooden toy cars for children. Ben Wilson was one of three artists to be awarded commissioning money to create a mobile work of art, which will join the existing troupe of vehicles. Comments. Lumigrids. Mehr Übersicht im Dunkeln: Lumigrids projiziert ein Gitternetz vors Fahrrad.

The bike has been created by Korean manufacturer Bygen and uses levers that transfer power from the pedals to the rear wheel directly. As well as using a very unique way of folding or rather collapsing the bike down for storage and transportation. Pedal Power Design + Build — Human Scale, Multifunction, Pedal Powered Machines. Bicycle Flat Tire Permanent Repair: How to Fix Flat Tire.

Smart Skateboard Travels 10 Miles on a Single Charge. Between the embarrassingly awkward Segway and the prohibitively expensive Tesla there now exists a attractive middle ground: the smart skateboard. A number of electric skateboards have cropped up in recent years, but the Marbel delivers on so many different levels it could easily become popular among even those who have never considered riding a skateboard. Controlled by a smartphone app (for both iOS and Android), the Florida-based makers of the tiny vehicle claim that it's the lightest electric skateboard ever at just 9.9 pounds.

Its light yet sturdy form is due in part to the fact that it's constructed using lightweight carbon fiber and Kevlar. The Marbel can travel up to 10 miles on a single charge and can be recharged in just 90 minutes. Find the Best Longboards. It started with a fight... Quick Caps. Insane Russian Attack Bike is Powered by Chainsaw. Other than the fact that it was constructed in Russia, we aren’t entirely sure who’s responsible for this mean-looking chainsaw bike. While it may look like it’s designed for the sole purpose of cutting down everything in its path, the chainsaw’s motor does in fact power the front wheel of the bike.