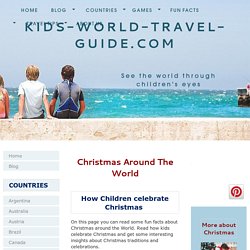 Read how kids celebrate Christmas and get some interesting insights about Christmas traditions and celebrations. At Christmas, Christians all over the world celebrate the birth of Jesus Christ. Traditional Christmas decoration often can be admired and festive celebrations can be joined in most countries, even in many of the countries where Christianity is not the religion of the majority of people. Christmas trees are a popular decoration as are tiny sparkling lights in windows and on walls.

Christmas Celebrations. Christmas Around the World, Christmas Traditions and Celebrations in Different Countries and Cultures. How do different countries celebrate Christmas. Online Advent Calendar 2014 - Interactive and Fun. On each day in December 2014, test your knowledge on how Christmas is celebrated around the world, using our very own interactive advent calendar. 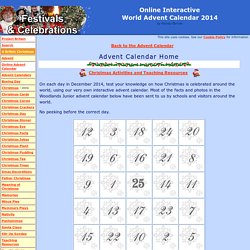 Most of the facts and photos in the Woodlands Junior advent calendar below have been sent to us by schools and visitors around the world. No peeking before the correct day. The Woodlands Junior Advent Calendar 2014 online interactive advent calendar contains fascinating facts and information about how Christmas is celebrated in different countries around the world including: How does red-suited Santa survive in the heat of a Brazilian summer? Christmas traditions for kids. Facts about Father Christmas (Santa Claus) for Kids. We owe much about what we know about the Father Christmas today to the Americans of the 19th Century. 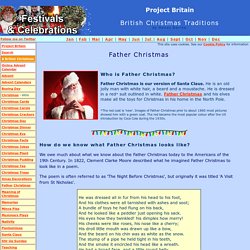 In 1822, Clement Clarke Moore described what he imagined Father Christmas to look like in a poem. The poem is often referred to as 'The Night Before Christmas', but originally it was titled 'A Visit from St Nicholas'. In 1866, Thomas Nast, a cartoon artist for the Harper's Illustrated Weekly, made a montage entitled, "Santa Claus His Works" and for the first time established 'Santa' as a maker of toys. Christmas Decorations Traditions and origins of decorations. Traditional Christmas Decorations To celebrate Jesus' birthday on Christmas Day many people decorate their homes. © copyright of projectbritain.com Red and green are the traditional colours of Christmas. 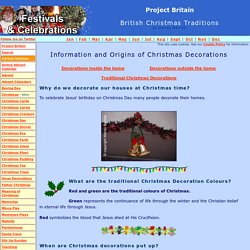 Green represents the continuance of life through the winter and the Christian belief in eternal life through Jesus. © copyright of projectbritain.com Red symbolizes the blood that Jesus shed at His Crucifixion. Christmas decorations used to be put up on Christmas Eve and not before. Christmas Tree Traditions in Britain (A British Christmas) Most houses in Britain, will have a tree of some sort or other which they will decorate and will place the presents under. 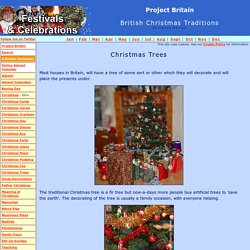 The traditional Christmas tree is a fir tree but now-a-days more people buy artificial trees to 'save the earth'. The decorating of the tree is usually a family occasion, with everyone helping. Tinsel, chocolates and fairy lights. Christmas Crackers - history and facts. Christmas Crackers are very popular and accompany many meals over the Christmas period, especially on Christmas Day. 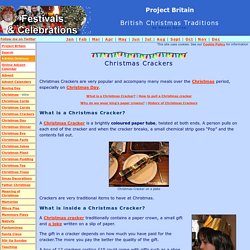 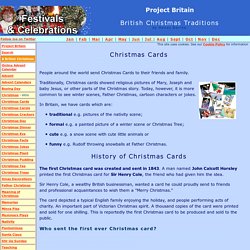 Traditionally, Christmas cards showed religious pictures of Mary, Joseph and baby Jesus, or other parts of the Christmas story. Today, however, it is more common to see winter scenes, Father Christmas, cartoon characters or jokes. In Britain, we have cards which are: Information on Advent Calendars - History and traditions. Click here to visit our online Advent Calendar 2013 Advent is the start of the Christmas season in Britain. 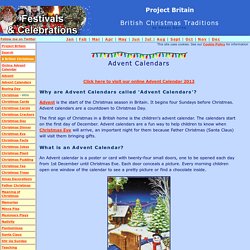 It begins four Sundays before Christmas. Advent calendars are a countdown to Christmas Day. The first sign of Christmas in a British home is the children's advent calendar. The calendars start on the first day of December. Facts about Christmas for Kids. What are the names of Santa's reindeer? 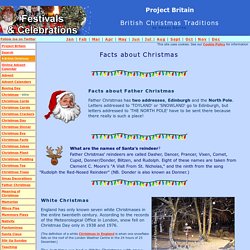 Related:  English   -  Around the world   -  Svenska   -  Geography and culture   -  Engelska   -  Christmas Around the World, Christmas Traditions and Celebrations in Different Countries and Cultures   -  Education   -  Enterprise