American Citizens: U.S. Border Agents Can Search Your Cellphone. When Buffalo, New York couple Akram Shibly and Kelly McCormick returned to the U.S. from a trip to Toronto on Jan. 1, 2017, U.S. 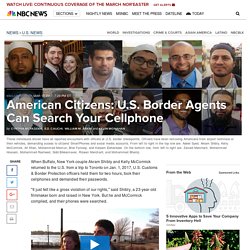 Customs & Border Protection officers held them for two hours, took their cellphones and demanded their passwords. I’ll never bring my phone on an international flight again. Neither should you. A few months ago I wrote about how you can encrypt your entire life in less than an hour. 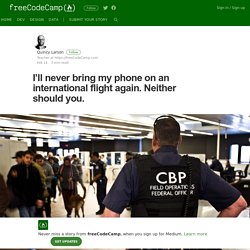 Log In - New York Times. No Charges for Cops Who ‘Accidentally’ Fired 107 Bullets at an Innocent Mom and Daughter. Los Angeles, CA – Exposing the double standard between police and civilians, the Los Angeles County District Attorney’s Office announced Wednesday that no criminal charges will be filed against the eight LAPD officers responsible for nearly killing an innocent woman and her daughter. 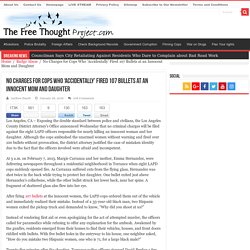 Stop the Madness! Police Officer Pulls Gun on Man in His Own Driveway: ‘Put It on YouTube, I Don’t Care’ A Northern California police department is reviewing footage filmed by a man named Don McComas showing one of their officers pulling a gun on him for absolutely no reason. 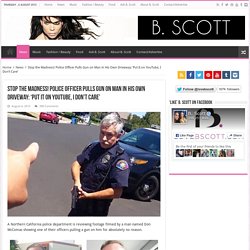 This (above) is Don McComas, and yes, he lived. The Making of the Warrior Cop. By 7:30 on Thursday morning, the capacious ground-floor convention center of the Oakland Marriott was filled with SWAT teams. 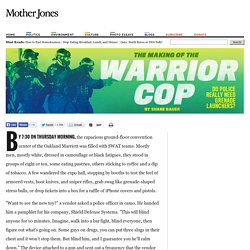 Mostly men, mostly white, dressed in camouflage or black fatigues, they stood in groups of eight or ten, some eating pastries, others sticking to coffee and a dip of tobacco. A few wandered the expo hall, stopping by booths to test the feel of armored vests, boot knives, and sniper rifles, grab swag like grenade-shaped stress balls, or drop tickets into a box for a raffle of iPhone covers and pistols. "Want to see the new toy? " a vendor asked a police officer in camo. Data surveillance in the U.S.: necessary or 'obscenely outrageous'? Details on millions of American phone calls. 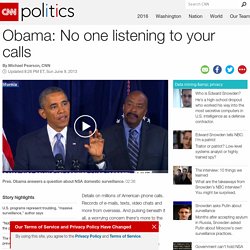 Records of e-mails, texts, video chats and more from overseas. And pulsing beneath it all, a worrying concern there's more to the government's surveillance programs than what's been acknowledged. All the revelations about U.S. surveillance programs in recent days have put the government on the defensive, set privacy advocates howling for reform and left millions of Americans somewhere in the middle, wondering what the news means to them and what, if anything, they should do about it. Obama administration defends collecting Verizon phone data. WASHINGTON -- The Obama administration is defending the government's secret seizure of millions of domestic telephone records from Verizon, saying the data collection program “has been a critical tool in protecting the nation from terrorist threats to the United States.” 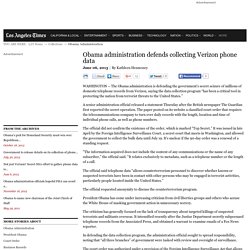 A senior administration official released a statement Thursday after the British newspaper The Guardian first reported the secret operation. The paper posted on its website a classified court order that requires the telecommunications company to turn over daily records with the length, location and time of individual phone calls, as well as phone numbers. The official did not confirm the existence of the order, which is marked "Top Secret. " It was issued in late April by the Foreign Intelligence Surveillance Court, a secret court that meets in Washington, and allowed the government to collect the bulk data until July 19. 1.6 Billion Rounds Of Ammo For Homeland Security? It's Time For A National Conversation.

CIA Whistleblower: “US is a Police State, Obama Consciously Allows Torture” Ten years ago, the idea of the US government spying on its citizens, intercepting their emails or killing them with drones was unthinkable. 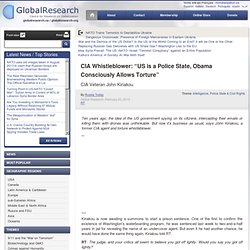 But now it’s business as usual, says John Kiriakou, a former CIA agent and torture whistleblower. *** Kiriakou is now awaiting a summons to start a prison sentence. DEA Ignored All My Cries: Student. Daniel Chong, the UC San Diego student who was left in a Drug Enforcement Administration holding cell for nearly five days, has filed a claim asking for $20 million following the incident he called "life-altering. 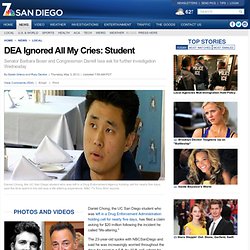 " The 23-year-old spoke with NBCSanDiego and said he was increasingly worried throughout the days he spent in a 5 ft. by 10 ft. cell, where he could not spread his arms out wide. “They never came back, ignored all my cries and I still don’t know what happened,” he said. What's the government buying these days? Hollow point bullets, hardened checkpoint booths and radiation pills. (NaturalNews) You can tell a lot about a person by assessing what they purchase. 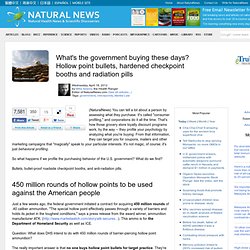 It's called "consumer profiling," and corporations do it all the time. That's how those grocery store loyalty discount programs work, by the way -- they profile your psychology by analyzing what you're buying. From that information, they can target you for coupons, mailers and other marketing campaigns that "magically" speak to your particular interests. It's not magic, of course; it's just behavioral profiling. So what happens if we profile the purchasing behavior of the U.S. government? US Congress passes authoritarian anti-protest law. By Tom Carter 3 March 2012 Defend democratic rights! Support the Socialist Equality Party election campaign! For more information and to get involved, click here. A bill passed Monday in the US House of Representatives and Thursday in the Senate would expand existing anti-protest laws that make it a felony—a serious criminal offense punishable by a lengthy prison term—to “enter or remain in” an area designated as “restricted.”

The bill—H.R. 347, or the “Federal Restricted Buildings and Grounds Improvement Act of 2011”—was passed by unanimous consent in the Senate, while only Ron Paul and two other Republicans voted against the bill in the House of Representatives (the bill passed 388-3). H.R. 347 expands an existing federal criminal statute – Title 18, Section 1752 of the United States Code, or the “restricted buildings or grounds” law. Under existing law, the areas that qualify as “restricted” are defined in extremely vague and broad terms. When the Right to Resist Becomes the "Duty to Submit" By William Norman Grigg Anne Dekins was a loud-mouthed party girl -- or at least, that's what the arrest warrant suggested. Whatever she may have done in the past, Miss Dekins was quietly minding her own business when Officer Samuel Bray found her on the street and began to haul her away. Dekins wasn’t inclined to go quietly, and she put up a struggle.

TSA Arrests Me for Using the Fourth Amendment as a Weapon (Tales from the Edge of a Revolution #2) I'm speaking loud and clear so those around me can hear. Before I get to "unreasonable search" a man in an ill-fitting suit and a tie marches up to me. Naomi Wolf: Fascist America, in 10 easy steps. Last autumn, there was a military coup in Thailand. The leaders of the coup took a number of steps, rather systematically, as if they had a shopping list. In a sense, they did. Within a matter of days, democracy had been closed down: the coup leaders declared martial law, sent armed soldiers into residential areas, took over radio and TV stations, issued restrictions on the press, tightened some limits on travel, and took certain activists into custody.

How the new ‘Protecting Children’ bill puts you at risk. Last Thursday the U.S. House of Representatives' judiciary committee passed a bill that makes the online activity of every American available to police and attorneys upon request under the guise of protecting children from pornography. An un-American response to the Oslo attack - Glenn Greenwald. Over the last decade, virtually every Terrorist plot aimed at the U.S. — whether successful or failed — has provoked greater security and surveillance measures.

William D. Hartung: Is Lockheed Martin Shadowing You?: How a Giant Weapons Maker Became the New Big Brother. Revealed: US spy operation that manipulates social media. The US military is developing software that will let it secretly manipulate social media sites by using fake online personas to influence internet conversations and spread pro-American propaganda. A Californian corporation has been awarded a contract with United States Central Command (Centcom), which oversees US armed operations in the Middle East and Central Asia, to develop what is described as an "online persona management service" that will allow one US serviceman or woman to control up to 10 separate identities based all over the world.

Reid put the legislation in a House message received by the Senate after the chamber voted 74-13 to table the bill. Republican Sens. Government Orders You Tube To Censor Protest Videos. Forget copyright infringement, You Tube is now complying with removal orders from governments to stop populist rage going viral Paul Joseph WatsonPrison Planet.com Friday, May 20, 2011. The always-expanding bipartisan Surveillance State - Glenn Greenwald. (updated below – Update II) 9/11 Responders To Be Warned They Will Be Screened By FBI's Terrorism Watch List (EXCLUSIVE) WASHINGTON -- A provision in the new 9/11 health bill may be adding insult to injury for people who fell sick after their service in the aftermath of the 2001 Al Qaeda attacks, The Huffington Post has learned.