Panama Papers explainer: What you should know. A coalition of more than 100 media organizations on Sunday published what it said was an extensive probe into the offshore financial deals of the rich and famous from documents from a Panamanian law firm, Mossack Fonseca, fed from an anonymous source. 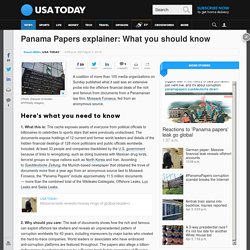 Here's what you need to know 1. What this is: The cache exposes assets of everyone from political officials to billionaires to celebrities to sports stars that were previously undisclosed. The documents expose holdings of 12 current and former world leaders and details of the hidden financial dealings of 128 more politicians and public officials worldwide. Included: At least 33 people and companies blacklisted by the U.S. government because of links to wrongdoing, such as doing business with Mexican drug lords, terrorist groups or rogue nations such as North Korea and Iran.

Americans are paying more for slower Internet - Oct. 31, 2014. Tax Rates Since 1945. The final nail in the supply side coffin - How the World Works. Woman Gang-Raped by 7 Halliburton Employees "Signed Away" Her Right to Sue? How Justice Has Become the Privilege of Corporations. June 29, 2011 | Like this article? 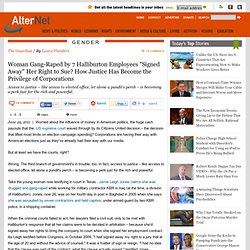 Join our email list: Stay up to date with the latest headlines via email. Worried about the influence of money in American politics, the huge cash payouts that the US supreme court waved through by its Citizens United decision – the decision that lifted most limits on election campaign spending? Benmosche: AIG Mortgage Unit Thrives on `Red State' Culture. American International Group Inc.’s mortgage insurer does more business in Republican-leaning states as it signs up more reliable customers than those in “more liberal” areas, Chief Executive Officer Robert Benmosche said. 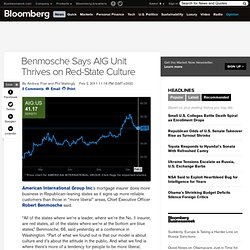 “All of the states where we’re a leader, where we’re the No. 1 insurer, are red states, all of the states where we’re at the bottom are blue states,” Benmosche, 66, said yesterday at a conference in Washington. “Part of what we found out is that our model is about culture and it’s about the attitude in the public. And what we find is where there’s more of a tendency for people to be more liberal, more that the government is responsible for what happens to me.” Benmosche oversees an insurer propped up by more than $40 billion in government capital while competing mortgage guarantors operate without U.S. Treasury Department assistance. ‘Breathtakingly Hypocritical’ “If you want to talk about Red and Blue states, the leader of the Red states, George W. Walmart Allows Its Workers To Unionize In Other Countries, Just Not In The United States.

By Travis Waldron on June 8, 2011 at 12:40 pm "Walmart Allows Its Workers To Unionize In Other Countries, Just Not In The United States" To complete its acquisition of Massmart, a chain of retail stores in South Africa, Walmart struck a deal that must seem extraordinary to the company’s American employees. 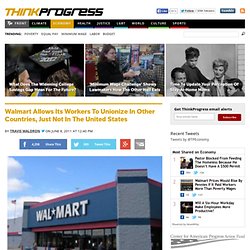 To win government approval of the acquisition, Walmart made concessions to a South African labor union, agreeing to avoid worker layoffs, honor existing union contracts, and use local suppliers. The idea that Walmart negotiated with and made concessions to a labor union in South Africa may seem odd to workers in the United States, where Walmart has developed a reputation as one of the country’s most virulent opponents of organization efforts. In Brazil, Argentina, China, the United Kingdom, and now South Africa, some Walmart employees are organized.

“We have a local philosophy,” Wal-Mart International Chief Executive Doug McMillon recently told reporters. With A Stroke Of His Pen Obama Strikes Back At Citizens United. A little over a year ago the Supreme Court of the United States made a controversial ruling that says corporate funding of independent political broadcasts in candidate elections cannot be limited. 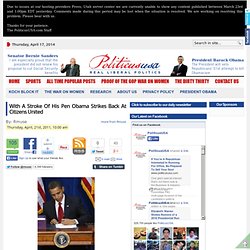 The case known as Citizens United v Federal Election Commission allows corporations to use their general funds to buy campaign ads that was prohibited under federal law, and opened the door for unlimited contributions by corporations as well as unions. Why is America the 'no-vacation nation'? Thinking of getting away? 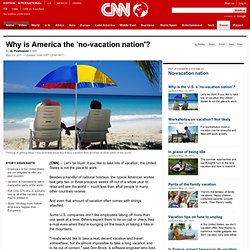 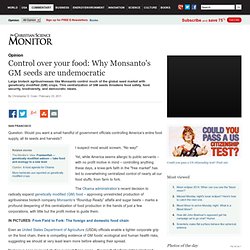 Cook / February 23, 2011 Question: Would you want a small handful of government officials controlling America’s entire food supply, all its seeds and harvests? Skip to next paragraph Subscribe Today to the Monitor Click Here for your FREE 30 DAYS ofThe Christian Science MonitorWeekly Digital Edition. Corporate Tax Revenues Nearing Historic Lows As A Percentage Of GDP, Report Says. Even as the federal deficit has ballooned, U.S. corporations are paying lower tax bills than ever before, according to one measure. 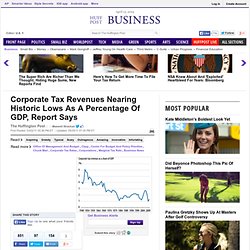 That's the takeaway from a new report by the Center on Budget and Policy Priorities dissecting the tax structures of corporations, which CBPP Director Chuck Marr says are now paying taxes at "historical lows as a share of the [total] economy. " Marr points to a basic discrepancy: While the U.S.'s top corporate tax rate of 35 percent is one of the highest in the world, the amount corporations actually end up forking over to the government is much lower, sometime as low as 4 percent.

This is due to a dizzying number of deductions, write-offs, and other accounting tricks that allow corporations to legally reduce their tax burden. In 2007, the report notes, the Treasury estimated federal government had missed an opportunity to collect $1.2 trillion due to various corporate tax expenditures over the previous decade. The myth of 'American exceptionalism' implodes. A homeless encampment known as Tent City, in Sacramento, California, in 2009. 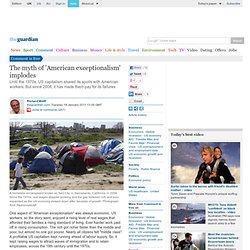 Since the 1970s, real wages stopped growing and the gap between rich and poor expanded as the US economy slowed down after decades of growth. Photograph: Rich Pedroncelli/AP One aspect of "American exceptionalism" was always economic. Halliburton reportedly agrees to pay Nigeria $250 million to drop bribery charges against Cheney, firm. By John ByrneTuesday, December 14, 2010 8:30 EDT The massive industrial conglomerate Halliburton has reportedly offered to pay $250 million to settle charges against its former chief executive, ex-Vice President Dick Cheney, in a multi-million dollar bribery case. 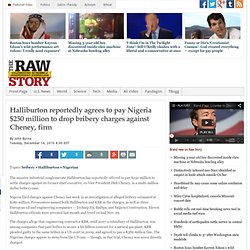 Nigeria filed charges against Cheney last week in an investigation of alleged bribery estimated at $180 million. Prosecutors named both Halliburton and KBR in the charges, as well as three European oil and engineering companies — Technip SA, EniSpa, and Saipem Construction. Eleven Halliburton officials were arrested last month and freed on bail Nov. 29. The charges allege that engineering contractor KBR, until 2007 a subsidiary of Halliburton, was among companies that paid bribes to secure a $6 billion contract for a natural gas plant. Who Eats Cotton Anyway? - Room for Debate. Farm subsidies represent a solution in search of a problem. News Corporation buys 90pc of US education technology provider. Rupert Murdoch sees a world of opportunity in education technology.

Picture by AFP Source: The Australian NEWS Corporation will pay $US360 million ($A364.7m) in cash for 90 per cent of Wireless Generation, a US education technology company. The global media giant said Wireless Generation will become a subsidiary of News Corporation that will be managed by founder and CEO Larry Berger, president Josh Reibel and executive vice-president Laurence Holt. News Corp said Mr Berger, Mr Reibel and Mr Holt will collectively retain a 10 per cent interest in the privately held, Brooklyn-based company. Wireless Generation was established in 2000 and provides mobile and web software, data systems and professional services that enable teachers to use data to assess student progress and deliver individualised instruction.

The company says it serves more than 200,000 teachers and three million students across 50 states of the US. America Appears To Be Trapped in a Massive Coverup of Control Fraud and Corruption. If Other Industries Were As Evil as the RIAA. U.S. Corporate Profits Hit Record in Third Quarter. Food stamps big money for JP Morgan Chase. According to a new federal report compiled by Mathematica Policy Research for the U.S.

Department of Agriculture, California ranks second to last in food stamp benefit participation with only half of eligible residents taking advantage of the program. Compare that with an average participation rate of 66 percent nationwide. Ralph Nader: Dems Face Losses to "Most Craven Republican Party in History" This is a rush transcript. Copy may not be in its final form. AMY GOODMAN: After months of campaigning, advertising and election spending, candidates across the country made a last-minute push Monday night as millions of voters head to the polls today.

Polls suggest Republicans could win enough seats to retake control of the House, while Democrats are expected to narrowly hold on to the Senate.