Reasons to Disagree with the GOP (Gaurdians of Plutocracy) 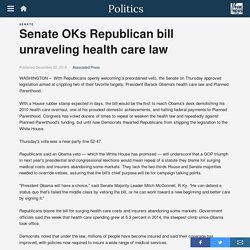 With a House rubber stamp expected in days, the bill would be the first to reach Obama's desk demolishing his 2010 health care overhaul, one of his proudest domestic achievements, and halting federal payments to Planned Parenthood. Congress has voted dozens of times to repeal or weaken the health law and repeatedly against Planned Parenthood's funding, but until now Democrats thwarted Republicans from shipping the legislation to the White House. Thursday's vote was a near party-line 52-47. Republicans said an Obama veto — which the White House has promised — will underscore that a GOP triumph in next year's presidential and congressional elections would mean repeal of a statute they blame for surging medical costs and insurers abandoning some markets.

Lindsey Graham: as president I would deploy the military against Congress. Republican senator and presidential maybe-hopeful Lindsey Graham stopped by the "politics and pies" forum in Concord, New Hampshire, today, where he announced that if he is elected president in 2016, his first act will be to deploy the military in Washington to force Congress to reverse cuts to the defense and intelligence budgets. 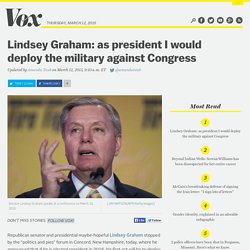 Yes, you heard that right. Here are Graham's exact words: And here's the first thing I would do if I were president of the United States. I wouldn't let Congress leave town until we fix this. House GOP approves more tax breaks without paying for them. At this point, congressional Republicans no longer even try to justify the rhetorical contradictions. 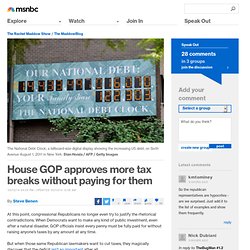 When Democrats want to make any kind of public investment, even after a natural disaster, GOP officials insist every penny must be fully paid for without raising anyone’s taxes by any amount at any time. But when those same Republican lawmakers want to cut taxes, they magically discover that the deficit isn’t so important after all. The House on Thursday passed two bills to permanently extend tax credits that expired at the end of 2013 despite veto threats from the Obama administration. The more expensive of the two tax measures the House passed, 272-144, extends a provision known as Section 179 that allows small businesses to write off up to $500,000 worth of investments a year. […] The House also passed, 263-155, a pair of incentives, packaged together in one bill, to help a type of small business known as S corporations.

Marco Rubio demanded people look at the science on abortion. So we did. "Science is settled," Sen. 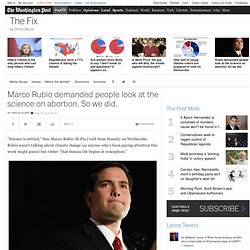 Marco Rubio (R-Fla.) told Sean Hannity on Wednesday. Rubio wasn't talking about climate change (as anyone who's been paying attention this week might guess) but rather "that human life begins at conception. " Senator Marco Rubio delivers a speech on November 2, 2010 in Coral Gables, Florida. (Photo by Joe Raedle/Getty Images) Rubio's comments were predicated on his recent remarks that downplayed the role of humans in causing climate change. "All these people always wag their finger at me about 'science' and 'settled science.'," he told Hannity. We reached out to the American College of Obstetricians and Gynecologists, an association comprised of a large majority of the nation's ob-gyns. New study badly undermines GOP position on sequester. In a rational world, a new study that came out today on income equality would constitute a major blow to the GOP argument on the sequester. 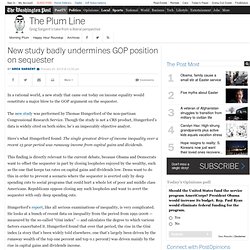 The new study was performed by Thomas Hungerford of the non-partisan Congressional Research Service. Though the study is not a CRS product, Hungerford’s data is widely cited on both sides; he’s an impeccably objective analyst. Here’s what Hungerford found: The single greatest driver of income inequality over a recent 15 year period was runaway income from capital gains and dividends. This finding is directly relevant to the current debate, because Obama and Democrats want to offset the sequester in part by closing loopholes enjoyed by the wealthy, such as the one that keeps tax rates on capital gains and dividends low. Meet the 40 Senate Republicans Who Betrayed Veterans By Killing $1 Billion in Jobs. By: Jason Easley September 19th, 2012 see more posts by Jason Easley Forty Republican members of the United States Senate betrayed veterans today when decided that denying President Obama a victory was more important than spending $1 billion to create jobs for vets.

The Veterans Job Corps Act of 2012 would have spent $1 billion over five years to put veterans to work tending to federal lands, and in the nation’s police and fire departments. Sen. Texas May Restore Some Family-Planning Budget Cuts. Tamir Kalifa for The Texas Tribune Nereyda Penaloza is examined during a visit to the women’s health center at CommUnityCare in Austin. “It’s a much better way to treat the women because they don’t just have family-planning issues,” said Senator Robert Deuell, Republican of Greenville, a family physician who has advocated an increase in primary-care services for women. Using taxpayer dollars to finance family-planning services has become politically thorny in Texas, largely because of Republican lawmakers’ assertions that the women’s health clinics providing that care are affiliated with providers.

In the fiscal crunch of 2011, the Legislature cut the state’s family-planning budget by two-thirds, with some lawmakers claiming that they were defunding the “abortion industry.” U.S. Senate Republicans block equal pay measure.