Fasciclin domain. In molecular biology, the fasciclin domain (FAS1 domain) is an extracellular domain of about 140 amino acid residues. 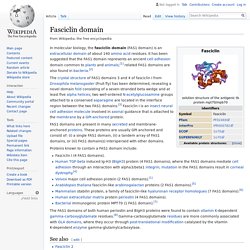 It has been suggested that the FAS1 domain represents an ancient cell adhesion domain common to plants and animals;[1] related FAS1 domains are also found in bacteria.[2] The crystal structure of FAS1 domains 3 and 4 of fasciclin I from Drosophila melanogaster (Fruit fly) has been determined, revealing a novel domain fold consisting of a seven-stranded beta wedge and at least five alpha helices; two well-ordered N-acetylglucosamine groups attached to a conserved asparagine are located in the interface region between the two FAS1 domains.[3] Fasciclin I is an insect neural cell adhesion molecule involved in axonal guidance that is attached to the membrane by a GPI-anchored protein. FAS1 domains are present in many secreted and membrane-anchored proteins. Proteins known to contain a FAS1 domain include: See also[edit] The Karl Lab. DR. 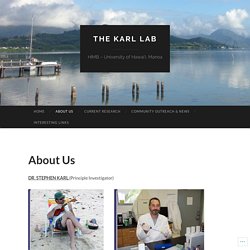 STEPHEN KARL (Principle Investigator) Dr. Steve Karl is a Full Research Professor at the Hawaiʻi Institute of Marine Biology through the University of Hawaiʻi, Mānoa. His interests in marine biology began as a child jumping from tide pool to tide pool in New England. He earned his Bachelor of Arts from the University of California, Santa Barbara in 1981 and worked on a variety of marine ecology projects in southern California until entering graduate school at the University of Georgia in 1987. Karl_CV_2015 BEN WAINWRIGHT (graduate student) Ben is a Ph.D. student studying connectivity in Indonesia using 14 taxa with a wide range of dispersal potentials, allowing them to act as model species for organisms that have similar life histories and dispersal patterns. 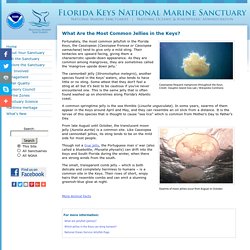 Credit: Dauphin Island Sea Lab / Wikipedia Commons Fortunately, the most common jellyfish in the Florida Keys, the Cassiopeas (Cassiopea fronosa or Cassiopea xamachana) tend to give only a mild sting. Their tentacles are upward facing, giving them a characteristic upside-down appearance. As they are common among mangroves, they are sometimes called the ‘mangrove upside down jelly.’ The cannonball jelly (Stromolophus melegris), another species found in the Keys’ waters, also tends to have little or no sting. The Uniquely Talented and Intelligent Octopus. The octopus has advanced intelligence despite 500 million years of separate evolution from mammals, birds, insects and reptiles. 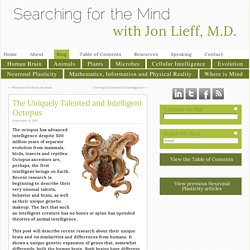 Octopus ancestors are, perhaps, the first intelligent beings on Earth. Recent research is beginning to describe their very unusual talents, behavior and brain, as well as their unique genetic makeup. The fact that such an intelligent creature has no bones or spine has upended theories of animal intelligence. This post will describe recent research about their unique brain and its similarities and differences from humans. 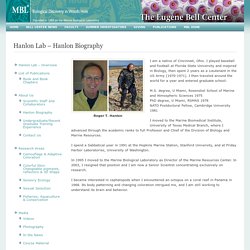 Hanlon I am a native of Cincinnati, Ohio. I played baseball and football at Florida State University and majored in Biology, then spent 2 years as a Lieutenant in the US Army (1970-1971). I then traveled around the world for a year and entered graduate school: M.S. degree, U Miami, Rosenstiel School of Marine and Atmospheric Sciences 1975 PhD degree, U Miami, RSMAS 1978 NATO Postdoctoral Fellow, Cambridge University 1981 I moved to the Marine Biomedical Institute, University of Texas Medical Branch, where I advanced through the academic ranks to full Professor and Chief of the Division of Biology and Marine Resources.

Center for Drug DIscovery and Innovation. Deep Intellect. ON AN UNSEASONABLY WARM day in the middle of March, I traveled from New Hampshire to the moist, dim sanctuary of the New England Aquarium, hoping to touch an alternate reality. 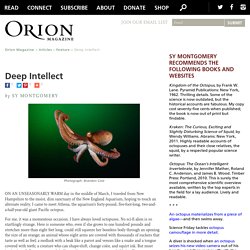 I came to meet Athena, the aquarium’s forty-pound, five-foot-long, two-and-a-half-year-old giant Pacific octopus. For me, it was a momentous occasion. I have always loved octopuses. No sci-fi alien is so startlingly strange. Here is someone who, even if she grows to one hundred pounds and stretches more than eight feet long, could still squeeze her boneless body through an opening the size of an orange; an animal whose eight arms are covered with thousands of suckers that taste as well as feel; a mollusk with a beak like a parrot and venom like a snake and a tongue covered with teeth; a creature who can shape-shift, change color, and squirt ink. Not long ago, a question like this would have seemed foolish, if not crazy. I had always longed to meet an octopus. Outlook Web App. Larger Pacific striped octopus - Wikipedia. The larger Pacific striped octopus is a species of octopus that has received recent media attention for to its intelligence and gregarious nature.[1] Unlike other octopus species which are normally solitary, the larger Pacific striped octopus is reported as forming groups of up to 40 individuals.[2][3] And while most octopuses are cannibalistic, and have to exercise extreme caution while mating, these octopuses mate with their ventral sides touching, pressing their beaks and suckers together in an intimate embrace.[4] The larger Pacific striped octopus is very different from other species in other ways as well. 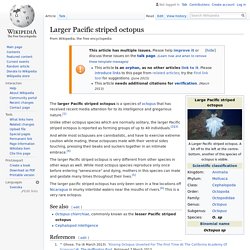 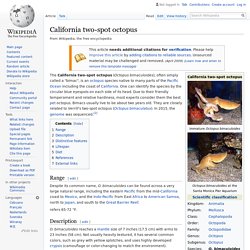 One can identify the species by the circular blue eyespots on each side of its head. Due to their friendly temperament and relative hardiness, most experts consider them the best pet octopus. Bimacs usually live to be about two years old. Common octopus - Wikipedia. The common octopus (Octopus vulgaris) is a mollusc belonging to the class Cephalopoda. 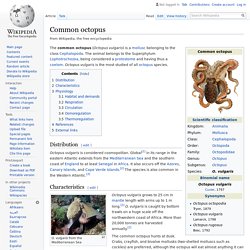 The animal belongs to the Superphylum Lophotrochozoa, being considered a protostome and having thus a coelom. Octopus vulgaris is the most studied of all octopus species. Distribution[edit] Octopus vulgaris is considered cosmopolitan. Global[1] in its range in the eastern Atlantic extends from the Mediterranean Sea and the southern coast of England to at least Senegal in Africa. Characteristics[edit] O. vulgaris from the Mediterranean Sea. Longfin inshore squid - Wikipedia. The longfin inshore squid (Doryteuthis pealeii) is a species of squid of the family Loliginidae. 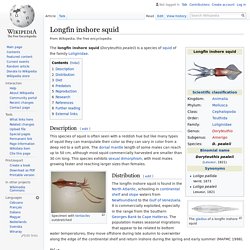 Description[edit] Distribution[edit] Diet[edit] "The diet of the longfin inshore squid changes with size; small immature individuals feed on planktonic organisms while larger individuals feed on crustaceans and small fish. Studies showed that juveniles fed on euphausiids and arrow worms, while older individuals fed mostly on small crabs, but also on polychaetes and shrimp. Predators[edit] Doryteuthis plei - Wikipedia. Doryteuthis plei, also known as the slender inshore squid or arrow squid, is a medium-sized squid belonging to the family Loliginidae. It occurs abundantly in coastal waters of the Atlantic Ocean, from Argentina northward to North Carolina.