Is this future of the Internet of Things? Imagine that your home security system lets you know when your kids get home from school. 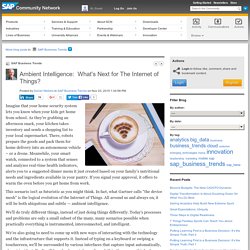 As they're grabbing an afternoon snack, your kitchen takes inventory and sends a shopping list to your local supermarket. There, robots prepare the goods and pack them for home delivery into an autonomous vehicle – or a drone. Meanwhile, your smart watch, connected to a system that senses and analyzes real-time health indicators, alerts you to a suggested dinner menu it just created based on your family’s nutritional needs and ingredients available in your pantry. If you signal your approval, it offers to warm the oven before you get home from work.

This scenario isn't as futuristic as you might think. Administrative Application. SiteWhere is distributed with an HTML5 administrative application that provides an easy way to create and maintain SiteWhere data without having to do everything via the REST services. 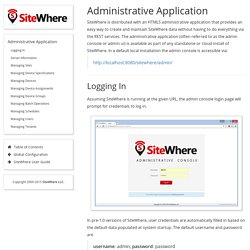 The administrative application (often referred to as the admin console or admin ui) is available as part of any standalone or cloud install of SiteWhere. In a default local installation the admin console is accessible via: Logging In Assuming SiteWhere is running at the given URL, the admin console login page will prompt for credentials to log in. In pre-1.0 versions of SiteWhere, user credentials are automatically filled in based on the default data populated at system startup. Username: admin, password: password The login credentials authenticate against the SiteWhere user model, which is populated with a single default user account upon the first system startup. Server Information. ZUtA - The Portable Pocket Printer. Home is where the smart is! It’s that time of the year again — the exciting rush right after the holidays and fresh on the heels of 2015 International CES in Las Vegas. 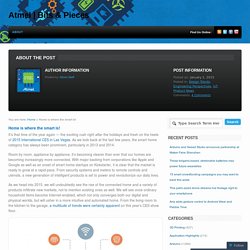 As we look back at the last few years, the smart home category has always been prominent, particularly in 2013 and 2014. Room by room, appliance by appliance, it’s becoming clearer than ever that our homes are becoming increasingly more connected. With major backing from corporations like Apple and Google as well as an onset of smart home startups on Kickstarter, it is clear that the market is ready to grow at a rapid pace. From security systems and meters to remote controls and utensils, a new generation of intelligent products is set to power and revolutionize our daily lives.

Welcome to Forbes. Samsung, Arm and Nest launch Thread Group to tie home IoT devices together. Google’s Nest subsidiary and heavy hitters including Samsung Electronics and Arm Holdings are launching the latest bid to make sensors, cameras, appliances and other devices in homes easily talk to each other. 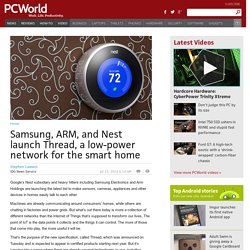 Machines are already communicating around consumers’ homes, while others are chatting in factories and power grids. But what’s out there today is more a collection of different networks than the Internet of Things that’s supposed to transform our lives. The point of IoT is the data points it collects and the things it can control. The more of those that come into play, the more useful it will be. That’s the purpose of the new specification, called Thread, which was announced on Tuesday and is expected to appear in certified products starting next year. IoT spans many areas, including far-flung factories and transportation networks, but homes may see the most closely watched new Internet devices in the next few years. VIPER: the Python IoT Design suite for Arduino, UDOO & Spark by TOI ThingsOnInternet. With VIPER you can design and prototype the objects of the future! 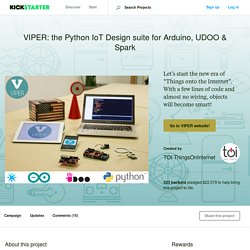 This is the VIPER Daily Life Assistant we built in collaboration with the designer Zhiyao Chen from MBVision Using VIPER is very easy! You just need to download a single package from our website, and unpack it on your computer or on a USB stick. Internet of Things Technologies- Postscapes. The "Internet of Things" covers a huge scope of industries and applications. 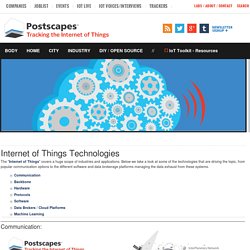 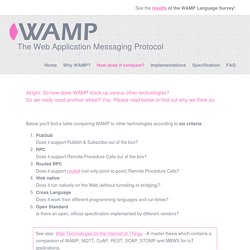 So how does WAMP stack up versus other technologies? Do we really need another wheel? Yes. 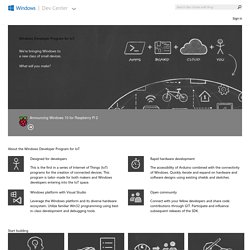 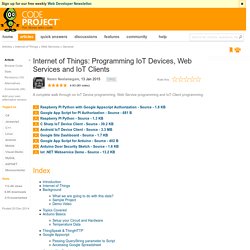 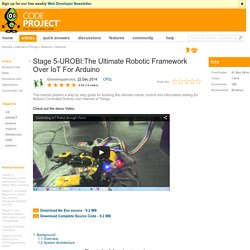 Background 1.1 Overview 1.2 System Architecture. Kura - Open Source framework for IoT. Node-RED. RasPi IoT Development Kit: ThingBox- Postscapes. ThingBox, from the folks at FunDaTrix (itself the consumer-oriented arm of French software company Digital Airways), is a free and open-source project designed to let casual coders easily create programs for the Internet of Things. All you need is a Raspberry Pi and a little bit of technical know-how (but much, much less than a professional developer). “The Thingbox provides a ready-to-use, ‘all in one’ IoT software package that can be used by non-developers,” explained Digital Airways co-founder Nicolas Silberzahn in an email to Postscapes.

The software includes the MQTT protocol for letting devices talk to one another and an HTTP server platform built on Node.js -- though the target user shouldn’t need to know much, if anything, about that. Tracking the Internet of Things: Postscapes. System Overview — SiteWhere 0.9.6 documentation. Shimmer ExG Module. Shimmer ExG Module The Shimmer3 ExG module* provides a configurable digital front-end, optimised for the measurement of physiological signals such as ECG and EMG. *Shimmer3 baseboard and accessories not included. HTML5 WebSocket Powered Realtime Messaging Service. Building MongoDB into your Internet of Things: A Tutorial. With the Internet of Things (IoT) poised to start pouring data into your organization, we thought it would be a good time to show you how you can bring that data into MongoDB so you can start analyzing it.

In this article, we’re going to build a simple data acquisition device, use a common IoT protocol to efficiently get its data to a server, and then we’ll show how to plug into that server and turn the acquired data into a time series document in a MongoDB collection. More specifically we’re using a standard protocol, MQTT, for moving the data from an Arduino-based temperature sensor to a message broker and then use just over 32 lines of JavaScript to move that data into MongoDB. And we’ll show you how you can put this together yourself. For this, we are going to start with a single thing in our Internet of Things – a temperature sensor running on an Arduino micro-controller board.

IoT servers. IoT devices. Communications content from Electronic Design. Network everything! That’s the battle cry of the movement called the Internet of Things (IoT), or according to some, the Internet of Everything (IoE). Whatever the name, a major campaign is now underway to push along its long-awaited implementation. Most visible within this undertaking is machine-to-machine (M2M) connectivity. M2M is IoT. It’s taking time to become accustomed to this idea, but progress is being made in achieving the ultimate goal—a network connecting practically all physical devices. The first generation back in the 1970s and 1980s involved the ARPANET and the linking of the military, government agencies, and selected universities throughout the U.S. Technology - Sensinode Ltd. Sensinode is a technology leader for the Internet of Things, offering the latest open standard IP and Web technology optimized for constrained devices and networks.

Clients & Developer Tools. RabbitMQ is officially supported on a number of operating systems and several languages. In addition, the RabbitMQ community has created numerous clients, adaptors and tools that we list here for your convenience. IoT Internet of Things Resource Toolkit. MQTT. How it works - panStamp.