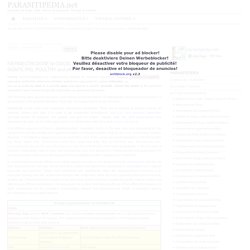 National regulatory authorities determine whether a product is approved for a given indication, i.e. use on a particular host at a specific dose and against a specific parasite. Check the labels of the products available in your country for specific information on approved indications. The following table reproduces some usual dosing recommendations for ivermectin issued by manufacturers or documented in the scientific literature. They may not be approved in some countries. Ivermectin is the most used veterinary antiparasitic worldwide. Ivermectin inhibits canine mammary tumor growth by regulating cell cycle progression and WNT signaling. 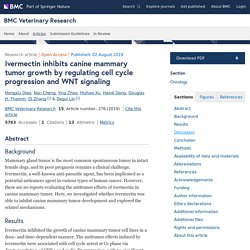 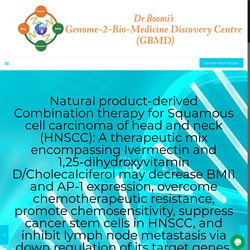 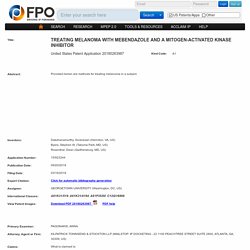 Provisional Application No. 62/472,374, filed Mar. 16, 2017, the entirety of which is incorporated by reference herein. It is estimated that, in 2017, about 87,110 new skin melanomas will be diagnosed and 9,940 people are expected to die of melanoma. Despite recent advances in treatment, the majority of patients with metastatic melanoma are likely to die of their disease.

Provided herein are methods for treating melanoma in a subject. The methods comprise administering, to a subject with melanoma, a wildtype BRAF inhibitor and a mitogen-activated protein kinase (MEK) inhibitor. FIG. 1A shows the structure of mebendazole (MBZ) with wildtype BRAF (BRAFWT) (left) or BRAFV600E (right), showing residues critical for binding; hydrogen bonds are shown as dotted lines. FIG. 1B shows a structure overlay of BRAFWT and BRAFV600E with MBZ. FIG. 1C is a table showing MBZ inhibition of kinase activity and binding affinities for different targets. 1. Mebendazole as a Candidate for Drug Repurposing in Oncology: An Extensive Review of Current Literature. Recent studies suggest that microtubule inhibitors synergize with ionizing radiations (IRs) not only during mitosis, but also during interphase [49] by interfering with the trafficking of DNA damage response proteins (DDRp). 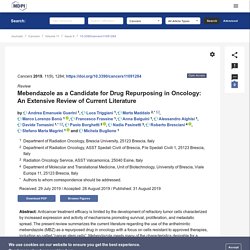 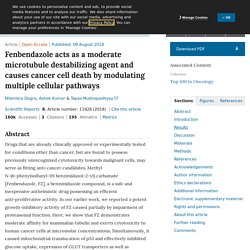 Results from in vitro studies using enriched extracts of helminthic and mammalian tubulin have suggested that tubulin is the primary molecular target of the benzimidazoles18. Therefore, to examine the effect of FZ on mammalian microtubule network organization, human non small cell lung carcinoma (NSCLC) A549 cells were treated with 1 uM FZ for 24 h and processed for immunofluorescence using α tubulin antibody. Colchicine was used as a positive control. Results showed that FZ treatment caused a partial alteration of the microtubule network (Fig. 1a). FZ treatment alters tubulin network of human cancer cells. The effect of FZ on tubulin polymerization was further evaluated by an in vitro assay. Tubulin acetylation has been associated with the stability of microtubules. A Cancer Cure Has Gotten Out of Control. While Wall Street awaits the entry of over 1,813 new cancer drugs into human clinical trials representing billions of dollars of investment capital, the announcement of a bona fide cure for cancer comes from an outsider – patient Joe Tippens. 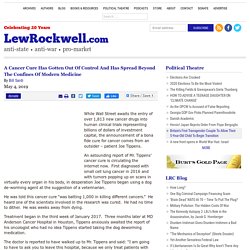 An astounding report of Mr. Tippens’ cancer cure is circulating the internet now. First diagnosed with small cell lung cancer in 2016 and with tumors popping up on scans in virtually every organ in his body, in desperation Joe Tippens began using a dog de-worming agent at the suggestion of a veterinarian. He was told this cancer cure “was batting 1,000 in killing different cancers.” He heard one of the scientists involved in the research was cured. Dog dewormer is very effective vs cancers; Articles & patents. Rexresearch.com Fenbendazole vs Cancer Fenbendazole Related: Mebendazole vs cancer 26 April 2017 Oklahoma grandfather who claims a drug for DOGS cured him of 'head-to-toe' cancer is tumor-free two years after doctors gave him three months to live By Natalie Rahhal. 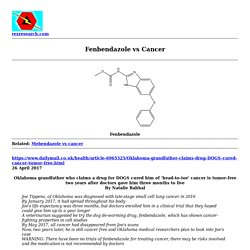 A Drug Made for Animals and Taken by Humans to Treat Cancer: Fenbendazole - Blog: Cancer Treatments - from Research to Application. From anti-worms to anti-cancer Previously, we discussed on this website the anti-worm drug Mebendazole (Ref.), which based on a good amount of scientific and clinical evidence, shows relevant anti cancer potential. 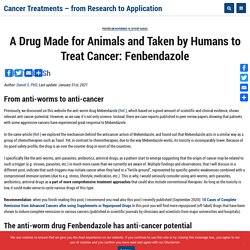 Indeed, there are case reports published in peer review papers showing that Mebendazole can induce anti-cancer response in some aggressive cancers. In the same article (Ref.) we explored the mechanism behind the anticancer action of Mebendazole, and found out that Mebendazole acts in a similar way as a group of chemotherapies such as Taxol. Yet, in contrast to chemotherapies, due to the way Mebendazole works, its toxicity is incomparably lower. Because of its good safety profile, the drug is an over the counter drug in most of the countries. Repurposing Drugs in Oncology (ReDO)—mebendazole as an anti-cancer agent - ecancer. 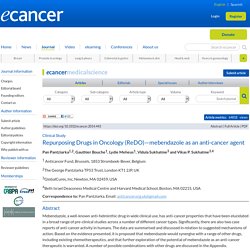 Materials and Methods: We used EMT6 mouse mammary tumor cells in cell culture and as solid tumors in mice to examine the cytotoxic and antitumor effects of fenbendazole as a single agent and in combination regimens. Results: Intensive treatments with fenbendazole were toxic to EMT6 cells in vitro; toxicity increased with incubation time and under conditions of severe hypoxia. Disclosure of complementary medicine use to medical providers: a systematic review and meta-analysis.

The effects of mebendazole and fenbendazole on Trichinella spiralis in mice. - PubMed - NCBI. The professor who 'cured' his cancer with a cocktail of everyday pills and 20 years on remains disease-free. “I’d been told that my chemotherapy wouldn’t get rid of the tumour completely or indefinitely, so I focused on finding agents that might make chemo work better for me,” he says.

Sure enough, after his fourth round of chemotherapy in 1996, Prof Williams’s tumour had vanished. It has never returned and thousands of people, including oncologists, have sought his advice since on ''beating'' a cancer known in medical circles as “The Terminator”. Man having an MRI scan (Alamy) In mainstream oncology Professor Williams is considered a freak case and his strategy of fighting cancer “using every potentially efficacious agent I could lay my hands on” attracts suspicion.

Veterinary Drug Formulary2014 English. MacrocyclicLactones. Ajvr 65 6 752. Ivermectin modification maximum residue limits summary report 5 committee veterinary medicinal en. Journal of the American Animal Hospital Association. This site uses cookies to improve performance. If your browser does not accept cookies, you cannot view this site. Setting Your Browser to Accept Cookies There are many reasons why a cookie could not be set correctly.

Below are the most common reasons: You have cookies disabled in your browser. Why Does this Site Require Cookies? This site uses cookies to improve performance by remembering that you are logged in when you go from page to page. What Gets Stored in a Cookie? This site stores nothing other than an automatically generated session ID in the cookie; no other information is captured. Toxicology of Avermectins and Milbemycins (Macrocylic Lactones) and the Role of P-Glycoprotein in Dogs and Cats. Use Ivermectin with Extreme Caution. By Dr. Becker Ivermectin is an anti-parasite medication given to dogs to prevent heartworm disease and to treat various other parasite-related conditions like demodectic and sarcoptic mange, and ear mites.As a heartworm preventive, ivermectin is the active ingredient in products including:Ivomec® and Heartgard® by Merial Zimectrin® by Farnam Iverhart® by Virbac Tri-Heart® by Intervet Various generics Ivermectin works by causing neurological damage to specific parasites, which results in paralysis and death.