New Zealand Ban on “Trolling” New Zealand recently passed a law designed to outlaw cyberbullying and give victims a measure of protection. 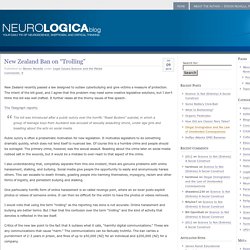 The intent of the bill good, and I agree that this problem may need some creative legislative solutions, but I don’t think this bill was well crafted. It further raises all the thorny issues of free speech. The Telegraph reports: The bill was introduced after a public outcry over the horrific “Roast Busters” scandal, in which a group of teenage boys from Auckland was accused of sexually assaulting drunk, under age girls and boasting about the acts on social media. Ten states pass anti-patent-troll laws, with more to come. The anti-patent-troll bill passed by the US House of Representatives last year appears to have stalled in the Senate Judiciary Committee. 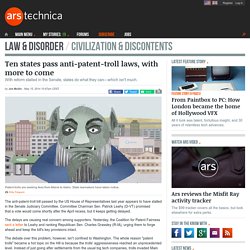 Committee Chairman Sen. Patrick Leahy (D-VT) promised that a vote would come shortly after the April recess, but it keeps getting delayed. The delays are causing real concern among supporters. Yesterday, the Coalition for Patent Fairness sent a letter to Leahy and ranking Republican Sen. Charles Grassley (R-IA), urging them to forge ahead and keep the bill's key provisions intact. The debate over this problem, however, isn't confined to Washington. As states kicked off their legislative sessions this winter, lawmakers responded to the threats against small businesses by writing bills that would ban "bad faith patent assertions" as a violation of consumer-protection laws. A total of 27 states have considered such bills, with ten of those states already having passed anti-patent-troll laws. 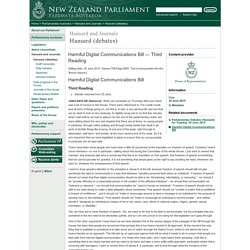 JONO NAYLOR (National): When we concluded on Thursday afternoon there was a bit of humour in the House. There were references to The Castle movie and all sorts of things going on, but this is, in fact, a very serious bill, and one that we do need to look at very seriously. To slightly recap just in my first few minutes what I said before we had to adjourn for the end of the parliamentary week, we were talking about the very bad impacts that there are at times, on young people in particular, through online bullying and through social media that result in all sorts of terrible things like truancy, at one end of the scale, right through to depression, self-harm, and suicide, at the more serious end of the scale. 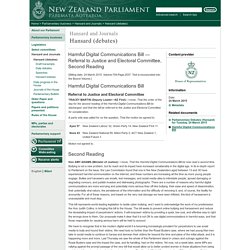 Volume:704;Page:2537. Text is incorporated into the Bound Volume.] TRACEY MARTIN (Deputy Leader—NZ First): I move, That the order of the day for the second reading of the Harmful Digital Communications Bill be discharged, and that the bill be referred to the Justice and Electoral Committee for consideration. Hon AMY ADAMS (Minister of Justice): I move, That the Harmful Digital Communications Bill be now read a second time. Bullying is not a new problem, but its reach and its impact have increased considerably in the digital age. This bill represents world-leading legislation to tackle cyber-bullying, and I want to acknowledge the work of my predecessor, the Hon Judith Collins, in bringing this bill to the House. Harmful digital communications. In this section: Cyberbullying and other modern forms of harassment and intimidation can have a devastating impact on people, especially children and teenagers. 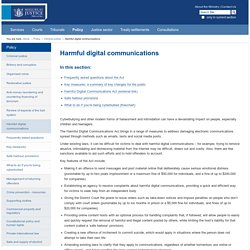 The Harmful Digital Communications Act brings in a range of measures to address damaging electronic communications spread through methods such as emails, texts and social media posts. Under existing laws, it can be difficult for victims to deal with harmful digital communications – for example, trying to remove abusive, intimidating and distressing material from the internet may be difficult, drawn out and costly. Also, there are few sanctions available to aid such efforts and to hold offenders to account. 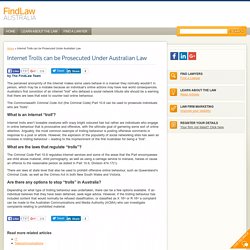 Australia’s first conviction of an internet “troll” who defaced a social network tribute site should be a warning that there are laws that exist to counter bad online behaviour. The Commonwealth Criminal Code Act (the Criminal Code) Part 10.6 can be used to prosecute individuals who are “trolls”. What is an internet “troll’? Internet trolls aren’t loveable creatures with crazy bright coloured hair but rather are individuals who engage in online behaviour that is provocative and offensive, with the ultimate goal of garnering some sort of online attention. Teachers cyberbullying advice. Freedom: Trolling as Freedom of Expression (subtitles) Harmful Digital Communications Act 2015 No 63 (as at 27 November 2015), Public Act.

HRNZ 10 Freedom of opinion and expression.