The SOPA-PIPA Saga - Freedom of Speech vs. Net Neutrality. Many - like me - watched with great interest the defeat of SOPA and PIPA last week. 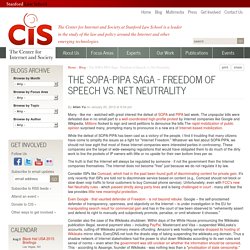 The unpopular bills were defeated due in no small part to a well-coordinated high-profile protest by Internet companies like Google and Wikipedia. Millions flocked to sign and send petitions to denounce the bills.The rapid mobilization of public opinion surprised many, prompting many to pronounce in a new era of Internet-based mobilization. While the defeat of SOPA-PIPA has been cast as a victory of the people, I find it troubling that many citizens have come to simplify the issues as a fight for "Internet Freedom. " Whatever we feel about SOPA-PIPA, we should not lose sight that most of these Internet companies were interested parties in controversy. China and the Internet: Expanding on Lessig’s Regulation Nightmares.

Vasileios Karagiannopoulos * Abstract This paper focuses on the Internet policies of the People’s Republic of China (PRC). 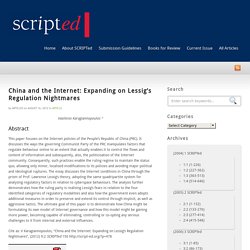 It discusses the ways the governing Communist Party of the PRC manipulates factors that regulate behaviour online to an extent that actually enables it to control the flows and content of information and subsequently, also, the politicisation of the Internet community. Consequently, such practices enable the ruling regime to maintain the status quo, allowing only minor, localised modifications to its policies and avoiding major political and ideological ruptures. The essay discusses the Internet conditions in China through the prism of Prof. Cite as: V Karagiannopoulos, “China and the Internet: Expanding on Lessig’s Regulation Nightmares”, (2012) 9:2 SCRIPTed 150 DOI: 10.2966/scrip.090212.150 © Vasileios Karagiannopoulos 2012. This work is licensed under a Creative Commons Attribution-Noncommercial-No Derivative Works 2.5 UK: Scotland License. 1. 2. 3. 3strikesNZ – Understanding the Copyright (Infringing File Sharing) Law.

Once you’re read the basics, have a look at the Frequently Asked Questions for more information. 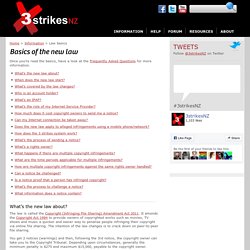 What’s the new law about? The law is called the Copyright (Infringing File Sharing) Amendment Act 2011. It amends the Copyright Act 1994 to provide owners of copyrighted works such as movies, TV shows and music a quicker and easier way to penalise people infringing their copyright via online file sharing. Network Neutrality. 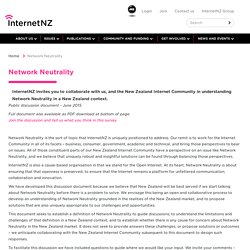 Full document also available as PDF download at bottom of page.Join the discussion and tell us what you think in this survey Network Neutrality is the sort of topic that InternetNZ is uniquely positioned to address. Our remit is to work for the Internet Community in all of its facets – business, consumer, government, academic and technical, and bring those perspectives to bear on issues. All of those constituent parts of our New Zealand Internet Community have a perspective on an issue like Network Neutrality, and we believe that uniquely robust and insightful solutions can be found through balancing those perspectives. InternetNZ is also a cause-based organisation in that we stand for the Open Internet. We have developed this discussion document because we believe that New Zealand will be best served if we start talking about Network Neutrality before there is a problem to solve. We look forward to hearing from you and working with you. 7.1.3 (k). The Project.

A Declaration of the Independence of Cyberspace. By John Perry Barlow <barlow@eff.org> Governments of the Industrial World, you weary giants of flesh and steel, I come from Cyberspace, the new home of Mind. On behalf of the future, I ask you of the past to leave us alone. You are not welcome among us. You have no sovereignty where we gather. We have no elected government, nor are we likely to have one, so I address you with no greater authority than that with which liberty itself always speaks. Introduction - Law Commission Issues Paper 27 - The news media meets new media: rights, responsibilities and regulation in the digital age. The first question posed in our terms of reference is whether it is possible to define ‘news media’ for the purposes of the law? 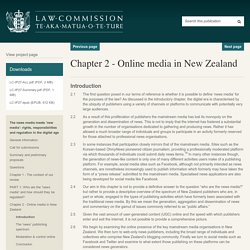 As discussed in the introductory chapter, the digital era is characterised by the ubiquity of publishers using a variety of channels or platforms to communicate with potentially very large audiences. As a result of this proliferation of publishers the mainstream media has lost its monopoly on the generation and dissemination of news. This is not to imply that the internet has fostered a substantial growth in the number of organisations dedicated to gathering and producing news. Rather it has allowed a much broader range of individuals and groups to participate in an activity formerly reserved for those attached to professional news organisations. Are Courts Re-inventing Internet Regulation?

Discussion Paper May 2015 The debate on Internet governance, and freedom of expression on­-line in particular, has largely focused on the place of Internet technology itself in the various regulatory frameworks and principles. 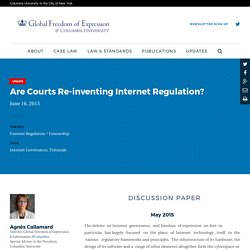 The infrastructure of its hardware, the design of its software and a range of other elements altogether form the cyberspace or the digital world within which human beings connect, inform, communicate, sell and buy, and also harm each other. All technological components (hardware, software, nodes, etc.) are potentially matters for regulation, which greatly impacts on the governance of the Internet, and the protection of human rights and freedom of expression on­-line.

It is easy to see why for many years technology was seen and construed as determining Internet governance and regulation, on-­line values and norms, particularly in view of the relative weaknesses of other actors, states included, in the earlier days of Internet governance. Authors Agnès Callamard. Download Menu.