Meet Google Drive – One place for all your files. InstaGrok.com. Rich Qs - Rebecca's. Woman cooks. Rich Qs - Brooke. Women and WWI - Women in the Workforce: Temporary Men. One immediate result of the war's outbreak was the rise in female unemployment, especially among the servants, whose jobs were lost to the middle-classes' wish to economise. 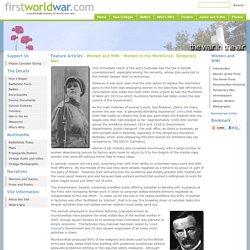 However, it was soon seen that the only option to replace the volunteers gone to the front was employing women in the jobs they had left behind; conscription only made this need even more urgent as had the Munitions of Work Act 1915 by which munitions factories had fallen under the sole control of the Government. As the main historian of women's work, Gail Braybon, claims, for many women the war was "a genuinely liberating experience" (link) that made them feel useful as citizens but that also gave them the freedom and the wages only men had enjoyed so far. Women's job mobility also increased enormously, with a large number of women abandoning service for factory work never to return to it to the chagrin of the middle-class women that were left without home help in many cases.

Gallipoli: The New Zealand Story. Pengelly, Edna – Biography. Page 1 Pengelly, Edna Teacher, civilian and military nurse, matron This biography was written by Jan Rodgers and was first published in the Dictionary of New Zealand BiographyVolume 3, 1996 Edna Pengelly was born in Canada on 5 July 1874, the daughter of Laura Ann Brown and her husband, William Pengelly. 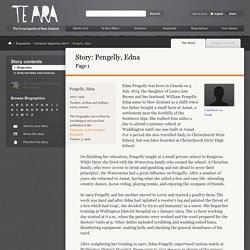 Edna came to New Zealand as a child when her father bought a small farm at Annat, a settlement near the foothills of the Southern Alps. On finishing her education, Pengelly taught at a small private school in Rangiora. In 1902 Pengelly and her mother moved to Levin and started a poultry farm. After completing her training in 1907, Edna Pengelly supervised various wards at Wellington District Hospital. In 1915 Edna Pengelly applied to join the New Zealand Army Nursing Service. From 1915 to 1919 Pengelly served at military hospitals in Egypt and England. For the next seven years Pengelly took charge of a private hospital in Hobson Street, Wellington. Edna Pengelly never married. 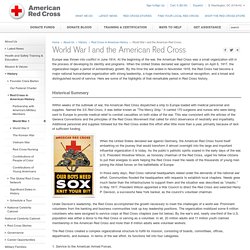 Named the SS Red Cross, it was better known as “The Mercy Ship.” It carried 170 surgeons and nurses who were being sent to Europe to provide medical relief to combat casualties on both sides of the war. This was consistent with the articles of the Geneva Conventions and the principles of the Red Cross Movement that called for strict observance of neutrality and impartiality. Additional personnel and supplies followed but the Red Cross ended this effort after little more than a year, primarily because of lack of sufficient funding. When the United States declared war against Germany, the American Red Cross found itself embarking on the journey that would transform it almost overnight into the large and important influential organization it is today. Heritage Images - Homepage - Auckland Libraries.

11 Women Warriors of World War II. There are more stories of heroism out of World War II than can ever fit in a school textbook, but hundreds of those stories are written down somewhere for those who want to find them. 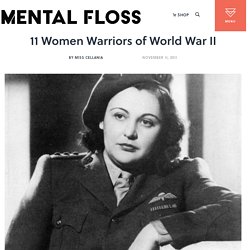 Over 100 million military personnel participated in the war, including many women. Here are the stories of eleven of these brave women. They are from many countries, and they all did their part and more for the Allied effort. 1. Nancy Wake: Guerrilla Fighter Born in New Zealand and raised in Australia, Nancy Wake was a journalist in New York and London and then married a wealthy Frenchman and was living in Marseille when Germany invaded. Wake ran for political office a few times in Australia, and remarried in the 1950s. 2. Lieutenant Elsie S. 3. Natalia Peshkova was drafted into the Russian Army straight out of high school at age 17. 4.

Englishwoman Susan Travers was a socialite living in France when the war broke out. 5. Lt. Whittle's status as a POW was undocumented by the U.S. military. First World War.com - A Multimedia History of World War One. Anzac Day - Anzac Day. Anzac Day occurs on 25 April. 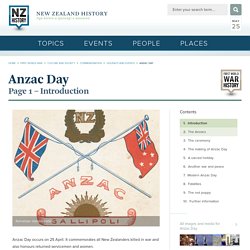 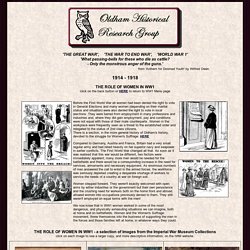 They were barred from employment in many professions and industries and, where they did gain employment, pay and conditions were not equal with those of their male counterparts. Women in the workplace were frequently seen as a threat to the established order and relegated to the status of 2nd class citizens. There is a section, in the more general history of Oldham's history, devoted to the struggle for Women's Suffrage: HERE Compared to Germany, Austria and France, Britain had a very small regular army and had relied heavily on her superior navy and seapower in earlier conflicts.

Impact of WWI on Women. BBC Schools - Home front. 19 March 2014Last updated at 12:03 Women took on many roles during World War One including working in offices, factories and on the land Before World War One began, men were thought of as the 'breadwinners', bringing in the weekly wage. 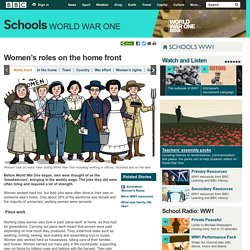 The jobs they did were often tiring and required a lot of strength. Women worked hard too, but their jobs were often done in their own or someone else's home. Women before and after ww1. WW100 New Zealand.