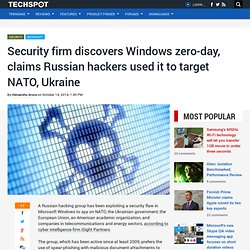 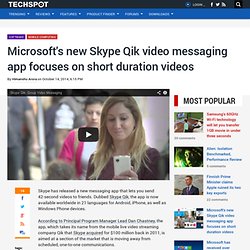 Dubbed Skype Qik, the app is now available worldwide in 21 languages for Android, iPhone, as well as Windows Phone devices. According to Principal Program Manager Lead Dan Chastney, the app, which takes its name from the mobile live video streaming company Qik that Skype acquired for $100 million back in 2011, is aimed at a section of the market that is moving away from scheduled, one-to-one communications. Feature-wise, Skype Qik reminds us of a lot of other popular apps. For example, like Vine, the app lets you send short duration videos; you sign up for the service with your phone number, an approach already followed by Whatsapp and Viber; and every message lasts exactly 2 weeks, a nod to the ephemeral messaging system popularized by Snapchat.

Tech Justice: Social Justice Emerges From the High Tech Arena  Nadeem Mazen is a co-founder of two tech and arts-based businesses and is a City Councillor in Cambridge, MA The digital divide is slowly closing, and that's good for social justice causes. 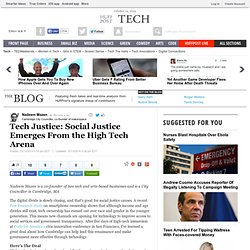 A recent Pew Research study on smartphone ownership shows that although income and age divides still exist, tech ownership has evened out over race and gender in the younger generation. This means new channels are opening for technology to improve access to social services and government transparency. After five days of high-tech immersion at Code for America's civic innovation conference in San Francisco, I've learned a great deal about how Cambridge can help lead this renaissance and make government more effective through technology. 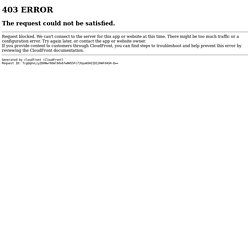 Originally a sort of online journal full of mundane personal updates, web logs have morphed into an extremely powerful form of communication. They were once shunned by the mainstream — now they are the mainstream. Whether it’s breaking tech news, an insider’s point of view, or irreverent humor you’re seeking, there are an infinite number of blogs on any subject whose authors will be happy to oblige. It shouldn’t be any surprise that the tech world embraced the blogosphere far before every newspaper in the country started making their writers blog alongside their standard news stories. Healthcare IT Leaders Announces the 2014 Best Healthcare IT Blogs. From code update delays to IT skills shortages, the health IT blog community effectively maps the long and winding road to health IT. 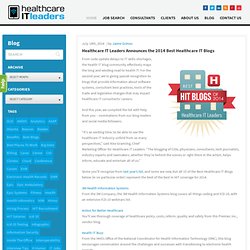 For the second year, we’re giving special recognition to blogs that provide information about software systems, consultant best practices, tools of the trade and legislative changes that may impact healthcare IT consultants’ careers. And this year, we compiled the list with help from you – nominations from our blog readers and social media followers. Technology Blogs. There is no shortage of cybersecurity talent - only of employers willing to retrain their existing staff or recruit trainees - When IT Meets Politics. I have said this before and I will say it again, when I blog on the next stage of the work with which I have agreed to help e-Skills, but the objective of this blog is to draw your attention to some of the FREE training available to upgrade the basic security skills of all staff, whether in large firms or SMEs. 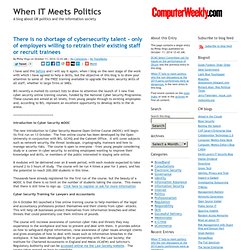 BIS recently e-mailed its contact lists to draw to attention the launch of 3 new free cyber security online training courses, funded by the National Cyber Security Programme. These courses are aimed at all levels, from young people through to existing employees and, according to BIS, represent an excellent opportunity to develop skills in the IA arena. Inspiring the next generation of female tech pioneers - Ada Lovelace Day 2014 - WITsend. This is a guest blog by Catherine Scutt, head of creative teaching & learning at the Girls' Day School Trust (GDST) Ada Lovelace (1815-1852) was a bona fide 'game changer'. 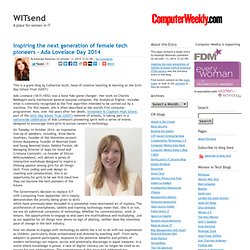 Her work on Charles Babbage's early mechanical general-purpose computer, the 'Analytical Engine', includes what is commonly recognised as the first algorithm intended to be carried out by a machine. For this reason, she is often described as the world's first computer programmer. Blog: IT Automation Without Boundaries. Rootvg: Block level storage vs. file level storage: A comparison. Takeaway: Block level storage sales have gone through the roof as more businesses realize its flexibility. 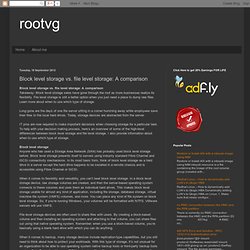 File level storage is still a better option when you just need a place to dump raw files. Learn more about when to use which type of storage. Long gone are the days of one file server sitting in a corner humming away while employees save their files to the local hard drives. Today, storage devices are abstracted from the server. IT pros are now required to make important decisions when choosing storage for a particular task. Block level storage Anyone who has used a Storage Area Network (SAN) has probably used block level storage before.