LING VR. Based on mobile gyroscope, all game and software in LING VR support 360 view. 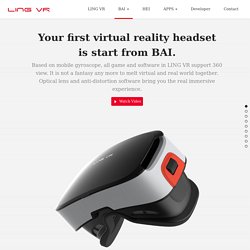 It is not a fantasy any more to melt virtual and real world together. Optical lens and anti-distortion software bring you the real immersive experience. Watch Video The composition with mobile phone create cinema experience, making the world in front of you do not limit to the screen size of phone. Enjoy the feast of private cinema without go outside. BAI brings you into the game world, to feel the moment of life and death with real vision. Diving, skiing, flying, bungee jumping and even free falling, you can experience everything that you want but not dare to do at here. 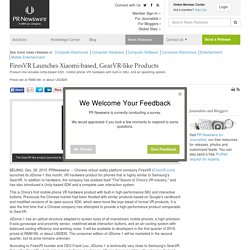 In addition to hardware, the company has dubbed itself "The"Xiaomi of China's VR industry," and has also introduced a Unity-based SDK and a complete user interaction system. This is China's first mobile phone VR hardware product with built-in high-performance IMU and interactive buttons. Previously the Chinese market had been flooded with similar products based on Google's cardboard and modified versions of its open-source SDK, which were more like toys stead of formal VR products.

It is also the first time that a Chinese company has attempted to provide a high-performance product comparable to GearVR. Thank You - IonVR. Wearality. VICO VR DEMO INTRODUCTION. Coming Soon. DotLab VR. VR Expert to Oculus Rift Devs: Make Sure You're Doing 3D Right. It turns out that rendering stereoscopic 3D images is not as simple as slapping two slightly different views side-by-side for each eye. 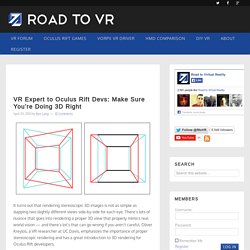 There’s lots of nuance that goes into rendering a proper 3D view that properly mimics real world vision — and there’s lot’s that can go wrong if you aren’t careful. Oliver Kreylos, a VR researcher at UC Davis, emphasizes the importance of proper stereoscopic rendering and has a great introduction to 3D rendering for Oculus Rift developers. The dangers of poor stereoscopic 3D rendering range from eyestrain and headaches to users not feeling right in the virtual world.

The latter of which is the “biggest danger VR is facing now,” Kreylos told me. The subtleties of improper 3D rendering are such that the everyday first-time VR user won’t think, “this is obviously wrong, let me see how to fix it.” Oliver Kreylos is a PhD virtual reality researcher who works at the Institute for Data Analysis and Visualization, and the W.M. Calculating Stereo Pairs. Written by Paul Bourke July 1999 Introduction The following discusses computer based generation of stereo pairs as used to create a perception of depth. 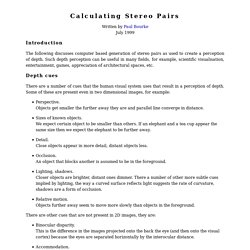 Such depth perception can be useful in many fields, for example, scientific visualisation, entertainment, games, appreciation of architectural spaces, etc. FOV2GO Viewer. FOV2GO Model D Viewer You can construct your own FOV2GO Model D Viewer – for the iPhone 4/4S, the Samsung Galaxy Note, or most Android smart phones – out of foam board and a couple of plastic lenses. 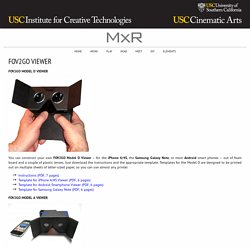 Just download the instructions and the appropriate template. Templates for the Model D are designed to be printed out on multiple sheets of letter-sized paper, so you can use almost any printer. FOV2GO Model A Viewer We have designed a fold out viewer, made from inexpensive laser cut foam core and plastic lenses. FOV2GO Quick Start. Streamer des jeux PC sur un casque Homido. Vous souhaitez gouter aux joies de la VR / PC gaming à la Oculus avec un Homido ? 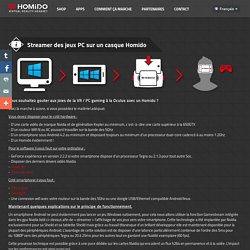 Half Life 2 VR Mod using the Razer Hydra (longer gameplay) Index of ./data/Vireio Perception/ Half-Life 2 VR mod with head tracking (download now) While we're all sitting around holding our breaths waiting for our shipment notifications from Oculus I thought I'd share my Half-Life 2 VR mod I've been working on. 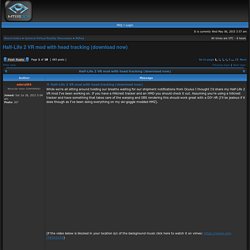 If you have a Hillcrest tracker and an HMD you should check it out. Assuming you're using a hillcrest tracker and have something that takes care of the warping and SBS rendering this should work great with a DIY rift (I'll be jealous if it does though as I've been doing everything on my ski-goggle modded HMZ). (if the video below is blocked in your location b/c of the background music click here to watch it on vimeo: