My Nickname: A Cautionary Tale About Racism  We have seen the devastation that racism can perpetrate when the ignorance and hate embedded within it are allowed to fester in silence at the margins of our society. 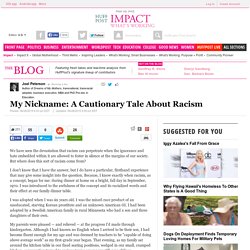 Nadine Burke Harris: How childhood trauma affects health across a lifetime. Recommends Restricted Use of Episiotomies - ACOG. March 31, 2006 Washington, DC -- The use of episiotomy during labor should be restricted, with physicians encouraged to use clinical judgment to decide when the procedure is necessary, according to a new Practice Bulletin published by The American College of Obstetricians and Gynecologists (ACOG) in the April issue of Obstetrics & Gynecology. 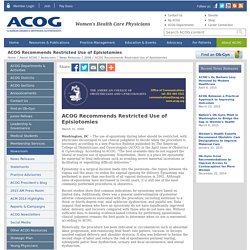 According to ACOG, "The best available data do not support the liberal or routine use of episiotomy. New Favorite Tumblr: Having It Some. The new Tumblr Having It Some aims to be an online repository for companies’ parental and family leave policies. 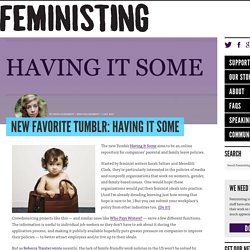 Started by feminist writers Sarah Seltzer and Meredith Clark, they’re particularly interested in the policies of media and nonprofit organizations that work on women’s, gender, and family-based issues. One would hope these organizations would put their feminist ideals into practice. This Poet Created An Incredible Tribute for All The Girls with "Ghetto" Names.

Does trading sex define who you are? In our recently released study, “Surviving the Streets of New York: Experiences of LGBTQ Youth, YMSM and YWSW Engaged in Survival Sex,” Urban Institute researchers trained youth from Streetwise and Safe to interview young people about their experiences engaging in survival sex.

The lead youth researcher, Mitchyll Mora, offered to share his perspective on working on the project and the importance of the study. The “Surviving the Streets of New York: Experiences of LGBTQ youth, YMSM, and YWSW Engaged in Survival Sex” study is unlike others because the majority of the 300 interviews were conducted by young people who either had experiences engaging in survival sex, like me, or were in the community with youth who did. #BlackLivesMatter: A Radical Afro-Descendant Midwifery and Birthing Stance On Systemic Genocide. I have been grieving since the decision was made on Mike Brown. 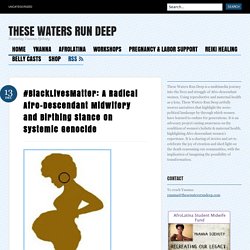 Since I got the news that Akai Gurley was gunned down and that there would be no charges for the murder of Eric Garner. It pains me to think of Amadou Diallo, who was killed when I was in high school in my own neighborhood, walking distance from my after-school program. #BlackLivesMatter is personal to me. And the personal is political. Not Your Idea: Cultural Appropriation in the Birthing Community. I studied every book I could find on childbirth and parenting in my local library when I was pregnant for the third time with my first viable pregnancy nineteen years ago. 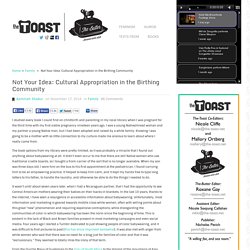 "Did You Ever Mind It?": Thoughts on Race and Adoption. Years ago, two friends sat across from me at their gleaming kitchen table and asked if I thought they should adopt a child. 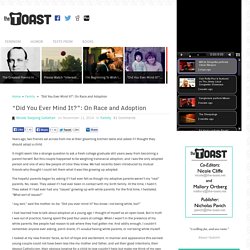 It might seem like a strange question to ask a fresh college graduate still years away from becoming a parent herself. But this couple happened to be weighing transracial adoption, and I was the only adopted person and one of very few people of color they knew. We had recently been introduced by mutual friends who thought I could tell them what it was like growing up adopted. The hopeful parents began by asking if I had ever felt as though my adoptive parents weren’t my “real” parents. No, never. 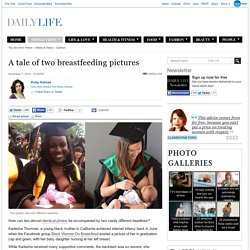 How can two almost identical photos be accompanied by two vastly different headlines? Karlesha Thurman, a young black mother in California achieved internet infamy back in June when the Facebook group Black Women Do Breastfeed posted a picture of her in graduation cap and gown, with her baby daughter nursing at her left breast. While Karlesha received many supportive comments, the backlash was so severe, she eventually deleted the photo. Four months later, Australian woman Jacci Sharkey sent a picture of herself, also with her baby at her left breast, to the University of the Sunshine Coast as a "thank you" for helping her graduate while juggling two children.

The uni found the photo so "amazing", they posted it to their own Facebook page. The Unbearable Whiteness of Pro-Lifers and Pundits. "The question is -- and this is what Barack Obama didn't want to answer: Is that human life a person under the Constitution? 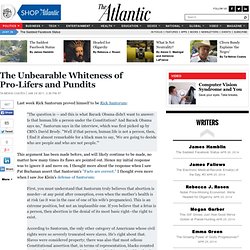 And Barack Obama says no," Santorum says in the interview, which was first picked up by CBN's David Brody. The Unbearable Whiteness of Being « Gazillion Voices. David Amarel. 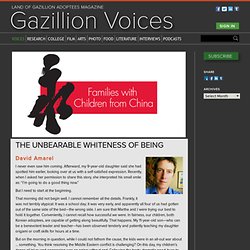 Mascot_stereotype_start_in_childrens_books_an_interview_with_debbie_reese. Your Children Will See Color and There's Nothing You Can Do About It. As much as some folks invest themselves in saying Black women hate to see Black men marry/date/procreate with white women, I don't concern myself with anyone else's partner until I see a Black man telling anyone who will listen why he doesn't desire Black women.

At that point, I'm inclined to believe that their "preference" is actually a self-hating pathology. But I digress. Though the relationships don't bother me, I am often dismayed by how little non-black women with black partners care to know about the realities of life as a Black person in the world. Their Black significant others never seem to get around to that, particular, discussion, and it emboldens them in their claims to post-racialism.